In 1959, two brothers with an entrepreneurial bent, John Bundy Sr. and Russell T. Bundy, founded a commercial bakeware business that, over time with the Bundy family at the helm, grew to become the largest such manufacturer in the world. In 2009, Premier Pan expanded with the creation of USA Pan, a retail brand of commercial-quality bakeware. Today, four generations of the Bundy family operate the businesses out of Pittsburgh, PA, shipping product worldwide out of several production centers located across the United States. 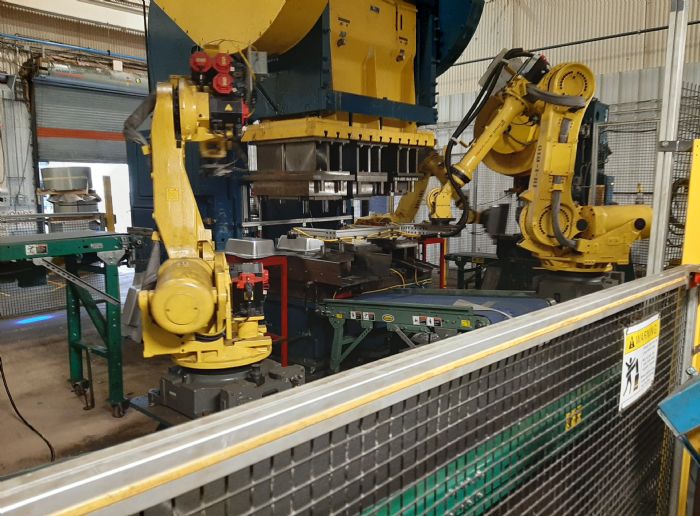 Known for sturdy products with lifetime guarantees, the Premier Pan business relies on sound, efficient and reliable processes, materials and equipment to maintain needed quality. Experience gained on the bakeware front has enabled expansion into other drawn products for other end uses. This includes production of drop-box dryer vents—the focus of this article—at a 115,000-sq.-ft. operation in Crescent, PA. Here, 210 employees operate in two shifts.

Hundreds of machines dot the production floor of USA Pan in Crescent, including gap-frame and straightside mechanical presses to 600-ton capacities, as well as press brakes and CNC machines for tool and die build and repair. Other operations include shearing to create blanks as well as welding and assembly.

The high-performance vents designed by USA Pan are used to protect exhaust ducts in wall connections, prevent fire spread and help dryers perform at peak efficiency. USA Pan sought, in 2019, to switch from a labor-intensive process for production of two styles of drop-box vents to an automated stamping cell, according to robotics engineer Guy Cole, a 10-yr. veteran at the company and tapped to lead the project.

Following more than six months of planning, a cell anchored by three mechanical presses and three robots entered full production in October 2019. Tasked with overseeing operation of the cell: PPC 1000R resolver-based, dual-logic controllers from Cieco Controls, headquartered nearby in Clinton, PA, and a provider of control units for many other USA Pan presses. 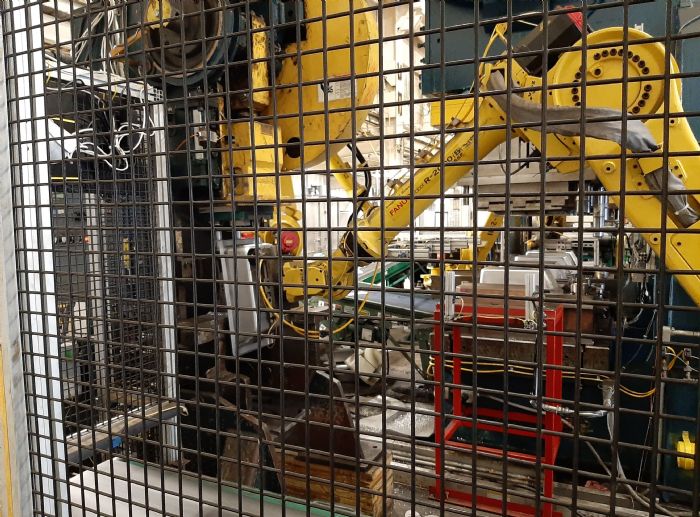 In operation, a new Worldpress TNCF3-series NC servo straightener and feeder with uncoiler feeds 0.028-in.-thick aluminized steel sheet into a straightside press that provides the principal draw forming of the vents, to a depth of 4.25 or 3.5 in. depending on what style is running. The coil feed then pushes the vents on a motorized conveyor to one of three Fanuc R-2000 iB/165F robots in the cell, which picks up parts one at a time as they are presented and places them on a locating die for the next operation. Here, a second gap-frame press with three dies performs trimming, wiping and nail-hole stamping. Another Fanuc robot tends this operation as the parts move through, providing output to the Cieco press control to determine press cycling. The robot then transfers all four vents with one vent exiting that operation to a locating die for a third straightside horning press that creates a vent hole and gas-line knockout. Tending the third press, another identical Fanuc robot picks the vent from the locating die and transfers it vertically into the press for the knockouts. This robot also outputs signals to a Cieco control for press cycling. Upon part completion in the third press, the robot then places the vent on a motorized conveyor for transport to a palletizing station. This is the only area of the cell with a human presence, for inspection and for manual stacking on a pallet.

With three robots operating in proximity and sharing stations, discrete I/O communication between the robots prevents them from crashing into each other, according to Cole. Two styles of vents run on the line, and a few factors enable quick and simple job changeover.

“The only real difference between the two vents is a slight height variation,” Cole says. “Everything else, including part length and width, is exactly the same save for a more oval vent hole on one, as are the operations. This means minimal tool changeover. The robots require no tooling changeover. It’s mostly just calling up a different program in the robot  controller and everything else is taken care of.” 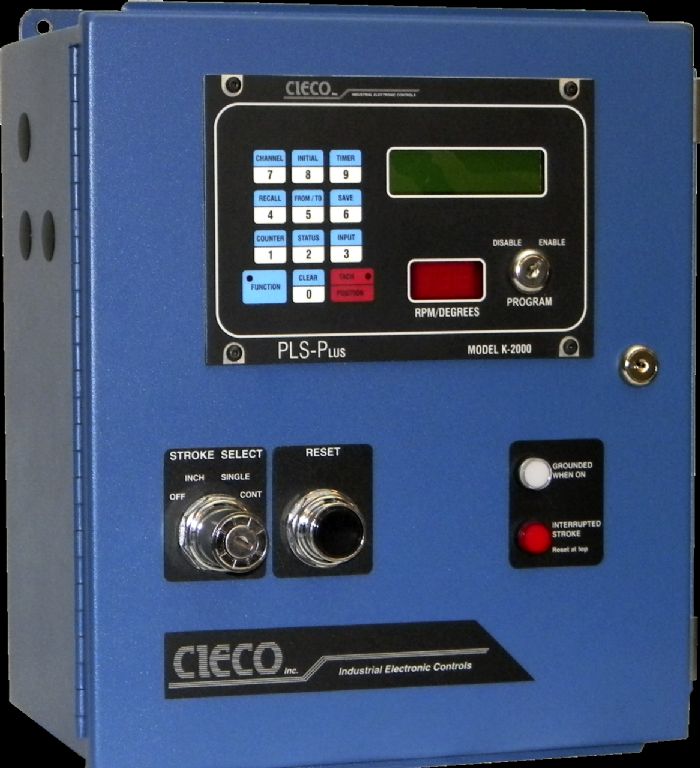 “We bought used presses for this cell, with outdated controls,” Cole says. “We decided on Cieco for control upgrades because of our familiarity with them and their reliability (as experienced with Cieco controls on other USA Pan presses). And, being right down the road from us helps if we need something right away. For this cell, we needed a control mode to accept an external output from the robots in order to control the press cycles. This is accomplished through the Automatic Single Stroke mode on the Cieco controller (used to allow an external device to initiate a single stroke of the press). We monitor this mode in all of the robot programs. Should the mode be interrupted, say, through a die-protection fault—we have die-protection sensors that interface with the Cieco controller to prevent crashes―or a top stop—the robots won't continue on an automatic cycle.”

Given all of the robotic handling required in this cell, die protection brings added advantages.

“The vents have a bit of oil sheen on them, and may slip and not enter the gap press correctly,” Cole says. “This does not happen often, but if it does, the die-protection system will catch it and prevent damage to the die or the robotic tooling.”

The Cieco controllers send other parameters to the robots, according to Cole, including press-revolution degrees, which signal that the press is fully open to allow a robot to enter.

“Overall,” Cole says, “these controllers make interfacing with robots easy and user-friendly. We went from an all-manual system utilizing four employees to a fully automated robotic-press process. The straightforward and user-friendly Cieco press controls were exactly what we needed to interface the robots with the presses. Part quality has improved due to the dies that we designed inhouse and to the precise loading of the dryer vents by the robots. We also gained production of one more dryer vent per min. with this new process.”

While the controls, according to Cole, ease required robot and press communication and monitoring, designing and building a successfully operating press cell is no easy feat. Sequencing the robots, presses and feed line to efficiently produce the vents did prove challenging.

“Ensuring that the robots avoid each other, and controlling the initial forming press to descend via a sensor on the conveyor―all of that proved to be a bit of a hurdle,” Cole says. “So, the biggest learning curve for us was figuring out how to interface everything in what is our biggest press-robot cell.”
The USA Pan team also had to select the right presses to optimize cell production.

“We needed the right press-stroke length because these vents are 3.5 and 4.25 in. deep,” says Cole, “with robot-tooling height of 4 in., and the large sizes of the dies used to produce the vents. So we came across a 200-ton, 20-in.-stroke, double-crank gap-frame mechanical press, with the gap frame needed to allow for robot access.”

Mission accomplished on finding the press, and finding a way to operate and control the new automated cell. MF 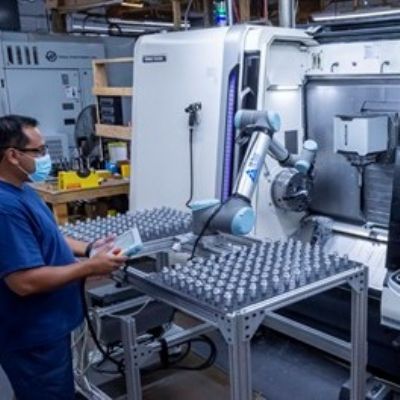