Schuler Inc., Canton, MI, not only offers innovative metalforming systems and technology, but also performs production hydroforming. The firm supplies hydroformed components used in an array of applications, including automotive, heavy truck, ATVs, motorcycles, appliances and office furniture. Part size ranges from tubes 1- to 6-in. dia. with wall thickness from 1.4 to 8 mm.

Initially established as a hydroforming-technology proving ground, the Canton facility has evolved to take on full commercial hydroforming production. It operates a press line comprising a Schuler 500-ton hydraulic preform press and an 8500-ton hydroforming press. The line is tended by five high-payload robots—model KR150 robots from Kuka Robotics Corp., Clinton Township, MI. The robots are particularly well-suited for transfer and load/unload tasks, allowing Schuler to support the design and manufacture of prototypes as well as high-volume production.

Prior to 2005, all of the robots’ end-of-arm tooling used at Schuler for part handling was constructed by outside suppliers. This approach proved costly and still resulted in some reconfiguration and tuning at die tryout, according to Schuler plant manager Craig Zeleji. The firm then decided to try its hand at building end-effector tooling inhouse. It developed a design based on readily available, interchangeable components using standard 2.5-in.-dia. tubular aluminum for the main boom. Extension arms, designed to hold clamps and magnetic grippers, were fabricated from 1-in.-dia. aluminum tube.

Zeleji set out to evaluate the carbon-fiber tooling on a Chrysler production-hydroformed component for an engine cradle, weighing about 20 lb. At the time, the baseline tooling being used in production at Schuler was constructed of aluminum, with a rotation device mounted on the leading edge of the end effector. The tool handled two blanks—it picked and placed one blank for cleaning and lubrication, and placed a second blank, following lubrication, into the die cavity.

Schuler designed the process with a two-cavity die, although the robot could only load one component at a time due to the combined weight of the parts and the end effector. The weight of the tooling limited robot efficiency and made tool changes cumbersome. Further, the weld joint at the end-effector pivot point became susceptible to cracks.

Says Zeleji: “The challenge was to more efficiently manufacture these types of parts, since we were running at below rated press capacity for stroke rate, because the robot could only handle one part at a time.”

Carbon-fiber tooling addressed these problems by providing a lighter, stiffer alternative. Because robot performance depends on the weight (and weight distribution) being cantilevered, the use of carbon-fiber material leads to increased speeds and quicker settling times within the working envelope of the robots, promising throughput gains.

When Zeleji began working with Bilsing, Schuler already had designed the tooling for a complete solution, from the part back to the robot’s wrist. Conforming to standard interchangeable sizes, Bilsing’s carbon fiber was relatively simple to integrate into the end effectors.

Says Zeleji: “Since the carbon fiber is interchangeable with the aluminum, it was used as a direct replacement. This allowed us to immediately begin ramping up for production.”

Use of carbon fiber not only allowed the engineers to manufacture tooling in the same diameters, but it offered significant strength and stiffness advantages over aluminum. To achieve the same strength of carbon fiber, Schuler would have had to double the wall thickness of the aluminum tubing—and still would not realize the high stiffness properties of carbon fiber.

According to Zeleji, “because carbon fiber made the overall tooling so much lighter, we were able to handle additional part weight, achieving a 10- to 15-percent increase in production weight. We also realized a 6-sec. reduction in cycle time, representing an overall productivity gain of 15 percent. And, part consistency and process repeatability improved because the new tooling proves to be more harmonically stable—there is less bounce.”

Further process improvements included increased ergonomics, noted particularly when it comes time to change tools. Says Zeleji: “We don’t have automated tool change capability, so it was important to make it easier for our operators to change tools—yet another benefit of switching to the lighter-weight carbon fiber tools.”

George Douglas, Schuler’s maintenance supervisor and process engineer, adds that “with aluminum, changing one end effector was a two-man job. With carbon fiber, while we still need a second operator to help guide the end effector to its nest, the tools are light enough for one operator to carry. The carbon-fiber tools also prove easier to guide into place because of their increased rigidity, which helps avoid damage to magnets and other parts during changeovers.”

Speaking of damage, Schuler found that its older aluminum tools were prone to bending or breaking in the event of an occasional crash. Not so with carbon-fiber tooling. Says Douglas: “With carbon fiber, in the event of a crash only one piece of the tool breaks, and there are no bending problems. This makes crash recovery much simpler and quicker. And, there’s no dust like there is with aluminum.”

The Transition is Complete

In spite of the misconceptions surrounding carbon fiber, the benefits of developing a lighter, stiffer and more harmonically stable tool was a challenge that Schuler could not afford to overlook. The value proposition of using carbon fiber over aluminum or steel is justified in the design and construction of stamping and body-shop end tooling, particularly in high-speed robotic applications.

Recently, Schuler’s facility has made the transition complete. According to Zeleji, “the entire shop is now fully realizing the benefits of carbon fiber, and there hasn’t been a single instance where we have not been able to use it. There has been no call to develop special tubing profiles—everything has been issued in standard stock. Aside from having to develop some custom bracketry, carbon fiber is working on everything.” MF 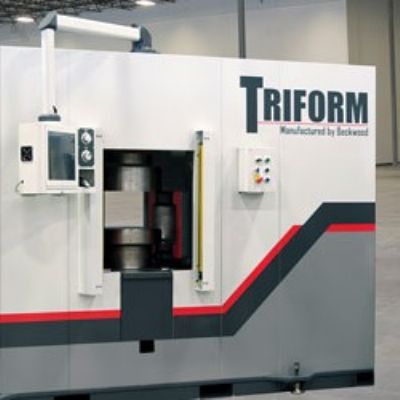