Study Mission to Japan: In Search of the New Age of Quality 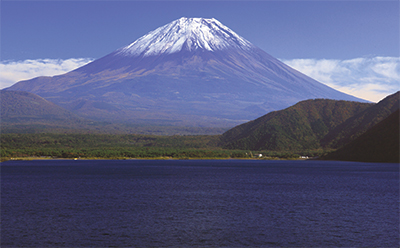 To achieve a rebirth of Japan as a nation of quality requires the establishment of “the spiritual structure that the age requires…to reinforce the traditional Monozukuri abilities…(there’s a need) for self-starting people to lead us in taking risks as the competition around us becomes increasingly intense…(workers) who have their own value standards and welcome new challenges.”

So said Professor Yoshinori Iizuka, from the Graduate School of Engineering at The University of Tokyo in an interview recorded in 2008. This new age of quality, spiritual structure and self-starting mentality throughout Japan’s manufacturing industry became clear when MetalForming magazine joined two other leading industry publications on a whirlwind tour of Japan.

The study mission, held May 13-17, 2013, courtesy of machine-tool builder Amada Co., Ltd., took us to two Amada customers—a small family-owned job-shop fabricator and a large OEM manufacturer. And, we visited Amada’s product showroom and its array of manufacturing operations and development centers. The icing on the cake: An interview with Amada Co. president and CEO Mitsuo Okamoto.

A recent Wall Street Journal op-ed noted that while Japan’s GDP for the first quarter of 2013 showed “surprisingly strong growth,…productivity gains are needed to unleash Japan’s potential after 20 years of stagnation.” Our study mission, if it accomplished nothing else, certainly showcased plenty of tools available for driving sheetmetal-fabricating productivity through the roof—in Japan and around the world.

The anchor for our adventure was the Amada Innovation Fair 2013 Global. This two-month-long mini tradeshow served as the company’s showcase of new machines—13 new machines in all (see sidebar: A Baker’s Dozen of Fabricating-Equipment Innovation). Describing the company’s overall commitment to its customers, Amada managers use broad-brush phrases like “helping fabricators move quickly from print to product…from blank to bend…from programming to production.”

Amada president and CEO Mr. Okamoto emphasized the company’s research and development efforts related in particular to automation, noting that, “In the future, we expect our customers to continue to ask for full automation, as with our new Lasbend AJ (an automated production center that cuts, forms, bends and taps) to help them meet prototype and short-run requirements. We’re developing the total solution for the plant floor—networking, digital manufacturing…how to make the machines intelligent. That’s our R & D objective moving forward.”

In presenting Amada’s mid-term management plan, Mr. Okamoto notes that the goal is to grow the company’s sales from 190 billion yen in 2012 to 300 billion yen by 2015. At the same time, he expects operating margin to grow from 4 to 15 percent, in part due to its continued development of its cellular production system.

We saw the Amada production system (which it calls “booth-stand production”) in action at the Amada Innovation Center in Fujinomiya. The 750,000-sq.-m campus includes a highly automated parts warehouse, a dedicated laser-machine factory, and a plant dedicated to machine-frame welding and coating and turret-disk assembly. The laser-machine factory boasts 70 booth stands over nearly 18,000 sq. m of floor space, with the capacity to assemble 140 machines/month.

Automation took center stage at Amada customer OKI Electric Industry Co., when we toured its Mechatronics Systems plant in Tomioka. OKI manufactures cash-handling machines (ATMs and the like), airport check-in counters, call-center telecom devices and other similar equipment. The plant encompasses 62,500 sq. m and 825 employees, including 190 who work in sheetmetal fabrication. The fab shop processes as much as 20 tons of sheetmetal/day, primarily 1 to 2 mm thick.

Plant general manager and executive officer Yoshiyuki Nakano, with the help of Amada’s translator Yukinaga Nakashima, explained that supplying its assembly lines once had the plant specializing in metal stamping. However, as its business has transitioned to low-volume high-mix metalforming, fabricating processes such as laser cutting, CNC punching and press-brake bending have become core competencies.

“In 1978, we were the first manufacturer in Japan to install a combination laser-cutting and CNC punching machine,” Nakano said, “and now we have eight combination machines.” Included in this inventory is an Amada Acies punch-laser added in 2011 that Nakano says improves throughput on some parts by nearly 300 percent compared to a standard turret press.

“About half of our press-brake bending is automated,” Nakano told us, “and the goal is to be 80-percent automated by 2014.”

Low-volume high-mix production also was on display at the precision sheetmetal job shop of Fukasawa Inc., in Tokyo. Supporting primarily the home electrical-appliance industry (televisions, office-automation equipment and telecommunication equipment, for example), the firm specializes in prototype development and 3D modeling. This in addition to its full-service fabrication offerings, including laser machining, CNC punching, bending and projection welding. The company categorizes required operator skills into 23 fields, each field with seven grades. Each operator wears a name tag that includes his skill fields and grades.

Our tour started with company president Masao Kurihara’s eloquent explanation of the values not only of the company’s capital equipment but of its knowledgeable and dedicated workforce. The 43-employee 800-million-yen (US$8.3 million) company is focused, Kurihara says, on transforming its vast bank of “tacit knowledge,” often difficult to pass on to others, into “explicit knowledge.”

This challenge, I’m sure, rings true to metalformers around the world. That is: the day to day routines (referred to as “tacit knowledge”) practiced by our most experienced machine operators, like riding a bike or playing the piano, are not easily taught to newer employees entering the metalforming arena. Conversely, “explicit knowledge”—technical and more academic-based—can more easily be taught and passed along. So the challenge, as Mr. Kurihara explained, is translating and breaking down the tacit knowledge shared by Fukasawa’s more experienced employees into more digestible and teachable bits of explicit knowledge.

Along those lines, our group was privy to a series of standardized worksheets the company has developed. These worksheets capture, step by step, several of the processes the company uses to document its processes, such as quality control and equipment preventive maintenance. Then we toured the 2800-sq.-m factory, starting with a look at CNC programming. Here we learned of the firm’s use of concurrent engineering to quickly move prototype work through to production. A team of four programmers feeds press brakes and turret-punch and laser cutting machines with as many as 40 new programs per day.

In the plant we spied an array of Amada equipment, including an EM 255NT punching machine flanked by a seven-shelf Ama Space 748 material-storage tower and a Togu III tool grinder. Sheetmetal bending occurs via six manual press brakes, 20 to 80 ton capacity, and an Amada Astro II 100 NT HDS 1030 robotic-bending cell. Fukasawa runs the robotic-bending cell, on its floor since 2008, lights-out (without operator supervision) 70 percent of the time, we were told. Part volumes through the cell average 100 to 800 per setup, and the plant averages 10 setups/day.

Machines aside, it’s the skills and attitude of his workforce on which Mr. Kurihara maintains his focus. “We want our employees, when they leave work at the end of each day, to work on developing their character, through a variety of enriching cultural experiences. They then must bring that personal growth and experience back to our company and use it to make us a stronger supplier to our customers.” 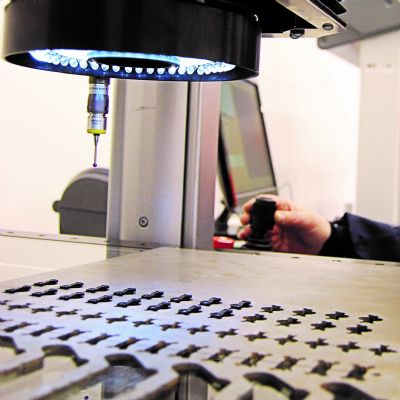 
Andon? There's an App for That