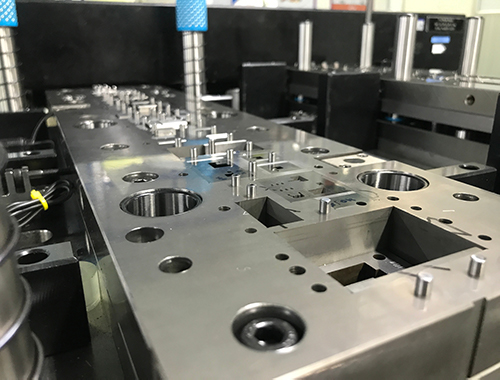 With the age of Industry 4.0 upon us, information is king, and those who not only gather but correctly and quickly assimilate and act on that data hold a royal flush. A walk around FABTECH last November in Chicago provided a glimpse into the impact of data on manufacturing, and on metal forming and fabricating in particular.

The technology explosion offers tremendous potential to monitor and control actions within the press bed, where press, tooling and part material all meet. More and more operations occur in the tooling, and in the press, as die and part designs advance along with press and press-control capabilities. Throw in ever-stronger and difficult-to-form workpiece materials, and the press bed becomes an extraordinarily busy and sophisticated location. Tracking and acting on all of these in-press items and actions demand effective, precise and robust monitoring and control capabilities.

As an example, at FABTECH Marposs demonstrated for MetalForming the Brankamp X series of real-time process monitoring technologies for metal forming and stamping operations. The units immediately identify manufacturing faults as well as part or tool variations, with stated benefits including optimized machine efficiency, improved part quality, and the potential to limit unplanned downtime and tooling costs.

The trend toward lightweight construction and increased part complexity can result in higher deformation levels. Process-integrated monitoring provides a method to detect a range of quality defects such as cracks in components, strip marks, broken tool elements, or turned or mis-introduced parts, thus bringing the possibility of 100-percent workpiece quality control.

Recognizing the trend, and the benefits of such monitoring technology, high-speed-press builder Bruderer Machinery Inc. began working with Marposs in 2013 to incorporate Brankamp in-press systems for its stamping customers.

“What’s critical to monitor and control: coining, tonnage, vibration?” asks Sean Tucker, chief engineer with Bruderer. “Stout parts require a fair amount of change in the process for them to move out of spec. Other parts, coined or with critical angles, are susceptible to changes in die condition and sharpness, temperature, the amount of oil, or material thickness. There are many variables to control, which makes improved process monitoring an excellent tool.”

Depending on the application, sensors placed either on the machine, in the tooling or in the dies connect the press to a Brankamp X-series unit, enabling users to assess in real time process performance via an HMI.

Force sensors, placed in specific positions, monitor tool and machine performance related to the forces applied, according to Marposs officials. From these sensors, the systems learn the normal limits of the process. The control unit then observes the signals of each cycle and compares it with the stored limit curve. Sensing the movement of a signal outside of the envelope curve, the formed part is sorted out or the machine is stopped.

Throughout the process, the control panel shows force measurements and identifies the wheres and whats of parameters that are approaching or surpassing range limits.

“In simple terms, it’s like the picture game from when you were a kid,” Tucker says. “You have two pictures and have to find the differences between them. The X-series handles all sensor monitoring with output to our presses. Should stoppage result, operators can evaluate the problem within the system.”

“Bruderer has machines that run 2300 strokes/min.,” Tucker says. “An out-of-spec condition may result in thousands of bad parts before a quality-control check identifies a problem. A press working at 23 strokes/sec. to produce two-off parts takes perhaps 130 milliseconds to stop. That means six bad parts. Compare that to an operation where parts are checked every few minutes at the minimum. Bad parts can add up very quickly when operating at these high press speeds.”

For typical high-speed applications such as small electrical or connector parts, “standard die protection features can perform double-thickness and misfeed detection,” Tucker says, “but won’t detect a coin that’s out of tolerance or an incorrect angle. Sensitive monitoring can do that. For example, one stamping customer of ours placed a small piece of paper on the material strip going into the tooling and the monitoring system caught it at the first station and stopped the press.”

To this point, the discussion has revolved around detection of a bad process or a bad part. What’s the next logical step? Ideal is the ability to monitor the process and then make adjustments prior to making bad parts.

Servo feeds now dynamically compensate to ensure a match to forming speeds, so that’s not really an issue, according to Tucker. But monitoring the forces created during stamping provides real opportunities to adjust on the fly. Sensing and process monitoring capability, such as that available with the Brankamp X series, enables sensors to measure precise stamping forces. Sensors placed on press columns can measure the full tonnage, but acting on that information results in a coarse adjustment, according to Tucker. Sensors mounted on the die right next to a punch or a forming tool responsible for coining, however, provides much-improved and precise tonnage monitoring and control.

“The user can improve tonnage-monitoring resolution and then be more specific in controlling and adjusting based on the feedback from the process control system,” says Tucker. “The operator can set a window to maintain a range of correct tonnage to produce good parts. Should tonnage approach range limits, the press control, when integrated with a system such as the X series, can adjust the ram shut height as the press runs to increase or decrease the tonnage and bring it back into range. The system essentially allows a metal former to zoom in on specific areas of the die to monitor and control.”

X-series systems offer various analysis functions as well as different counters and storage media to ensure repeatability of various processes. The X3, representing the majority of systems employed in Bruderer’s presses, provides this type of monitoring, along with eight channels for sensor signals and four others as zoom channels for detailed monitoring of specific, sensitive process areas. X5 and X7 models offer additional capabilities.

By sensing force on the stripper plate, the X-series system can pick up minute changes, important for slug detection in production of small connectors or electrical parts.

“The sensoring immediately will pick up any bending of the stripper plate,” explains Joe Bortolameolli, product specialist at Brankamp.

“Normally, plate pressure will experience no force changes unless there is a defect, such as a slug. We’ve picked up defects as small as a plastic wrapper on the metal strip passing through. Such detection prevents the defect from passing through and ruining parts and tools. This monitoring tells the real story of what's going on in the tooling—what a metal former really can't see with an overall tonnage or overall distance sensor. It's important to have an eye in the tool.”

The X-series process monitoring setup also encompasses acoustic sensors that pick up on the snapping of punches in tooling, and immediately shuts down the press.

“If the punch snaps,” explains Bortolameolli, “it creates a different frequency range than the normal forming force. Usually, as tooling recedes, the punch will snap and break. That can’t be monitored with distance sensors.”

“A stamping customer recently experienced shutdowns after every 10 press strokes,” says Bortolameolli, providing an example of such capabilities. “We found no slugs, but the sensors picked up a definite change in force on the stripper plate. Upon further examination, we found a clogged oil-mist mechanism. Instead of regular misting, every 10 strokes it would release a blob of oil onto the strip, resulting in a force increase and an indent in the thin material. It was a unique problem that wouldn’t be caught with other types of sensing.” MF 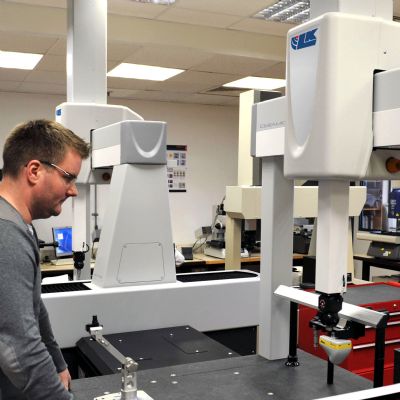 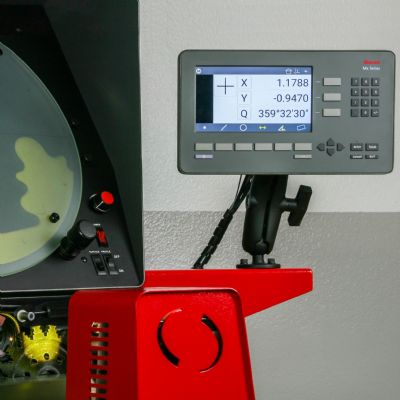 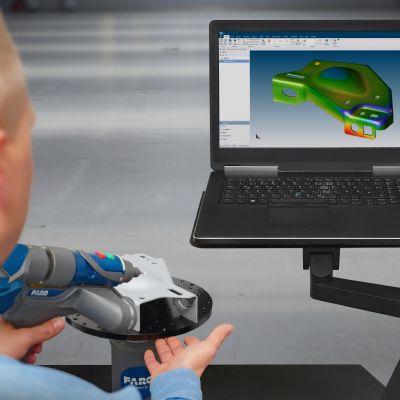