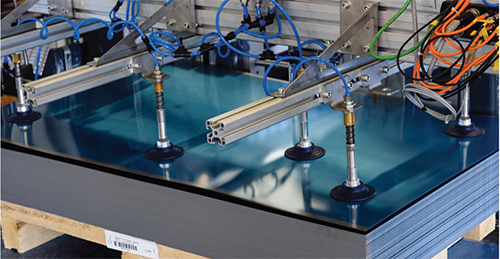 Featuring rapid cycle times of 30 to 45 sec., the Foilpuller employs Fipa (Cary, NC) flat vacuum cups and compact ejectors to apply suction to single pieces of sheetmetal in a designated stack at the pick-up site. The vacuum cups prevent wobbling, while a vacuum shuttle delivers the sheet to a worktable where a cutting wheel lightly scores the protective film on the surface of the sheet. Through precisely controlled cutting, the wheel only makes incisions where film must be removed to allow for mounting fittings, hinges, cutouts and welding work, leaving the rest of the protective film intact. A scraper then removes the scored film to reveal a residue-free surface before the Fipa gripper system places the sheet in a second designated stack for further processing.