Roller-coaster Iowa weather brings temperature extremes that test any building’s quest for interior comfort, let alone a manufacturing plant’s. Priding itself as a company that strives to serve the needs of its employees as well as customers, the management team at New Hampton Metal Fab took particular notice of the environment after recent completion of an 8500-sq.-ft. warehouse addition. No one expected the new space, with its 40-ft.-high ceiling, to be so uncomfortable.

With winter temperatures averaging only 25 to 27 F and heat rising to the rafters, the New Hampton facility typically experienced a 20 F temperature difference between the floor and ceiling of the warehouse. Summer months were just as grueling, in part due to heat generated from the facility’s plasma burn table and welding station. With little or no insulation in the building, New Hampton Metal employees were at the mercy of the weather outside.

“All of the heat was going up,” says Pete Gallup, purchasing manager, who was looking to save on heating bills and to balance out temperatures during colder months, while providing a cooling effect during New Hampton’s hot summers. “We’d send somebody up to fix something and they would strip down to their long johns, while the guys on the floor were standing there in Carhartts, basically freezing to death.” Employees wearing so much flammable clothing, a safety issue, was an added concern.

The answer: a large-span ceiling-mounted fan.

Gallup decided to install an 18-ft.-dia. Powerfoil X fan from Big Ass Fans. The goal: Circulate the trapped heat at the ceiling down to the occupant level without a chilly draft, creating uniform temperatures within the facility, and, therefore, a more comfortable year-round environment for employees.

Why does this fan technology work? Large ceiling-mounted fans—Big Ass Fans’ largest models offer wingspans to 24 ft.—provide significant air circulation, moving air throughout an entire space, from ceiling to floor and wall to wall. As heat rises, fans circulate it throughout the space to warm areas that traditional heating systems often miss, such as corners and lower-height areas. In the summer time, that same air movement provides cooling. While air movement does not lower the actual temperature, it creates a cooling effect as the breeze passes over skin, making occupants feel a temperature drop of as much as 10 F—similar to the effect of a breeze rolling in while outside on a hot day.

Air circulated by fans moves over and around obstructions such as machinery and stacked product. This airflow pattern ensures that air reaches all corners of the building, maintaining consistent conditions throughout, and eliminating condensation and stagnant areas where product integrity is a concern.

Employing this fan technology pays off in numerous ways. Americans spend as much as 70 percent of summer electricity bills on air conditioning, according to the U.S. Department of Energy, and in the commercial sector, space cooling accounts for 10 to 25 percent of energy use.

Generating cooling from an energy-efficient fan allows a user to raise the thermostat setpoint a few degrees and stay just as comfortable. Every degree raised on the thermostat brings savings of 3 to 6 percent on cooling costs. Additionally, fans mix the air to create complete temperature uniformity, allowing a thermostat to read the actual temperature in the space, not just the temperature by the thermostat. In addition, no temperature is ideal for everyone, which requires facility managers to set strict rules about thermostat adjustment, or lock out the thermostat altogether. Conversely, employees can adjust fan speed without creating a huge energy suck.

More comfortable environments via fan usage also pay off in productivity. Studies show that productivity begins to decrease by about 1 percent for every degree that the temperature rises above 77 F. The cooling airflow from fans prevents fatigue and reduces the need for breaks. With comfortable workplace conditions, managers can keep employees satisfied and turnover low. Overhead fans such as those offered by Big Ass Fans also eliminate the need for box and pedestal fans that interfere with productivity and create tripping hazards. Replacing box and pedestal fans also brings energy savings.

New Hampton Metal Fab reaped all of the above-mentioned benefits via the Big Ass Fans addition. With heat rising to the warehouse’s 40-ft. ceiling, cold air filled in the corners, where few employees wanted to work. With the new fan, the ceiling-to-floor temperature differential dropped to less than 1 F.

“Nobody would work back in those corners,” says Gallup. “But now, anybody can work pretty much anywhere. The fan has made the temperature uniform through the entire height of the warehouse.”

And, comfort from the fan addition extended to New Hampton Metal Fab’s bottom line. According to Gallup, the company saves 33 to 38 percent on heating bills during winter and he reasons that the fan installation will pay for itself within five years.

“It’s not too tough to convince anybody that these fans are a good idea,” he says.

Relief is not confined to the winter months. New Hampton Metal Fab runs the Powerfoil X all summer long, and “the crew on the line really appreciates the air movement,” Gallup says.

The energy-efficient fan from Big Ass Fans has replaced numerous inefficient pedestal fans to create steady, continuous airflow that keep occupants cool, according to Gallup, noting that the air circulation rids the facility of stagnant air and provides employees with a more comfortable work environment during the warm spring and hot summer months. MF 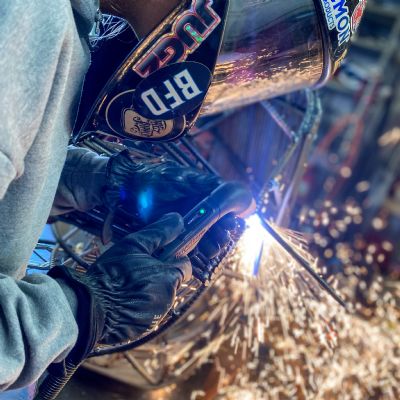 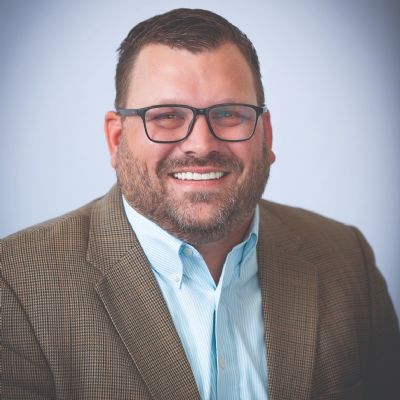