This article continues our discussion from Material-Flow Analysis in Cup Drawing, Part 1, which appeared in the January/February issue of MetalForming.

The principal characteristic of all deep drawing processes: indirect application of force. The force required to cause deformation is not applied directly to the deformation zone (flange area). Instead, a punch force acting on the blank causes the material to bend over the punch radius, where it reduces in thickness due to plane-strain bending. The stress at the bottom of the cup begins to transfer toward the cup diameter, creating the cup bottom. The force subsequently transmits from the cup bottom to the cup walls, then to the deformation zone (Fig. 1). 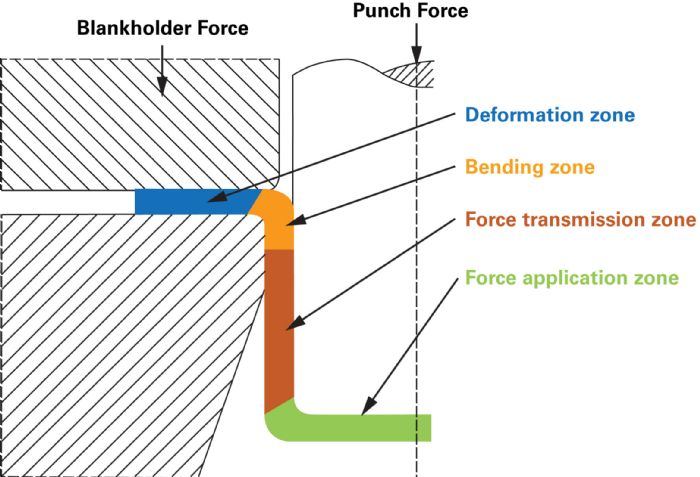 We can divide the deep drawing process into six basic elements to better understand the mechanics.

Bending represents the first element in deep drawing. As the punch contacts the blank, material concurrently bends around the punch radius and over the die-entry radius. The material in contact with the punch face moves downward to form the bottom of the cup. As the punch moves downward into the cavity, additional sheet metal from the blank bends over the die-entry radius.
At this stage of drawing, only simple bending has occurred. The cup bottom could have been formed in a solid forming die, but doing so limits the depth of forming due to fracturing of the material. Greater depth can only be achieved by pulling—or drawing—the sheet from the outer regions of the blank.

As the process continues, additional material from the blank bends and straightens to create a deeper wall. At the same time, the process pulls the blank edge closer toward the punch.

For the blank edge to move, the force of friction must be overcome. Many areas in the die contact the sheet metal blank during the drawing process. The amount of friction generated depends on many factors, including the blank area in contact with the die face, roughness of the blank and die surfaces, lubrication and the blankholder force acting on the sheet.

Initially, the static friction between the blank surface and the die face must be overcome.

Because draw dies usually feature a blankholder or pressure pad surrounding the punch, friction also occurs between the blankholder and the opposite side of the blank. The normal force created by the blankholder adds significantly to the force of static friction. However, the blankholder pressure must not be too great, as this prevents blank movement. Conversely, inadequate force causes the blank to buckle or wrinkle.

As the static force of friction is overcome, blank movement begins. At this stage, overcoming dynamic (sliding) friction becomes a lesser concern. Reducing and controlling frictional forces usually requires controlling the surface topography of the die surface and sheet metal, and the use of lubricant or drawing compounds. 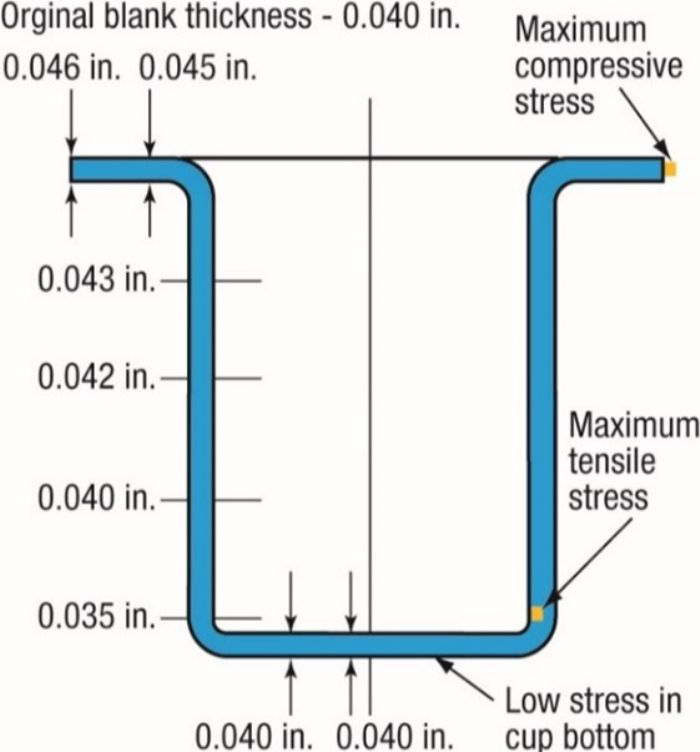 As the blank edge moves inward, it must reduce to a smaller circumference or perimeter. In the free state, the outer edge of the blank would reduce in length by buckling. Employing a blankholder to apply a holddown force forces the flange to thicken rather than buckle. A cross-section reveals a distinctive pattern of thickening and thinning found in flat-bottom cup drawing (Fig. 2).
Blank material located near the die radius at the start of the draw would experience little compression. The material located farther away undergoes more-significant compression, possibly causing it to move inward and flow over the die radius. This accounts for the variations in vertical wall thickness and the need for increased punch-to-die clearance in deep drawing.
Compressive loads cease after the sheet metal flows over the die radius.

Material in the cup wall, subject to tensile stress, deforms via plane-strain stretching, which results in sheet thinning near the radius. Maximum wall thickening occurs near the die-entry radius and diminishes as it approaches the die-impact, or shock, line. Thinning occurs below the die-impact line, with maximum tensile stress present near the punch-nose radius. A small punch-nose radius concentrates maximum tensile stress near the cup bottom where little or no deformation has occurred, increasing the likelihood of fracturing.

Failure near the cup bottom can relate to the ultimate tensile strength (UTS) of the material, the diameter of the blank (Db) and material thickness (t). Thus, the maximum punch load (Pmax) to fracture the cup bottom can be found using the following equation:

In practice, the actual drawing load and Pmax may measure very closely in magnitude. Deeper draws become possible when the punch-nose radius is larger because the site of maximum tensile stress moves further up the cup wall where the material has been strengthened by cold working.

A desired shape of the cup bottom other than flat requires stretch forming. The most common shape: a spherical dome.
At the beginning of the draw, blankholder forces must be high enough to prevent flange movement as the punch forms the spherical cup bottom by stretching the sheet metal over the face of the punch. The greatest amount of thinning and potential for splitting occurs in this portion of the cup. In addition, the higher blankholder force limits the depth of draw for this type of cup. The stretch forming process should be nearly complete before blank movement initiates. MF 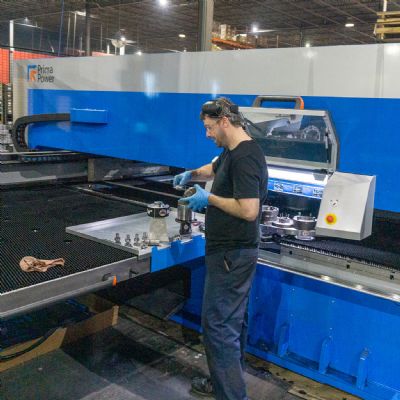