Tools used in blanking, punching and trimming operations consist of a punch and die. The terms “punch” and “die” often are misinterpreted, primarily because they have double meanings.

For example, a complete stamping tool often is referred to as a “die,” and the individual that built it, a “die-maker.” The die is comprised of two main halves: the upper die, often referred to as the punch; and the lower die, often referred to as the die. This is pretty clear until you consider that “punch” may also refer to one or more male forming or piercing components, which may be mounted to either the upper punch shoe or the lower die shoe. Now when the die gets mounted to the punch and the punch is mounted to the die it can become very confusing.

Another source of confusion is the terminology we use for cutting operations. What is the difference between piercing and punching, trimming and parting, or slitting and shearing? Does any clear definition exist?

Definitions for these various cutting operations are compiled here from a number of sources, but mainly: Modern Industrial Die Design by E.A. Nowolinski (1947), Techniques of Pressworking Sheet Metal, D.F. Eary and E.A. Reed (1974), Automotive Sheet Metal Stamping and Formability (AISI Report AU-89) by S.P. Keeler (1989) and Advanced High Strength Steel Guidelines, AISI Committee on Automotive Applications (2003). Why these materials? All of them can be considered significant works of their time and they use cutting terminology consistently in the following manner:

Shearing is performed by a cutting blade acting upon a workpiece placed between a stationary lower cutting blade and a movable upper blade. To be classified as a shearing operation, the cutting action must be along a straight line.

Slitting is the cutting of lengths of sheetmetal into narrower lengths by use of one or more pairs of circular knives. Spacers on the slitter arbors maintain the proper blade location for the desired width. The cutting up of a wide coil (master coil) into two or more narrower coils is called slitting.

Blanking involves cutting actions to produce a complete or enclosed shape. The blank is the piece retained for further processing. The shape may be composed of any combination of straight and curved line segments. Developed or contoured blanks used in drawing and forming operations oftentimes are generated by blanking operations. In blanking operations, offal or skeleton webs are produced. These materials often are cut up into smaller pieces and discarded as scrap.


Perforating (Punching) is generally used to describe all die-cut holes, regardless of their size or shape. In Techniques in Pressworking Sheet Metal, Eary and Reed differentiate between punching and piercing by emphasizing the fact that a slug is produced in punching operations but not in piercing work.

Piercing often is used interchangeably with punching and perforating operations. However, piercing operations are frequently (but not als) defined as “forming a hole in sheetmetal with a pointed punch with no metal fallout (slug).” The illustration depicts a piercing operation fitting this description.

Lancing makes an opening without completely separating the cut piece from the body of the metal sheet, such as for louvers. Lancing frequently is combined with bending to form tabs. No slug or scrap is produced in lancing operations.

Trimming removes unwanted material from the finished part that was required for some previous stamping operation such as drawing or stretch forming. Trimming is frequently performed on the earing zone on the top of a deep-drawn cup in order to produce a round flange. Trimming operations produce discarded offal or scrap.

Parting operations are used to separate two stampings that were formed together (usually to make two parts at one time or to balance the draw operation of a nonsymmetrical part). Parting also is an operation that involves two cutoff operations to produce contoured blanks from strip. Scrap is produced in the parting operation.

Shaving is performed on a cut edge to square it up. In general practice, five percent of the thickness of the blank is allowed for shaving.

Fineblanking is a specialized process often employed if the blank edge has an important function to perform or when square edges and no die-roll are prescribed.

These definitions should provide some clarity with regard to cutting operations. Now, if we could only clarify why a die is sometimes mounted to a punch! MF 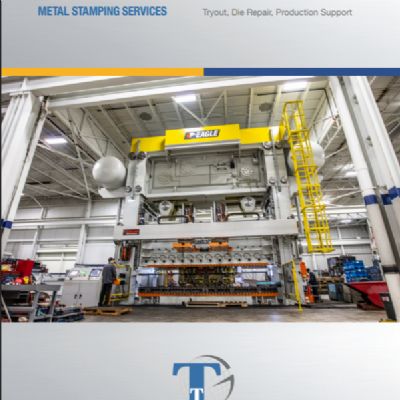