The Battle Between Tension and Compression

For centuries metalforming and other manufacturing processes have fought the battle against internal stresses created by the laws of nature:

1) All matter attempts to move to its lowest-energy state.

2) All stampings will take whatever shape is possible to reduce residual stresses.

3) Achieving an energy state (part configuration) higher than the lowest state requires the addition of external energy to the system.

4) Nothing comes free—Mother Nature exacts a price for extra benefits.

For a demonstration of these laws and stresses, consider a deep-drawn cup (Fig. 1). During forming, the blank compresses in the circumferential direction as it moves toward the die radius. With the formed cup still in the die, its entire wall remains under compressive stress. Then, as the cup is removed from the die, the compressive stresses in the top half release and cup diameter increases. Plastic strain in the cup walls limits the amount of movement, and also restricts the opening of the cup diameter in the bottom half of the wall.

To prove-out these stress patterns, cups were formed from brass blanks. After removal from the die, the cup was filled with liquid to cause vertical grain-boundary cracks due to residual stresses. As the cracks formed, the vertical strips bent outward like a bunch of flowers. To prove that this curling-out resulted from residual stresses, another batch of cups was stress-annealed after being removed from the die. After adding the same liquid, the cracks again formed but did not move out of position.

Unfortunately, the battle rarely ends quickly. Any stamping or other object with internal residual stresses can and will change shape whenever these stresses are modified. Sample modifications include:

• Punching or laser-cutting of holes or cutouts

• Welding brackets or other components to the part

• Partial heattreating of the stamped part

• Dropping the part on the floor.

As an opposite example, consider bending a part over a radius—this causes compressive and tensile stresses to join forces to create a large, unwanted sidewall curl (Fig. 2). The outer fibers face positive (tensile) stress from the radius bend, attempting to pull the outer wall of the sheet outward to relieve the stresses. At the same time, the inside fibers are in compression from the radius bend and attempt to push the inner wall outward. The stress-strain curve shows the A side with highly positive stresses and the B side with highly negative stresses. Note the very large stress differential between the tensile and compressive stress states; this drives the tendency to create sidewall curl.

To reduce or eliminate sidewall curl, stampers can add a post-stretch procedure to the forming process. Here the die adds a uniform tensile stress to the end of the side wall, usually with movable lock beads that lock the blank movement shortly before completion of the cup draw. A 2-percent stretch typically does the job. The tensile stress created along the wall adds a small amount of plastic strain (A1 to A2 in Fig. 3). However, the negative side is erased as B1 moves up to B2 in the positive plastic range. Note the greatly reduced Ds that creates a small shortening of the cup wall and only minimal sidewall curl. MF 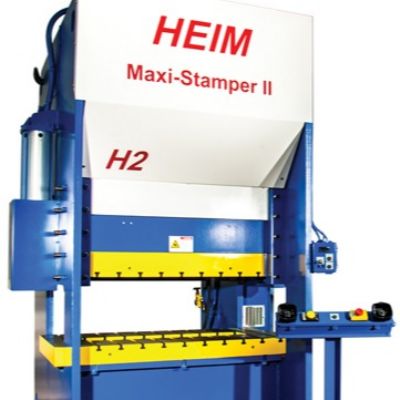 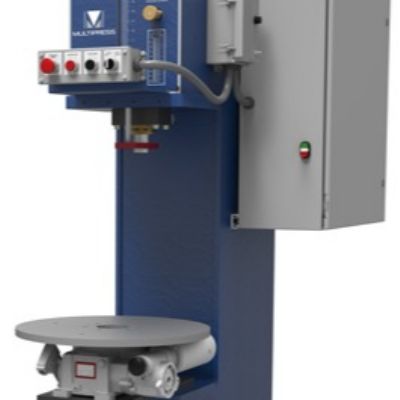