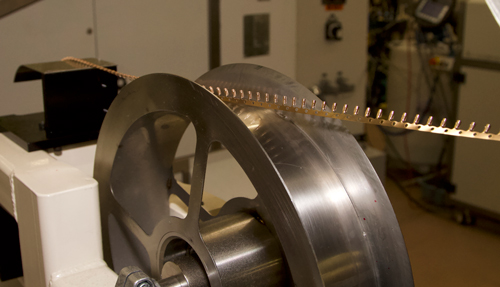 When engineers at Weiss-Aug Co., an East Hanover, NJ-based stamper, began noticing in 2015 that stamping dies, running in their 30-plus-year-old stamping presses, were showing their age, they knew something had to be done. The question: What?

With millions of parts produced weekly and with customers regularly demanding zero-PPM defects, Weiss-Aug management had to decide between refurbishing the existing machines or investing in new machinery at a premium cost of about 30 percent.

After a good bit of back-and-forth, Dieter Weissenrieder, owner and founder of Weiss-Aug, decided to bet big on nine new Bruderer BSTA 200 presses. The machines stamp rates to 2000 strokes/min., ideal for the high-volume, intricate stampings—think connectors for electronics—that Weiss-Aug provides its customers in the automotive, medical, interconnect, defense and aerospace industries.

“This is not a machine used to stamp boat anchors,” says Weissenrieder. “These state-of-the-art machines are perfect for the sophisticated products that we produce, and the favored high-speed punch presses for our type of industry.”

The decision between new and refurbished warranted careful consideration because many of the older machines, while they had accumulated 80,000-90,000 production hours, hummed along at high speeds, though not at the level of consistency required to meet quality standards.

Weiss-Aug chose new machinery over refurbished because making that jump enabled an increase in production output due to improved die life, while allowing the company to incorporate technological advances offered by Bruderer.

“At the end of the day, these presses were old,” says Jeff Cole, vice president of operations, who Weissenrieder says lobbied the hardest for the new presses. “We were seeing premature tooling wear, and inconsistency in part geometry. We realized that it was time to change. It did not make economic sense to rebuild the nine 22-ton machines. Bruderer had incorporated significant technological advances in these new machines, and now that these machines are in production, the improvements in output and part consistency are astonishing.”

Alois J. Rupp, president of Bruderer Machinery Inc., says that even though accuracy can be maintained on rebuilt presses, the older machines can’t accommodate the new features that set newer technology apart. For that reason and others, the reconditioned machines did not make sense for Weiss-Aug.

“In some cases, rebuilding machines for certain products makes sense; this wasn’t one of those cases,” Rupp says, explaining that Weiss-Aug’s stamped parts are small and complex, and rarely flat. Coined, formed and bent multiple times, tolerances are as tight as ±0.0005 in. while part quantities number in the millions. Materials used include stainless steel, beryllium copper, beryllium, phosphor bronze, nickel and other alloys.

“When we began running the same dies, making the same parts in the new presses, we couldn’t believe the improved consistency within production runs,” Cole states. “Not only were we able to increase press speeds, but most of all the new machines reduced die maintenance. Dies also had to be adjusted less frequently, reducing downtime. In summary, productivity rose significantly.”

Rupp notes a press feature that he says ensures consistency: the mass counterbalance system distributes the press’ forces more evenly throughout the machine, thereby maintaining its stability at high speeds.

Initially, Bruderer delivered presses to Weiss-Aug with mechanical feed systems. However, Weiss-Aug quickly determined that it wanted the BSTA 200s with servos.

“Set up time is almost 50-percent faster,” Cole says. “The setup of a servo feed is very much automatic and foolproof. The parameters—stroke, pitch and pilot release—all of which were set manually on a mechanical press, now are keyed in at the initial setup and retained in the press library. Not only does this cut setup time, it guarantees consistent setups by eliminating personal preferences.

“My plan is to continue to upgrade to new technology as we move forward,” Cole continues. When asked what excites him most about the new equipment, he answers, “The challenge of achieving tight tolerances and making the parts that no one else wants to make. It’s very satisfying watching those parts come off of the press and thinking of all the brainpower that went into figuring that out the tooling and making it all work.” MF