Eddy-current and variable-frequency drives (VFDs) have been employed to provide variable-speed control for presses for many years. Mechanical presses, which use flywheels to store energy, are segregated by several standards; here we’ll focus on speed, rating, flywheel energy and main motor requirements.

When discussing ratings, we say “this press is rated at ½ in. off bottom stroke,” which means that the press is designed to perform work at its full rated tonnage from ½ in. before bottom through bottom dead center (BDC).

Flywheel energy is based on the rating of the press, and the size of the main motor relates to the amount of energy that must be put back into the flywheel and the amount of time during which that energy must be replaced.


The flywheel provides energy during the working part of the press stroke. When performing work, its speed of rotation is reduced with a subsequent loss of energy. The motor must restore this lost energy to the flywheel.

The pressure or force required to perform the operation, and the distance through which this force must be exerted impact the energy requirement of the flywheel. For example, consider an ironing operation that requires 40 tons of press force over a distance of 18 in. The required flywheel energy is 40 x 18, or 720 in.-tons. A shallow draw operation might require an average pressure of 500 tons thru 2 in. of press stroke; required flywheel energy would be 1000 in.-tons.

Power Required to Accelerate the Flywheel to Operational Speed

If the press operates at 30 strokes/min., or 360 RPM at the flywheel, a 15-percent slowdown occurs and estimated flywheel inertia is 10,800 lb-ft.2 The energy is:

The motor/drive system must restore the lost energy from the flywheel within the nonworking portion of the press cycle. The figure illustrates a press with a 12-in. stroke (two times the crank radius); it would be 0.5 in. above BDC with the crank 25 deg. above BDC. Dividing 360 into 25 provides a 7-percent work period. 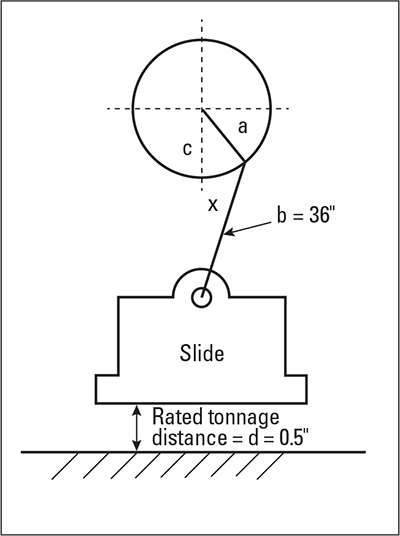 To calculate the required energy to accelerate the flywheel:

f = The cycle frequency or strokes/min. of the press (30 in this example).

This represents the demanded horsepower over the 7-percent working period of the press. Since eddy-current drives provide 250-percent intermittent overload capacity, the mechanical unit would be sized to:

A VFD and/or DC drive typically can provide only 150-percent overload, so drive size would be:

Heat and Longevity of AC Motors

At full speed and load, an AC motor will slip by an amount roughly equal to 3 percent of its synchronous speed, depending on the motor design. This slip represents energy loss in the rotor and converts directly to heat inside the motor, which must be dissipated. This makes AC motors relatively limited in terms of full-torque thermal speed range. A standard induction motor cannot produce full torque over more than a two-to-one speed range without overheating, if subjected to continuous duty. Even with substantial modification, the motor cannot run continuously at full torque at very low speeds due to the thermal losses in the rotor caused by slip.

Special inverter duty motors are subject to serious longevity concerns when subjected to continuous full-torque demands. Heat is the enemy of the VFD when used in a variable-speed press application.

However, in eddy-current drive applications, the AC motor runs at near synchronous speed, optimizing life expectancy due to the inherent heat-dissipating design capabilities of the motor. Eddy-current drives typically run well in excess of 20 years before requiring major attention, compared to the 7-10 yr. average life expectancy of a VFD.

Many stampers run their presses in progressive and transfer applications, loading the press and not stopping it until production is complete. This continuous mode of operation demands that the press drive run under high load conditions at all times; such demand on the press drive is augmented by the energy that must be restored to the flywheel in slower-speed operation when the flywheel-energy demands may already be compromised by the work being done in the press. That’s where eddy-current drives find a home.

Eddy-current drive controls are simple, inexpensive, easy to maintain and readily available in time-proven successful design configurations. It is common for analog controls to run for 30 to 40 years before they require service. Their availability and cost effectiveness makes them highly desirable when compared to typical VFD controls. MF 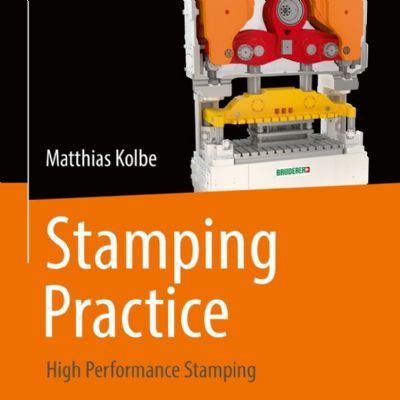