The elongation value measured in a tensile test is defined as the percent increase in length relative to a reference gauge length. An ASTM tensile bar, shaped like a dog bone, features a gauge length of 2 in. Most parts have a more complex shape than a tensile bar and, before a part necks and fails, deformation typically concentrates in a much smaller region than a 2-in. span. These are two reasons why a tensile test is not the best tool to assess sheet metal formability of stamped parts. Dr. Stuart Keeler, the founding author of the Science of Forming articles in this magazine, created and publicized a plant-floor technique to determine forming strains on stampings—critical to understanding formability.

The dog-bone shape of the tensile bar increases the chances that failure will occur in the reduced section over which elongation is determined. For stamped parts, mapping locations on the flat blank to high strain locations on the formed part proves difficult. This makes it difficult to know where to place the reference marks on the blank to designate the gauge length, which has led to covering the entire sheet metal blank with a repeating grid pattern. The grid shape must allow strains to be measured in whatever direction metal flow occurs. Starting with a circle grid makes this easier. The size of the grid pattern must be such that it can capture the relatively small deformation zone, yet be large enough to be measured accurately with simple and repeatable techniques. Using circles with starting diameters of 0.100 or 0.200 in. fit this balance. These combined challenges and constraints led to the creation of circle grid strain analysis, also called circle grid analysis and abbreviated as CGSA/CGA.

To start your strain analysis, etch a repeating circle grid pattern into the sheet metal surface. The most common method: an electrochemical etch, with laser etching increasing as laser installations increase. Painting a grid pattern, though sometimes employed, is messier and the pattern might be scraped off during the forming operation. The grid pattern diameter of 0.200 in. is easier to measure accurately than 0.100 in., which magnifies small errors. However, you can analyze smaller features with a 0.100-in. grid. This initial diameter is denoted as Li (Fig. 1).

Next, the length of the major strain axis and the minor strain axis are measured, with these lengths after forming denoted as LMa and Lmi, respectively (Fig. 2). The percent change in length, relative to the starting diameter, represents the engineering strain in that direction, denoted as eMa and emi:

Rather than using a ruler with sufficiently fine gradations to measure each ellipse and then performing the strain calculations, an easier method involves using a clear strip with markings calibrated for the expansion from the starting circle diameter (Fig. 3). The transparent strip is placed over the formed part and lined up at the outer perimeter of the ellipse in the major strain axis. The major strain in percent reads directly as where the strip markings intersect the ellipse circumference. Then, rotating the strip 90 deg. allows for determination of the minor strain.

Many employers of this analysis concentrate only on known problem areas due to the time consumed in measuring all ellipses on a formed part. However, this shortcut leads to a risk of not characterizing other important areas. Experience helps to reduce the number of areas that should be measured. To ensure evaluation of all areas, many companies choose to use a noncontact, full-field camera-based system for grid measurement and analysis. The grid pattern, though applied in the same manner, typically employs a square rather than circle grid. The touching corners of the squares resemble the nodes seen in computer forming simulation, with the movement of these nodes tracked and the magnitude of the displacement converted to forming strain.

A camera-based system proves more repeatable and provides more precise measurements than the manual approach described, but can suffer from the same challenges—both require a grid pattern in sufficient contrast to the underlying metal. In addition, the camera and associated software are costlier than the tools needed to make manual measurements.

Both the manual and grid-based camera approaches can be applied on the shop floor. A newer method relying on digital image correlation is more appropriate for laboratory analysis. Here, the sheet metal surface is painted twice, first with a base white layer followed by a top layer containing small black dots. A camera follows the forming operation, with software continually monitoring the movement of each of the black dots. The computer software calculates strains in the same manner as before. Precise measurements are made over very small regions, but these measurements can be influenced by the paint-application techniques. MF 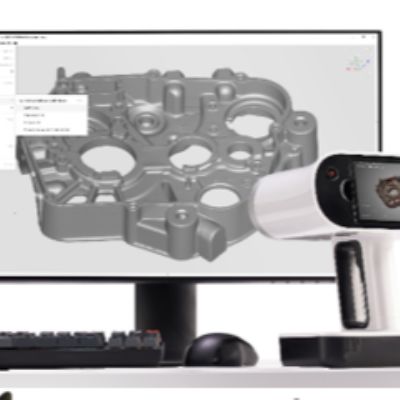