Rob Bisbee sees quite an uptick in manufacturers across lower-tiers metalformers seeking out robotics to ease the metalforming process, keeping employees out of harm’s way while boosting productivity in various applications. As senior automation engineer at Greenerd Press & Machine Co., Inc., he’s in a position to know. With the Nashua, NH, hydraulic-press provider recently announcing that it has become a Tier One Industrial Authorized Robot System Integrator of automated-equipment manufacturer Fanuc America Corp., Greenerd has full access to Fanuc’s comprehensive roster of robots and related automation. The company has been busy working with metalformers keen on introducing automation into their operations, and MetalForming thought it would be a good time to tap Bisbee’s expertise and find out why hydraulic presses and robots can be an ideal fit.

Robots More Affordable, Easier to Use

While robotic cellular manufacturing has been a popular trend in fabricating applications, more recently, an increasing number of hydraulic-press users have expressed serious interest. Affordability and easier-to-handle technology are major reasons why.

“Overall, we have seen a trend of metalformers wanting robotic systems, and we’ve been quoting more of these,” Bisbee offers. “Either they are looking to team a new press with a new robot, or bring in a new press with the ability to tie in robotics later on.”

This holds true across the different tiers, even reaching into ‘mom-and-pop’ operations, as robots become increasingly affordable to buy, program and run. Some can ROI-justify a full robotic press cell, while others with a lower capital-expenditure budget, can install a press now and have it wired and oriented to easily accept robotics down the line.

Why Bring in a Robot?

“Customers tell us that a part is too large, heavy or awkward to handle manually, or placing or orienting blanks involves too much reach into a press,” says Bisbee. “In other cases it is just a matter of speeding production and increasing productivity.”

“Due to the increasing ease-of-use when operating robots, less technical expertise is needed to program and run robots, which makes the technology more accessible to metalformers across the board,” Bisbee says. “Not that robot capabilities have decreased —they are way up. But users easily can program robots for many applications these days.”

Key to programming ease are intuitive, smartphone-like user interfaces with real-world language, teach pendants, and even the ability to hit a ‘record’ button to save sequences that can include end-of-arm-tooling actions and robot-arm manipulations. The robot saves those movements to run again in the future, resulting in consistent, repeatable operations.

“This can be done for many simple applications, such as unloading small parts or placing them here or there,” Bisbee says. “More complicated procedures involving multiple-axis movement and various in-press maneuvers require more intricate programming, but even that has become easier.

“You don’t necessarily have to buy a robot just to run a high-volume repetitive job,” he continues. “You can buy it to help with a 100-part run, and then switch over for a different 100-part run. You don’t need a master programmer to program a robot.”

We can see why robots are becoming more and more common in pressroom environments, and a complementary relationship between hydraulic presses and robotics can bring even greater benefits, according to Bisbee.

“In automated cells with hydraulic presses, a robot can perform in conjunction with the press in a unique way,” he says. “At times the press controller communicates with the robot, telling it what to do and when and where to move. At other times the robot controller tells the press to move to a certain position in the stroke or at a particular speed in order to place, remove or orient a part. And, the communication path can be changed dynamically, as material travels into a press, and as a part routes through and out of the press. At Greenerd, we refer to this as Dynamic Press Control.”

Bisbee points out one current application where, during a draw sequence, the press communicates with the robot, instructing it when to enter the press to hold and extract a part. As the robot removes the part from the tooling, it communicates instructions to the press, telling it to move at a certain velocity and hold a certain ram position during extraction to help ensure proper part removal and the desired part orientation.

“Often with a mechanical press, the ram descends, forms the part, ascends and then tells the robot to retrieve the part,” he explains. “The press and robot basically handshake on a discreet level. In the case of a hydraulic press and robot, they communicate on a much higher level to actively handshake and know exactly what the other is doing. It is very complementary.

“These 72-in.-dia. blanks had to be maneuvered by two or three employees into and out of the press,” recalls Bisbee. “Being vertical presses, using cranes to place blanks and orient parts proved difficult.”

Given the large and heavy blanks, Greenerd proposed automating the front end with a robot loading the horizontally oriented press.

“We provided a cell where, on one side of the press a load robot places a blank in the press, and because the press is horizontal, holds the blank as the ram closes the tooling around the material,” he explains. “Once the press has hold of the blank, the robot exits and after the robot is clear, the press performs a draw. After the draw, a second robot on the other side of the press enters to remove the drawn part, clearing the tool and allowing the first robot to reload another blank for another draw. Here, a cushion assembly used during drawing ejects the part material from the tool.”

Prior to installing the new cell, explains Bisbee, the cushion would push the material part-way off of the tooling, then an operator would come in to manipulate the material, followed by another push and more manipulation—a time-consuming process that also required excessive manual reach and handling.

“Now, after the draw, an unload robot holds the drawn part while the cushion ejects it,” he says.

At this point, the robot essentially performs the same duties as employees had in the previous setup, but instead can maneuver material while the press ram opens and the cushion pushes, saving a large amount of time. This is where the robot and press communicate back and forth, with each taking direction from the other throughout.

This process repeats for five draws, with dome-shaped parts created from the master blank. Whereas the metalformer had taken roughly a week to run 25 blanks through this process, now, with the new cell setup, that’s been cut to a day-and-a-half, a 233-percent increase in productivity.

With the increase in productivity, the metalformer freed its vertical presses for more work while improving employee safety, according to Bisbee. One operator still assists with loading pallets of blanks and another with removing drawn-part pallets, and productivity gains have delivered new work, so no employees have been replaced via this automation.

Chances are that a robot-press team can pay dividends for metalformers large and small. Dealing with hazardous materials? Experiencing bottlenecks due to manual handling? Manipulating large, heavy and unwieldy blanks or parts? Want to hold a forming operation to perform secondary processes in the press? All of these can be addressed with robotic automation. With costs decreasing and the learning/programming curve flattening, now may be the time to see where a robot teamed with a hydraulic press makes sense. MF 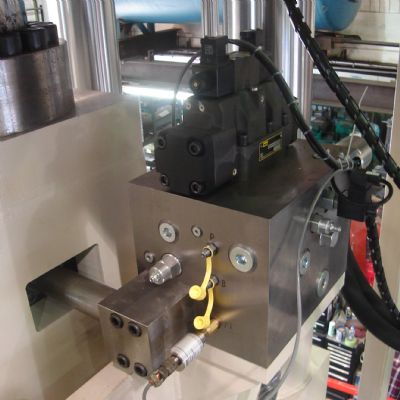 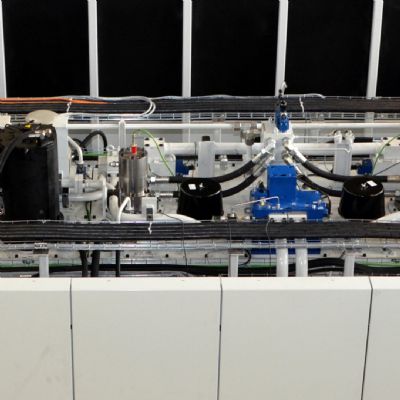 
Developments in Motors, Drives and Controls Impacting the Pr...