Decorative metal trim on appliances such as cookstoves and dishwashers—kick plates, door covers and control panels, for example—can make or break showroom sales. So, when it comes to stamping said parts, the pressroom technology in play must be state of the art, providing precision, repeatability and—yes—productivity. 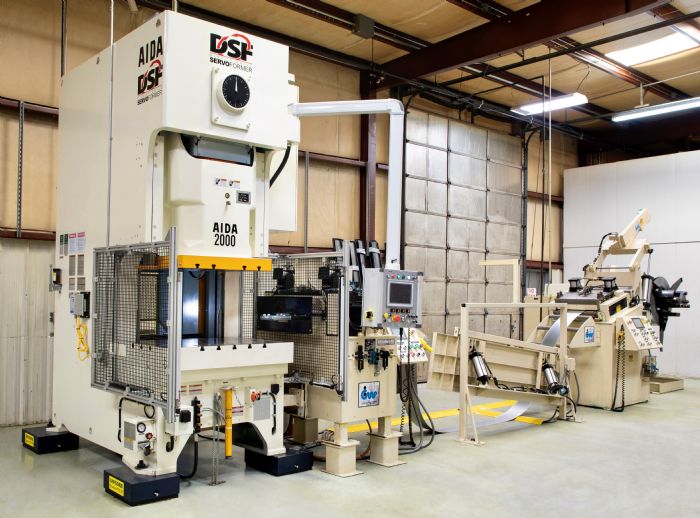 The management team at second-generation family-owned Henderson Stamping, Henderson, TN, epitomizes the return on investment from employing the latest metal-stamping technology to serve the appliance market. As noted on the stamper’s website, “Henderson Stamping knows that before your first part is ever made, it is vital to design a plan that will eliminate any possibility of shipping non-conforming products. Utilizing advanced quality planning tools, control plans, process-flow charting and PPAP, (we) evaluate and understand your stamping needs and expectations. (We) then implement a manufacturing process that ensures production of a quality product that meets expectations.”

Launched in 1981 in a 4000-sq.-ft. building, with presses less than 200 tons and a focus on assembly as well as stamping, today Henderson Stamping boasts more than 125,000 sq. ft. of manufacturing space among two plants, and another 40,000-sq.-ft. warehousing/shipping facility. It counts 20-plus production lines, including several robotic-transfer lines, with press capacity from 45 to 1200 tons.

“We’re 65-percent appliance, with the rest in automotive, heavy truck and HVAC,” says company president Clay Porter, son of the company’s founders Jimmy and Betty Porter. “We’ve made concerted efforts to diversify in the last 5 to 6 years, yet more than half of our stamped parts are decorative stainless-steel appliance components.”

Annual Part Volumes in the Millions

In addition to its decorative stainless-steel business, Henderson Stamping also processes tons of mild steel—think brackets and other structural components that customers order by the millions. Which brings us to the latest press to hit the production floor at Henderson Stamping, a 220-ton gap-frame servo press (an Aida DSF-C1-2000A), the third servo press added since 2020. This latest press addition earned Porter’s trust when he landed an important new project from a long-term customer.

“I’d been working to land this program for several months,” he says, “calling for 10.5 million stampings/yr. for a key appliance customer. We sought to add a press (late in 2020) that we could dedicate nearly entirely to this specific job, to ensure that we’d have the capacity to meet the customer’s needs without taking anything away from other customers and projects. Aida was able to provide (in March 2021) the perfect press for the job, including the control package we sought. It shipped and installed the press in just a matter of months. Their team knocked it out of the park.”

The part in question: an oven bracket (approximately 8 by 1 in.) stamped from 0.030-in.-thick mild steel in a 10-station progressive die. Why a servo press?

“I certainly see servo as the way of the future,” Porter says. “I’m 38 years old and plan on doing this for another 30 years, so when I look to buy equipment, I want it to perform well, and last a long time. And, when we’ve moved existing work from conventional presses to servo, we’re, in some cases, increasing stroke rate by four to five times.”

Case in point: a gusset plate stamped for a dryer top that once ran at 40 strokes/min. in a 110-ton conventional mechanical press, which now runs in pendulum mode in the new Aida servo press at 134 strokes/min. So, when it comes to stamping the new brackets for which Porter specifically purchased the new press, “we’re at 110 strokes/min.,” he says, “but expect to reach 130 strokes/min. once we install some new part-out sensors to verify that we’re successfully moving stamped parts out of the die.”

With such a notable increase in press speed, Porter now faces challenges that other stampers implementing servo press technology may recognize. Most notably: The press runs through coils of sheet metal much more quickly compared to stamping with a conventional mechanical press.

“We’ve shifted our focus from increasing press speed to keeping the presses fed with material,” Porter says, “including fine-tuning our coil-line changeover process. And, for this new press and our other servo presses we’ve specified state-of-the-art coil lines.”

For the new Aida, Henderson Stamping added a 25,000-lb.-capacity coil line from CWP that can process much larger coils than most of the firm’s other progressive-die presses. The line is rated for a maximum 24-in. coil width, with a minimum 16.5-in. core diameter and 60-in. maximum coil OD. The line includes a leveler rated for 24-in. material with maximum sheet thickness of 0.187 in., and can level as much as 100 linear ft./min.

As for key press specs, the DSF-CI-2000A boasts 58 in.-tons of working energy at 0.2 in. from stroke bottom, with a 9.8-in. stroke length, 17.2-in. die height and 57.9 by 33.1-in. bolster area. “Most importantly, though,” explains maintenance supervisor Joey Puckett, “is the Allen-Bradley control—it’s superior to anything else we have here. For example, we’re not limited in terms of the number of programmable limit switches (PLSs) that we can implement, while some of our other presses only allow us to implement six or eight PLSs. In addition, we use Allen-Bradley elsewhere in the plant, so our maintenance technicians are well-versed in how to work with the press control. Finally, we easily can interface the press with our other equipment to help us track part counts, quality and press uptime.”

Per Rockwell Automation, using its control platform for servo press applications provides “a smart servo press solution based on an open, configurable design concept as a cost-effective alternative. Derived from off-the-shelf control system components and technology, the solution enables (stampers) to configure an infinite number of motion profiles, restricted only by processor memory. A smart servo press solution uses a single control platform for logic, motion and safety control, which speeds machine design. An integrated platform also gives workers better visibility to all machine events—including safety. When it comes to safety functionality, a smart servo press solution can extend beyond the press itself to include front-of-line and end-of-line tooling, such as stackers, destackers, decoilers, and loading and unloading automation. This equipment can be integrated into the same controller running the press in smaller applications—or interlocked and synchronized with the press controller over Ethernet/IP. So, the tooling at the front or end of the line can leverage the same advanced safety motion commands and profiles in the press controller project.”

While pendulum mode on the servo press has Puckett excited about the increased stroke rate, he is keenly aware of the other benefits provided by servo press technology. Among them: the ability to restrike in a progressive-die station to obtain tight dimensional tolerances, and to stamp higher-strength materials and control reverse tonnage, increasing die life.

“In the end,” Puckett says, “we were able to process a coil that we likely would have thrown away or rejected, and get it set up and run at a speed much faster than if we had used a conventional mechanical press. We ran the entire coil in 24 min., compared to what would have taken a solid 4 hr. to fight with otherwise.” MF 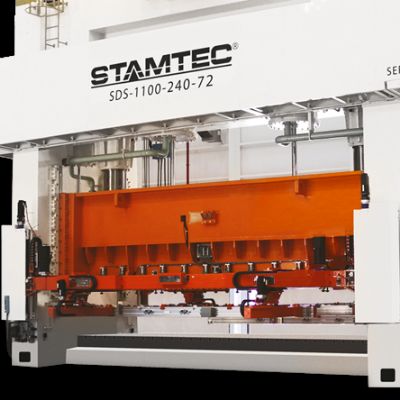 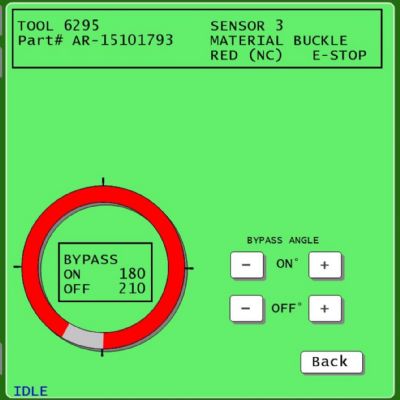 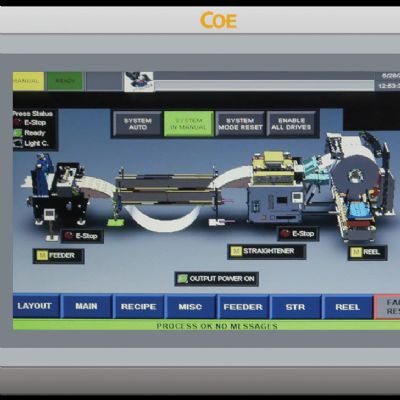 
On the Precipice of the Smart Pressroom