Metalformer Clips & Clamps Industries plies its trade in Plymouth, MI, the heart of automotive country, and does so by exploiting its engineering prowess. Noting that the company always has been engineering-focused, reflecting the mindset of owner Michael Aznavorian (once an engineer at Ford Motor Co.), the company’s director of engineering Jim Williams, says:

“Mike supports our efforts to use technology to appeal to customers. That’s where we shine as a metalformer. We seek to work with customers’ engineering teams to enhance their products for manufacturing feasibility, and move beyond just quoting to print.”

Such dedication to engineering support for its customers (Clips & Clamps staffs a team of engineers) helps to keep it toward the top of the supplier list of its number-one customer, FCA. And while Clips & Clamps has diversified by becoming a Tier Two supplier to other major OEMs, its close ties to FCA often reunite its engineering team with that of FCA.

Case in point: a wheel-bearing cap FCA brought to Clips & Clamps a few years ago, which had been manufactured in Europe for the Fiat 500, and which FCA sought to source in the United States when it launched vehicle production in Toluca, Mexico.

“We form a lot of brackets and stampings in progressive dies,” says tooling supervisor Jeff Szarek, “but we do not have a lot of drawing expertise, nor the equipment to do so. However, FCA really wanted us to produce these caps (called out as ‘grease cups’ on the engineering drawings), which we all felt were perfect for forming on an eyelet press. As we don’t have that equipment, in order to satisfy FCA we sought a solution for drawing the parts on our 300-ton mechanical press.”

Part features—specifically a tapered body and an offset bead around its circumference—meant that attempting to produce the part in a traditional progressive die would require secondary operations. In an effort to avoid secondary ops, and to optimize material utilization by avoiding a healthy carrier strip for the part, the Clips & Clamps engineering team enlisted the help of die supplier RCM Inc., and tooling engineer Bob Gunst. Gunst had recently developed a Micro Transfer die-mounted system. It’s designed to bring large-part transfer capabilities to smaller part applications, and Gunst believed the system was perfect for the job.

The plan: implement one of Gunst’s Micro Transfer systems, which he brought to market in 2007 under the company name Jacar Systems LLC, into a coil-fed die developed for Clips & Clamps. The resulting die, at peak producing some 30,000 parts/yr., features a transfer system with a 6-in. pitch, along with 2 in. of in-out travel and 1 in. of lift.

The part is stamped from 0.040-in.-thick mild steel delivered to a 300-ton Minster mechanical press as 3.85-in.-wide strip. The six die stations create a 3.5-in.-dia. round blank, form a 1.5-in. draw, trim the hat-shaped part, coin the edge and add the offset bead feature.

Gunst’s all-mechanical transfer system runs directly off of press-ram motion—no electronics or servos. An attachment in the upper tool synchronizes transfer motion to ram movement—the downsized transfer rails move in as the press opens, then index the part forward as the ram reaches the top of the stroke. As the press closes, the transfer systems brings the parts down into their die stations and the rails retract. Most of the Jacar systems, says Gunst, run at 15 to 30 strokes/ min.; the Clips & Clamps die runs at 25 strokes/min.

“The solution has worked perfectly,” says Williams. “We were able to avoid a costly carrier strip and secondary operations, and we were able to solidify our relationship with FCA by keeping the job inhouse. And, during the development of the die we actually improved on the part design, fit and function by specifying additional taper of the inside diameter of the part. This improved the assembly process and improved their function in service on the vehicles.”

Always a critical factor when moving parts that reside within a stamping die is proper, reliable sensing, and this die has sensors aplenty. “The die contains 12 sensors,” says Szarek. “It’s the first tool here where we had to use both sides of the control’s channel setup. There are two umbilicals leading out of the die, and part-presence sensors at each die station. We also sense to verify transfer motion, as well as coil feed and part-out.”

Part quality has been exceptional from day one, Williams says. “We don’t even have to deburr the parts coming off of the die,” he says. They are sent directly to the plater.”

Tolerances are tight to accommodate press-fit assembly—±0.2 mm on OD and 0.5 mm on draw height. The press operator periodically visually inspects parts exiting the tool for burrs, and employs a test gauge to measure part OD and runout. And, with every coil he performs a push-out test in the company’s quality lab, press-fitting the part onto a block and recording the amount of ft.-lb. needed to remove it.

“It’s a tricky die with a lot going on inside,” Williams adds. “While we typically would not make this type of part, the project was an overwhelming success—for us and for our customer.” MF 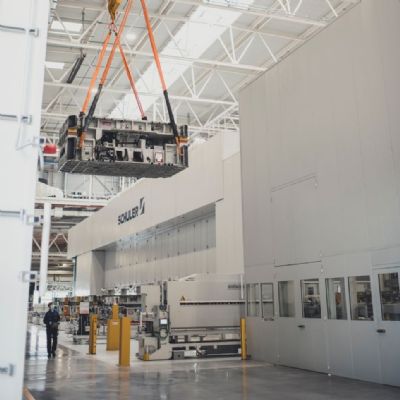