Prior to 1960, requirements for higher-strength steels were met by higher-carbon or cold-worked steels. These methods for increasing strength came at the expense of formability. Then came high-strength low-alloy (HSLA) steels, developed using thermal mechanical processing. Strength increased with minimum reduction in formability, due to steel modifications including smaller grain size, replacing an iron atom in the atomic structure with another element and adding other elements inside the atomic cell structure. Early HSLA steels boasted yield strengths of 35 to 50 ksi, and yield strengths of newer HSLA steels approach110 ksi. 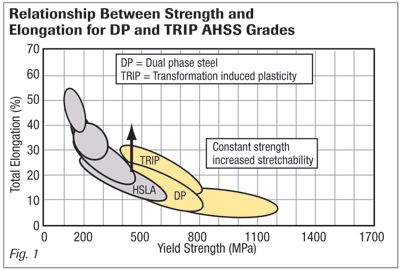 (Note: For information on forming these steels, see the article titled, Forming Higher-Strength Steels, in the April 2008 issue of MetalForming).

Today, greater demands are being placed on higher-strength steels. These include:

2) Part consolidation, often requiring the forming mode to change from deep draw to stretch. Consider an assembly of three separate and easily formed parts—after trimming, welding joins the three pieces. Now attempt to stamp the same final part from one blank in a three-cavity die. Without a binder between cavities to allow steel to flow and create adjacent walls, the forming mode becomes stretch. Stretchability decreases as strength increases.

Responding to the demand for higher-strength steels with increased formability, steel researchers have taken a completely new approach to increase strength. Low-strength and HSLA steels have a single phase called ferrite—a crystalline microstructure of pure iron with small amounts of carbon. Advanced high strength steels (AHSS) boast microstructures with one or more phases other than ferrite, such as martensite, bainite and retained austenite. The use of other phases allows steel mills to produce new steels with initial properties and response to deformation that more closely match the needs of the product and process designs.

1) Steel grades with increased formability for the same initial yield or tensile strength. This improvement is shown for total elongation as a function of yield stress (Fig. 1). Similar curves can be drawn for tensile strength and/or work-hardening exponent (n-value). Compared to HSLA steels of the same strength, the increased total elongation of a dual-phase (DP) AHSS allows smaller ratios of punch radius to thickness. DP steels also can greatly restrict the localization of deformation (strain) at high stress locations. These strain gradients are extremely variable and are a major cause of product dimensional variations.

In addition, peak strains can dramatically increase and reach failure conditions at less than home depth. DP steels strengthen at the onset of the gradient and minimize or even prevent their development. These improvements result from the introduction of islands of martensite in the microstructure. 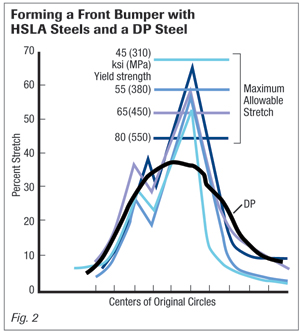 Fig. 2 illustrates the results of a forming study on a steel front bumper with various HSLA steels as well as a DP steel. Two sharp strain gradients were measured across the front of the bumper. Note the dramatic change in the gradients when testing DP steel—the effect of the DP steel is exhausted around 7 to 9 percent strain. Since the effect of adding islands of martensite are so important, metallurgists found a to replenish fresh islands of martensite and produce even better steels—transformation induced plasticity (TRIP). These grades provide significantly greater ability to flatten gradients than do DP steels. In addition, the maximum allowable strain at local necking (forming limit curve) is increased.

2) Increased yield or tensile strength for the same formability. Martensitic steel (MS, Fig. 3) is a single-phase steel of hard martensite. Depending on the temper, MS total elongation may range from 15 to 5 percent. Most parts made with MS are rollformed. 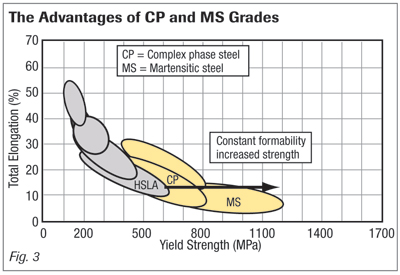 The other AHSS grade in this category are complex-phase (CP) steels, which gain their strength through extremely fine grain size and a microstructure containing bainite, martensitic, retained austenite and pearlite. CP is characterized by high energy absorption and high residual-deformation capacity.

3) Unique processing to obtain final properties. Product designs can generate parts previously thought impossible to make. In the real world, a purchase order might require forming a very complex part that requires the extremely high strengths of MS. The purchase order may not require deforming incoming MS—only that the end product exhibits those properties.

Many parts are made today using hot forming of boron-based steel with yield strength of 50 to 70 ksi, and 18-percent total elongation. The steel is heated to 850 to 900 C, placed in a press and formed. Forming yield strength is almost a constant 6 to 13 ksi and more than 50-percent total elongation. Very severe deformation can be obtained to create complex features in the part. After quick forming, the cold die quenches the part to the final strength of MS. While much slower than normal stamping, the one-hit process can make some parts that prove impossible to make using more traditional forming processes. 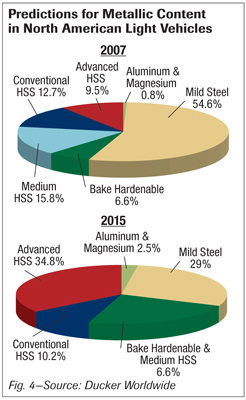 The trend a from HSLA steels to AHSS (Fig. 4) is noteworthy. Use of AHSS in North American light vehicles is expected to grow from 9.5 percent in 2007 to an estimated 34.8 percent in 2015.

The search continues for AHSS grades with even better properties. So far, our discussion covers Generation 1 AHSS grades (Fig. 5). A major jump in forming capability comes via the austenite-based products of Generation 2, such as TWIP (twinning induced plasticity) steels that are just now beginning preproduction experimentation. While these steels claim 60-percent total elongation and very high n-values, they are costly due to the high cost of alloying elements. Also, their complex composition makes the alloys challenging to weld.

Many researchers believe that most parts do not require the mechanical properties of Generation 2 AHSS grades, and so have begun to develop Generation 3 steels. These grades will feature less complex compositions than Gen 2 steels, and exhibit improved formability and weldability. 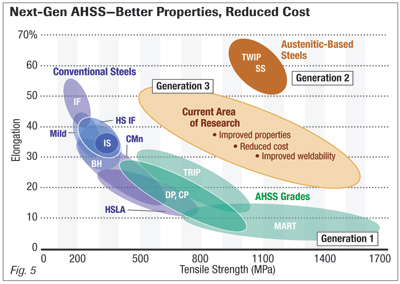 Even with the expected infiltration of AHSS grades in vehicles and other products, concerns remain. Among them: springback; forming speed and heat buildup in the die; and press tonnage and energy. 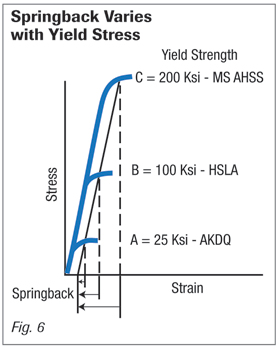 Springback, sidewall curl, and panel twist all have their origins in unbalanced stresses in the formed part. These stresses often result from the product design—nonsymmetrical geometries or cutouts, rapid changes in cross section or unequal flange lengths. Other causes include inconsistent forming-process parameters, including lubrication, polishing, blankholder forces, blank positioning and broken or worn draw beads.

• Use large open-wall angles to allow overbending and springback—6 to 10 deg. is preferred.

• Use open-end rather than closed-end stampings. 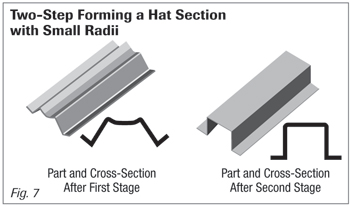 • Use stiffeners, darts, step flanges, etc. to prevent the release of elastic stresses and reduce springback, where part design allows.

• Design punch radii as sharp as formability and product design will allow. Radii less than 2t will reduce springback angle and variation.

Because steel work-hardens as it is drawn over a die radius, the resulting higher strength will cause increased springback and sidewall curl. This makes restrike operations difficult. Thus, stampers should strive to limit material movement across these radii.

Automotive design engineers often specify the use of channel or hat-style sections in structural product designs. Unfortunately, the 90-deg. angles, parallel walls and the need to bend the sidewalls over a radius all contribute to the potential for increased springback. To achieve a desired channel height while limiting movement across radii, form hat sections using a two-step approach—the gull-wing process (Fig. 7). First, form all 90-deg. radii and mating surfaces with the required overbending for springback compensation. Flattening the large radius in top of the hat section occurs in the second operation, which may require additional overbending of the flat, top section to produce parallel walls. 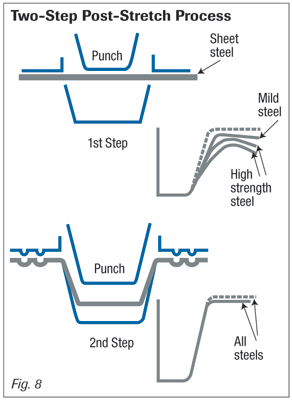 Multistep forming operations prove helpful for parts having small, severe geometry features that can only be formed in restrike stations. Another such method is called Shapeset, a form-and-flange die process developed at General Motors Research (Fig. 8). A form die or draw tool (without draw beads) forms the part, which is then placed into a second tool designed to lock out the remaining flange. A lower pressure pad with lock beads engages the blank and upper die steels approximately 6 mm or less from bottom-dead center (BDC). The part is then stretched over a die post prior to the press reaching BDC.

The resulting stretch (about 2 percent) in the part usually will sufficiently reduce residual stresses and part-to-part variations. A lower lockdown device is required to avoid deforming the part on the upstroke caused by opposing pressure pads.

Forming with wiping dies requires the use of pressure pads to prevent the workpiece material from slipping when formed. Pad-pressure requirements for wiping dies generally equal the punch force required for forming—for AHSS, pressure-pad force may be three times that required for an equivalent thickness of HSLA. These levels of holding force may be difficult to achieve in small wiping dies or in a small die area.

The higher forming stresses on die materials and the need to further work the material to reduce springback can potentially create large tool deflections. Forming steels must be keyed and properly heeled to control tooling deflection and maintain part quality.

Stampers should incorporate overbending into the wiping die to compensate for springback. Anticipate as much as 10 deg. of springback, depending on the grade. 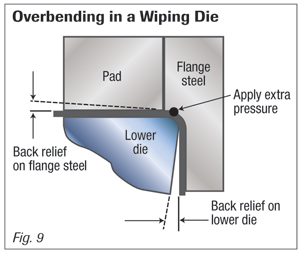 To coin AHSS and reduce the material thickness through the radius, the die must exert very high pressures in the flange-steel corner radius. Significant concerns under these conditions include flange-steel wear, strength and reliability.

The increase in yield and tensile stress of AHSS with forming speed is minimal–only 2 to 3 ksi/per 10-fold increase in forming speed, from tensile-test speed to 10 in./in./sec. (many press forming speeds). This stress increase is less than that for AKDQ steels. Over the same forming speeds, the work-hardening exponent remains constant.

While the increase in strength for a press-speed increase from 12 to 16 strokes/min. is negligible, the number of parts, amount of energy and the accompanying heat increases by 33 percent. When changing strength levels (grades) within a steel type, higher-strength grades also require greater force, resulting in additional energy and heat. This increase in heat can reduce lubricant viscosity and even cause lubricant breakdown.

An obvious concern when stamping AHSS is the force capacity of the stamping press. Less obvious, but of primary concern, is the available press energy to carry out the stamping operation and keep the press running continuously. Press tonnage and press energy are not the same.
The tonnage rating of a press represents the largest load that the press can apply without causing structural damage to its frame, slide-adjusting mechanisms, connection rods or main gear bushings. Calculate the tonnage required to carry out the necessary work (W) by multiplying applied force (f) and its working distance (d): W = f x d.

The energy rating of a press depends on the applied press load and the distance through which the load is applied. Consider deep drawing an HSLA steel, pushing 200 tons through 3 in. This application requires 600 in.-tons of energy. Forming AHSS could require 500 tons of force working through the same 3 in., expending 1500 in.-tons of energy.

Because energy is expended with each stroke of the press, and this energy must be replaced, critical attention must focus on the size of the main drive motor (horsepower) and the rotational speed of the flywheel, especially for AHSS applications. The amount of energy stored in the flywheel depends on its mass and rotational speed—stored energy varies by the square of the speed. Thus, a large amount of energy can be stored in the flywheel when the press runs at full speed; the available energy of a press diminishes as its speed drops. This is important to realize, because many stampers will reduce the operating speed of a press to reduce the amount of additional heat generated when forming AHSS. However, at these slower speeds, flywheel size becomes the limiting factor for delivering the required press energy. We recommend use of computer-based forming simulations to evaluate force and energy requirements when stamping AHSS.

Lastly, consider the attributes of a servo-drive press when determining press force and energy requirements—that’s the subject of this month’s Tooling By Design column. MF 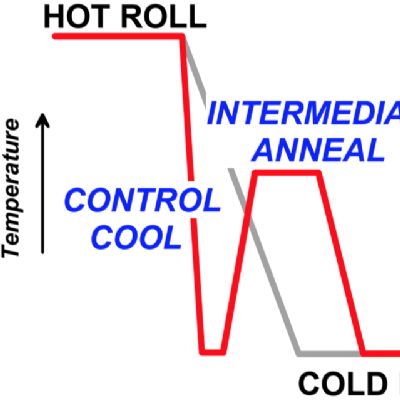 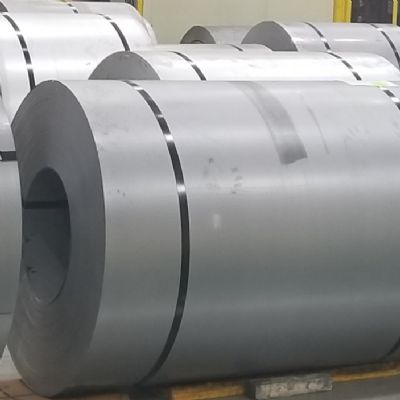