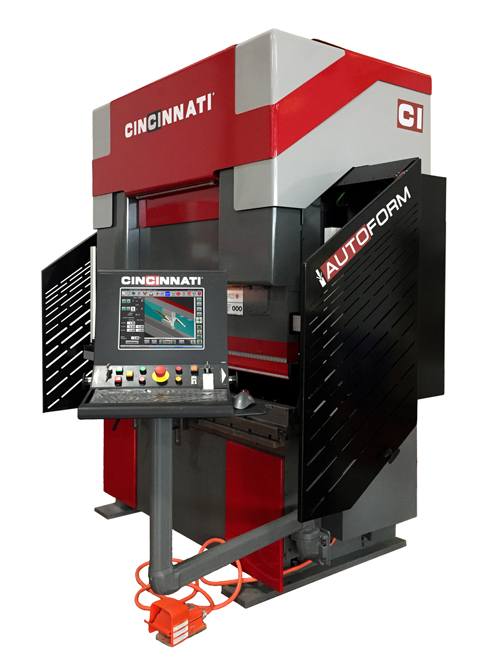 Cincinnati Inc. (CI) will introduce its newly enhanced 60-ton Autoform hydraulic press brake, the company’s first compact hydraulic machine available with a six-axis backgauge and 6-ft.-long bed. The machine, with an 83 by 48-in. base, includes a swinging pendent control that can be positioned in front or at the side. Key features include ± 0.0004-in. ram repeatability, 11-in. stroke length and rapid forming speeds–programmable from 1 to 120 in./min. The available six-axis backgauge allows users to excel at fabricating small, complex parts with greater throughput than a larger machine, according to company officials.

The Autoform also incorporates many of the same advanced features introduced on the company’s electric Goform press brake, including CI’s Angle Measuring technology. This feature automates the manual method of measuring and adjusting bend angles. During production, a high-speed digital camera, mounted to the machine, captures images of the bend. The images are analyzed and the press is commanded to continue bending until the part within the desired tolerance.

The press brake eases operation due to its compact ergonomic design, as the machine’s controls can be reached with minimal movement. In addition, feedback from users has resulted in an inhouse-developed, simple-to-use interface that enables inexperienced operators to produce quality parts with minimal instruction, according to CI officials.