Shorter lead times and the need to turn product faster have driven the leadership at Sure Tool & Engineering Co., Franklin Park, IL, to invest mightily in new sheetmetal-fabrication technology—laser cutting, CNC punching, electric press-brake forming, and resistance and arc welding. While company vice president Julian Burnley and director of operations Tim Berger are quick to point out that the company’s once-shrinking stamping operations have rebounded nicely in recent years, it’s the flexibility and quick response it can achieve with fabrication that fuel its ability to satisfy customer requirements. Specifically, laser cutting, CNC punching and press-brake forming enable the firm to efficiently produce small lot sizes of parts and meet lead times as tight as a couple of weeks or less.

An overwhelming majority of Sure’s work goes to the point-of-purchase (POP) industry, manufacturing displays, shelving and other store fixtures primarily from powder-coated mild steel, with a bit of stainless steel, aluminum and copper alloys thrown into the mix. From its launch in 1962 until the mid-1980s, high-volume metal stamping satisfied its existing client base, “until much of that work started to head overseas,” says Burnley. “We began our transition into more of a low-volume higher-mix shop in the mid to late 1990s when, under new ownership, we moved into a larger building (41,000 sq. ft., four times larger than its original digs) and began to bring in fabrication equipment.”

The March into Fabrication

…accelerated in 1999 with a 15-station CNC punching cell, followed two years later by a second punching cell with automatic load/unload, and in 2005 by a third CNC punching cell that includes the ability to form flanges to 3 in. and tap threads in sheetmetal to ¼ in. thick.

“We brought in Sabine and then Helena to cut faster and also to accommodate thicker material,” Berger says. “Prior to that, we were outsourcing work thicker than 3⁄8 in. to local plasma-cutting shops. With the newest Trumpf machine, we no longer have to do that. And, since we now can laser-cut steel to 1.0 in. thick, we’ve been able to quote more work outside the POP industry, which has allowed us to earn work for the snow-removal industry and others.

“The domino effect is noticeable,” Berger continues. “Our newly expanded cutting capabilities led us to expand our forming operations by adding three new electric press brakes in the last 12 months, as well as add a Haeger insertion machine, four additional spot-welding machines and three new arc-welding stations, including one specifically for aluminum welding.”

Another testament to the firm’s growth: Its recent need to laser-cut lights-out, unmanned on a short third shift. Sure Tool vp of engineering Carlos Rivera explains.

“We were making POP displays for a large retailer, to showcase its selection of tablet computers. The job required us to fabricate 5000 sheet’s worth of one part design and 4700 of another, and all of the parts had dozens of holes. We started by running the sheets (5 by 10 ft., of 16- and 18-gauge mild steel) on our turret press but needed more capacity. So, we enlisted Helena. While laser cutting can’t keep up with a turret press for hole-intensive parts like these, we were pleasantly surprised that, running lights out, the laser averaged 12 min. of processing time for each sheet, compared to 10 min. per sheet on the turret press.”

Other than Cutting Speed, What Else Matters?

We posed that question to Rivera, who—as expected—had no problem coming up with an answer.

“Edge quality is critical to our applications,” says Rivera, noting that the firm cuts everything except for very thick work with nitrogen, to enhance adherence of the powder coating.

“Also, our POP displays must be attractive to consumers,“ Rivera adds, “so as we looked to invest in this newest Trumpf cutting machine, cut-edge condition became a critical requirement.”

Enter Trumpf’s BrightLine technology, developed to enable the cutting of thicker material with the solid-state process, typically reserved for thinner sheetmetal. For example, while the TruLaser 5030 solid-state system previously was rated for cutting 20-mm stainless steel and 25-mm mild steel, the machine could not process higher-strength materials at the same level of quality that a CO2 laser could. Fabricators might wind up with uneven cut surfaces and edge burrs. BrightLine—new technology that according to Trumpf literature accelerates the cutting gas to a high velocity, and provides customized process parameters—eliminates those concerns. Rivera concurs.

“In mid-2013, we landed a job to fabricate POP displays for an automaker, requiring us to cut 5⁄8-in. steel plate,” Rivera explains. “When we cut the material on Sabine (the 3-kW solid-state machine), the customer accepted the parts. However, we felt that edge quality could have been better. When the job came back to us earlier this year, we ran it on Helena (the 5-kW machine with BrightLine technology) and we saw a huge improvement in edge quality. And, the job ran at a faster cutting speed. We’ve seen this type of quality improvement across the board—no discernable burring or slag, and minimal surface roughness on the cut edges.”

What About the Narrow Kerf from Solid-State Cutting?

Rivera offers a good answer to this question, as well—one that often comes up when discussing and comparing solid-state laser cutting (using either fiber lasers or Trumpf’s TruDisk solid-state technology) with CO2 laser cutting. Bottom line: the narrower kerf from the solid-state laser beam can impede cutting of thicker material, including making it difficult to extract cut parts from the skeleton. Not so with the BrightLine feature, says Rivera.

“We cut ¾-in. steel for our plow customers, large pieces 2 ft. long with a very contoured edge,” he explains. “If we tried to do this on Sabine, the narrow kerf would make it difficult if not impossible to extract the cut parts. Running the job on Helena, the wider kerf we can develop with BrightLine technology allows us to extract the parts using an overhead magnetic manipulator.” MF
Industry-Related Terms: Alloys, CNC, Edge, Form, Forming, LASER, Point, Powder Coating, Stainless Steel, Surface, Turret Press, Turret
View Glossary of Metalforming Terms 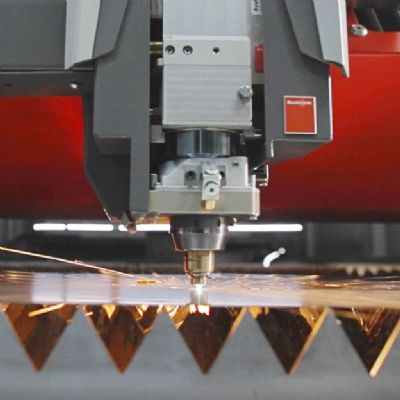 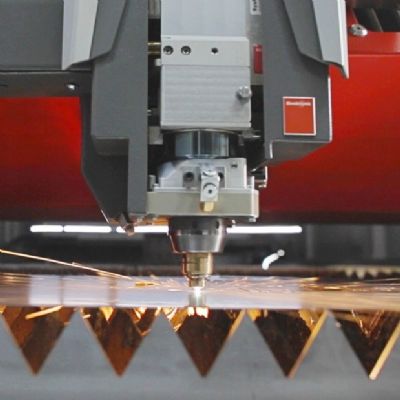 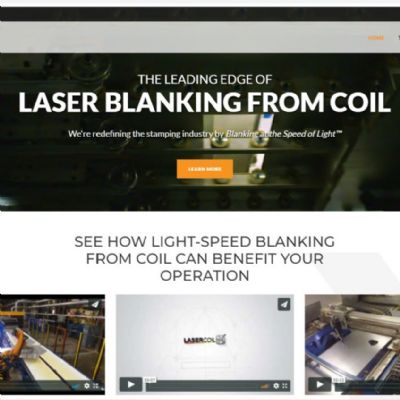