Lasercraft processes cold-rolled steel, aluminum and stainless steel, from the thinnest sheet that ranges from 0.060 to 0.120 in. to the thickest —11 to 16 gauge. Tube diameter maxes out at 14 in.

Most of Lasercraft’s projects call for laser cutting of custom-designed formed parts with complex geometries —work that many metal spinners and stampers often prefer to subcontract. Serving that market for more than 20 years, the firm operates more than a dozen laser-cutting machines, the newest of which is a five-axis Prima Power Laserdyne 430 workstation. This new addition to the Lasercraft shop offers a large work volume (585 by 408 by 508 mm) and is designed for metal and nonmetal cutting, welding and drilling. It boasts the Prima Power BeamDirector compact rotary- and tilt-axis head—900 deg. of rotary motion and 300 deg. of tilt motion—reportedly the only head that allows drilling at an angle of 10 deg. off of the surface along the entire stroke of the linear axes.

“When we saw the potential with this new machine,” he says, “equipped with some new software (Prima Power Fasttrim and SmartTechniques), we were pleasantly surprised at the speed and flexibility of the machine and its ability to process small and large formed parts. Since our part runs vary from a few prototypes to 10,000 parts per month, the system has proved to be an ideal addition to our shop.”

Fasttrim CAD-CAM software enables Lasercraft to model parts, define process paths and feature locations, and build part fixtures. It allows posting of a complete program for 2D and 3D laser welding, drilling and, most appropriately, for Lasercraft’s complex and challenging cutting applications. “The new machine along with the new software has proven to be a revelation for the productivity improvements it provides,” says Claycomb.
According to Prima Power literature, among the stand-out benefits delivered by Fasttrim:

The SmartTechnique software, meanwhile, keeps the cutting nozzle properly spaced from the part surface for optimal processing, and even corrects for part placement and variation when processing rotary parts on a vertical axis. Another SmartTechnique application, Smart Pierce, according to Prima Power Laserdyne, provides productivity improvements to Lasercraft by eliminating large pierce points and achieving relatively fast pierce times, minimizing the potential for part distortion. That’s particularly important on thinner metal-spun and stamped parts, according to Claycomb, for accuracy and for cosmetically correct appearance. Also, Smart Pierce helps to minimize drilling spatter.

And, yet another feature Lasercraft has begun to utilize: right-angle assemblies for the standard focusing lens, for processing inside of cylinders with diameters as small as 60 mm.

Using the new machine and its accompanying software, with full part simulation and collision detection, Ed Farley, Lasercraft’s “shop-floor guru” and laser expert, has marveled at its performance, according to Claycomb. From the first complex cutting run of 10,000 parts for inclusion in new Hemi automotive engines, to a half-dozen prototypes for an appliance customer, Farley “was amazed, actually shocked, at all of the productivity benefits,” Claycomb says, “including the rapid output of part information and fast programming capability. Ed has been a key part of our success, as has our team of 14 employees.

“It all began 20 years ago,” Claycomb continues, “with Lasercraft cutting tubing and reflectors for the lighting industry. Soon metal stampers came to us with stamped parts with hole requirements they couldn’t handle, requiring five-axis processing and with short turnaround times. Just last week, a customer came to us on a Friday morning with prototype parts needing hole placement. Using our new machine, we processed and delivered the parts that afternoon.”

In addition to five-axis laser cutting, Lasercraft designs, builds and operates automated machining processes for some customers. So it’s no surprise that the company has plans to automate its new laser-cutting machine with material load/unload equipment.

“The machine design complements automation, with easy access from the front and both sides,” says Claycomb. “It’s really helped make our laser operations more efficient and productive at a time when our customers and the marketplace demand it.” MF


Hydraulic Presses: Better Than Ever 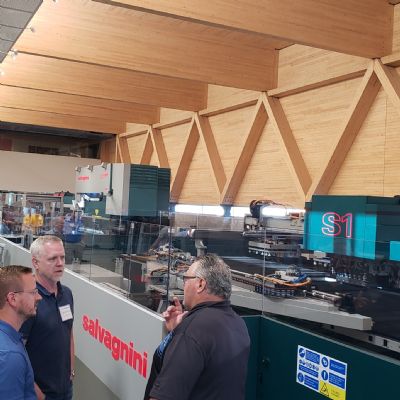