Las Vegas-based P&S Metals and Supply Co., a provider of metal-alloy sheet and plate as well as fabricated-metal products, has found a winning combination with a Mazak Optiplex 10- by 5-ft. laser-cutting machine paired with a 4000-W CO2 resonator. With its roots tracing back to the 1970s when the Vegas construction boom brought plenty of heavy structural fabrication its way, P&S has reinvented itself in recent years. As structural work has dried up in the Vegas heat, P&S has hit the proverbial jackpot with an uptick in plate and sheetmetal fabrication.

“We’re processing 1000 tons of steel sheet per month,” says P&S owner Gene Perry. “Some 25 percent of our work is for the slot-machine and highway industries. We fabricate for several suppliers to the slot-machine OEMs, and also fabricate metal signs, guard rails and decorative metal sculptures found along roads and bridges.”

P&S operates out of four buildings totaling 70,000 sq. ft. under roof, and boasts 35 employees. Its equipment list includes ¾- and 3⁄8-in.-capacity plate rolls, 10- and 16-ft. shears, a 16-in. press brake, an 18 by 25-ft. oxyfuel cutting machine (recently refurbished) and two laser-cutting machines, including its new Mazak powerhouse. In the shop when we spoke with Perry: thousands of pounds of sheet and plate being fabricated for renovation of 116 bus-stop shelters and advertisement boxes as part of the Flamingo Rd. corridor improvement project.

“We acquired our first laser cutter, a 2500-W used CO2 machine, in 2009,” recalls Perry, “and it has proved very productive on steel sheet to about 3⁄8 in. thick. Compared to our workhorse oxyfuel-cutting machine, the cuts were significantly better on that range of material. Customers at that time were demanding better accuracy and the laser provided that. And, cleaner edges meant little to no post-cut edge prep prior to welding.

“More recently,” Perry continues, “our market has created opportunities to grow into high-precision thicker-plate fabrication, ¼ to 1 in., which led us to begin a search for a higher-power cutting system.”

The search ended in September 2015 when P&S welcomed its new Optiplex 3015, which Perry says has taken over all of the thin-sheet cutting previously done on the older laser-cutting machine while also allowing the firm to bring in a significant amount of new, thicker work.

“The new laser has attracted several new customers,” he says, “including a local crane manufacturer. We’re cutting a lot ¼ to ¾ in. steel on the Optiplex, and even some 1-in. material, meeting very tight tolerance requirements—plus or minus 0.010 in.”

“And, we’re even more responsive to quick-turnaround customer requests,” adds Perry, “than we were before, often delivering jobs that used to take 2 or 3 days to complete in one day.

Staggered Shifts Keeps the Beam On

P&S operates the Optiplex 10 hr./day. Perry staggers his one-shift operation with one laser operator arriving 2 hr. earlier than the second. This allows the early arriver to immediately launch production of jobs that have been staged by the late arriver the previous evening.

In addition to cutting crane parts, P&S has loaded up the Optiplex with highway signage, guard rails and metal sculpture. And, Perry expects his highway business to boom throughout 2016, as construction on the new Interstate 11 gathers momentum. According to a fact sheet describing the new interstate, Las Vegas and Phoenix are the only two U.S. cities with more than 1 million residents not linked by an interstate. When completed (in 2018), the four-lane I-11 will link Arizona and Nevada. And along the route, drivers will have some very interesting decorative artwork to gaze at, thanks to P&S Metals.

“We are the primary steel fabricator for the project,” says Perry. “That project alone will bring us more than $500,000 worth of business, including laser cutting of signs, guardrails and some 30 metal sculptures, as large as 10 ft. tall by 5 ft. wide cut from plate 3⁄8 to 5⁄8 in. thick.” 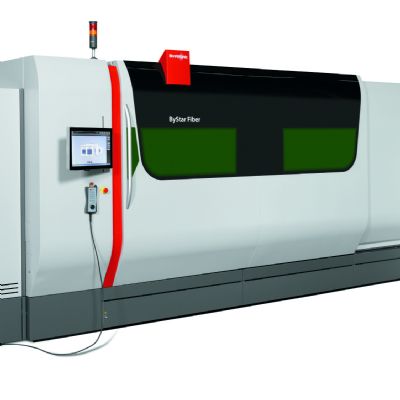