In its 43,000-sq.-ft. facility, Pyper Tool & Engineering Inc. designs and builds tooling to feed hungry North American and European automotive stampers, who comprise the vast majority of the Grand Rapids, MI, company’s customer base. For three years running, the company, established in 1979, has benefitted from the automotive boom, supplying chiefly progressive tooling to produce tight-tolerance instrument-panel and seating components. Besides supplying for customers that stamp mild and high-strength steel, Pyper Tool and its 62 employees operate across two shifts in creating tooling for aluminum stamping in ever increasing quantities. Automotive is the chief driver for the uptick in tooling for aluminum work.

Given the difficulties in forming a soft material such as aluminum, where galling is a major concern, Pyper’s tool designers and builders are challenged to create tooling that leaves the facility fully ready to perform as advertised on customers’ shop floors. To ensure production of quality tooling for aluminum and other stamping materials, Pyper Tool has invested in production stamping equipment for testing and tryout purposes.

The signature piece of new equipment is a 300-mton servo-driven press from Aida-America Corp., Dayton, OH, installed at Pyper Tool in October 2014. As of this writing, a feed line from Coe Equipment has just been added, giving Pyper unique capability in offering a full servo-press line for die testing and tryout, in addition to its mechanical tryout presses. Besides the obvious advantages of delivering tooling that promises to perform successfully in production, with the new servo press Pyper Tool can assist stampers with their own research and development. Stampers don’t have the luxury of breaking into a production schedule to develop techniques on a production servo press. Pyper Tool, on the other hand, can contract time on the servo press so that a stamping customer can develop and hone its servo stamping expertise.

Servo Tryout a Logical Next Step

Bringing in a servo-driven press was not the idea Jeff Pyper, president of Pyper Tool, originally had in mind.
“We took a 450-ton mechanical tryout press out of service for repair,” recalls Pyper, “and as it was torn apart offsite the repair estimates escalated. At that time, our goal was to upgrade the press and add some speed, and also add a feed line. Given the high repair cost, we considered purchasing a used press, but the used-press market is tight, which impacted price.”

Pyper conducted research and found that servo-driven units comprised the majority of new presses currently sold in North America. That got him thinking.

“The future will see a need for tooling built for servo presses,” he says. “Today I see many stampers placing their traditionally built tools into servo presses, and making adjustments based on what the servo press can do. I thought a long-term strategy would be to have a servo press in our die shop so that we could perform research and development and come up with some new techniques, new construction and new ideas to leverage the capabilities of servo presses.”

With this plan, Pyper sought out Aida-America.

Ultimately, the company delivered its DSF-N2-3000 model, employing a proprietary high-torque, low-rpm servo motors to provide direct drive that offers the same stroke length and torque rating of a conventional mechanical press while allowing full torque at speeds as low as one stroke/min., according to Aida officials. In addition, capacitors storing power in the nonworking portion of the stroke reportedly enable power consumption less than that of a mechanical press.

The flexibility of servo technology in speed, dwell time, etc., enables all manner of opportunities for Pyper Tool to better serve its stamping customers and position itself as a leader in die design and build.

Down the road, Pyper hopes to assemble enough expertise to design tooling that specifically takes advantage of servo-press attributes. But in the meantime, the tool builder is using its new machinery to match the conditions that tooling will face in customers’ presses.

“My goal is to use this press to simulate the press rates provided in customer quotes,” Pyper explains. “Theoretically, given enough information on the presses a customer will be running the tools in, we can simulate the actual curves of the press. So we can accurately simulate the customer’s stamping experience and, hopefully, provide a better-running tool. This also helps minimize final tryout time in the customer’s press.”

Speed-matching capability is important, as tooling may behave differently at varying press speeds.

“Difficult to simulate are the dynamics occurring when you speed up some of these dies,” Pyper offers. “We may tryout tooling at 15 strokes/ min., but when our customer pushes it to 50 or 70 strokes/ min., different things start happening in regard to part ejection and timing. You just can’t see dynamics of the tool until you speed up the press.”

The new servo press reaches speeds of 70 strokes/ min. during tryouts at Pyper Tool. That speed, along with a press bed that measures 3650 mm left to right by 1500 mm front to back, encompasses the majority of customer speed and tool-size parameters. Pyper Tool also has incorporated a full package on the press to test die sensing installed on many of the dies.

With time, Pyper expects the servo press to lend greater assistance in designing and building tooling to form and trim aluminum, in concert with current experiments with tool coatings to prevent galling. In addition, as the newly installed feedline ramps up, Pyper Tool will be able to further expand its tryout expertise.

“With our feed line installed, we are beginning to determine how we can marry automation with servo-press technology,” Pyper says, noting that Aida-America is providing training to help accelerate that knowledge. “Perhaps instead of running a mechanical press for the full stroke, we only have to open up a servo press high enough to advance the material feed. We also perform automated welding and other automated processes here, and feel that we can integrate some of that with the servo press. We’ll be able to perform resistance welding and other secondary operations in the servo press because we can stop the ram at any point. The servo press also offers functionality for spotting and for analyzing. We can move the ram very slowly. As we perform tryouts and set the function of the tool, servo technology can be a tremendous aid. Overall, we’re looking to marry our automation capabilities with our diemaking capabilities.”

As it is, the addition of servo-press technology into the tool design and build process keeps Pyper’s mind churning and promises an exciting future.

“There’s been a learning curve for us regarding servo-press capabilities, and there will continue to be,” he offers. “It will be an ongoing effort for us and the industry to push what can be done with a servo press. When designing tools specifically for a servo press, perhaps you can use less tooling to take advantage of draw rates similar to those of a hydraulic press, followed by the quick return of a servo press. We can also experiment with press speed when piercing and trimming. I can’t speak at length about that yet, but that is where Pyper Tool is heading.” MF
Industry-Related Terms: Bed, Die, Draw, Form, Forming, Functionality, Hydraulic Press, Model, Piercing, Point, Ram, Stroke, Torque
View Glossary of Metalforming Terms


Huge Schuler Press the Heart of a Volkswagen Press-Shop Expa... 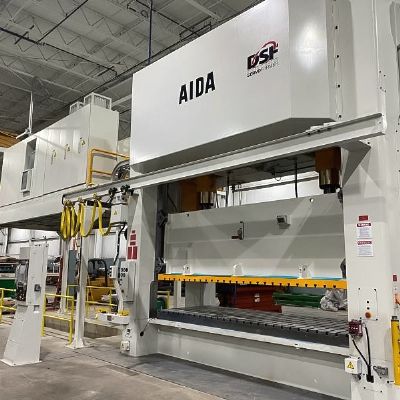 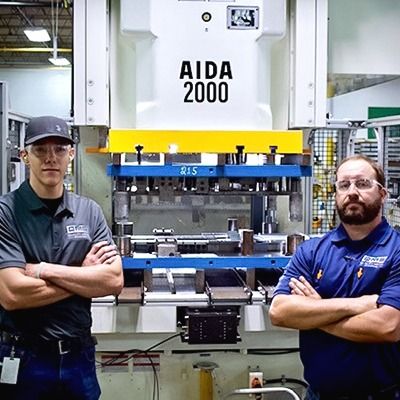