Heavy-metal stamping has taken on a whole new look at heavy-gauge stamping specialist Rockford Toolcraft, thanks to recent installation, end to end, of a pair of two-ram mechanical presses linked by a servo-based transfer system. Everything about the setup, dubbed Brutus by the company, screams of heavy metal—from the beefy coil line to the sturdy transfer system that moves stampings, as heavy as 50 lb., along four rams and 27-ft. of combined bed length. It’s all housed in a new 30,000-sq.-ft. building addition, with 42-ft. ceiling and 30-ft. pit.

We walked the line as it pounded out cross members for Class 8 truck frames, 50-lb. chassis parts stamped from 75-lb. blanks sheared from 5⁄16-in.-thick Grade 50 high-strength low-alloy (HSLA) steel. You can watch the heavy-metal stamping press crank out the parts by viewing my brief editorial video in our online Multimedia Center.

Rockford Toolcraft emerged in 1976 when tool and die maker Jerry Busse, still the family-owned firm’s president, invested $10,000 to build stamping dies. The firm grew rapidly through the ’70s and by the early ’80s had 20 employees. During the mid-’80s some of its customers encouraged Busse to purchase their production presses and stamp their parts. By the early ’90s, Rockford Toolcraft had fully leveraged the synergy of its tooling expertise and stamping equipment, to offer significant cost savings to its OEM customers.

“By the late ’90s,” Busse says, “our sales were increasing by $10 to $20 million per year. Then, to protect ourselves from overseas competition, we moved more and more into stamping of heavy-gauge parts, where there was less competition. We upsized the entire operation with higher-capacity presses, heavy-duty automation, increased crane capacity, etc.”

“Our growth in the ’90s was fueled primarily by two markets,” Busse says, “agricultural and trucking.” Today, those two markets represent half of the firm’s business. It also stamps and assembles for the automotive and commercial hardware industries, among others.

Als looking for opportunities to take his company—fearlessly—into uncharted territory, Busse first spied the two presses that have since become Brutus when touring one of his customer’s stamping facilities in 2003. The firm had been using the two twin-ram 2200-ton presses end to end to stamp a dedicated product line. When production quantities for the product line dwindled, the company sold the presses to Busse, who scrapped the transfer and feed systems, ordered new replacements and had the presses rebuil-new motors, clutches, bearings, etc. Added in 2007 were a new Series 900 servo-based transfer system from HMS, and a ½-in. by 60-in.-capacity feed line from Feed Lease Corp. (see article in MetalForming, June 2007, page 30).

“The beauty of running the presses end to end and four separate slides,” says Busse, “is that we can run the rams at different tonnage levels without having one ram affect the other. The tonnage required at each die station varies—with one big ram, unequal tonnage among the stations can cause the ram to tip, which causes premature press and tool wear.”

Stamping the Class 8 truck-chassis parts, 5⁄16-in.-thick steel feeds from 40,000-lb. coils. The first ram (1000-ton) powers a three-station progressive die that blanks and trims the HSLA steel. Then three single-hit stations under the remaining rams (1200-ton, 1200-ton and 1000-ton in sequence) punch holes, form and resize to remove springback. The tooling also must remove coil crown, as the straightener cannot remove the entire coil crown from the heavy stock.

Stamping Rules of Thumb Out the Window

“Many of the rules of stamping when you’re dealing with sheetmetal or even light-gauge plate go out the window when you’re working with 1⁄4-in. steel and thicker,” shares Busse, describing the learning curve his employees find themselves continuing to navigate. “We must als be on the lookout for different lubricants, tool coatings and tool steels. A lot of good tool steels do not hold up to the shock loads created with 5⁄16- or ½-in. steel. We’ve had to find tool steels to absorb the shock, and in some cases have found new life for older steels—S7 and S5 high-toughness shock-resistant alloys for example. We’re also evaluating lubricants that we can use in sparse applications, precisely applied to specific areas of stampings to minimize waste and cleanup costs. The lubes obviously must work well under high heat and pressure applications.”

Other techniques developed by the firm include the use of severe shear angles on punch tooling, in addition to staggering the punches in sequence, to reduce tonnage requirements on HSLA-steel stampings. Busse showed me one job where punches had a 15-deg. shear angle.

On the horizon for Rockford Toolcraft, in addition to continued growth in the agricultural and truck markets, are heavy-gauge stampings for the railroad industry. The firm stamps ¼- to 3⁄8-in.-thick hinges, brackets and other parts for rail cars.

“We expect the railcar industry to be a hot market for a number of years,” Busse predicts. MF 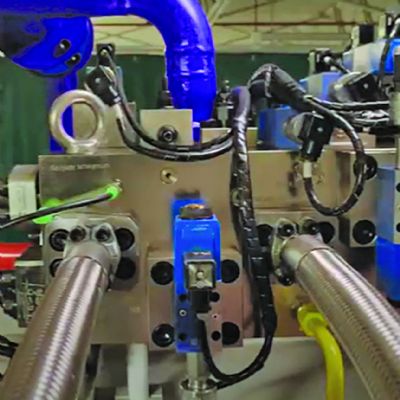