can cause excessive material shrinkage at the weld nugget. When weld appearance counts, as it often does, this means operators have to go back and fill in the craters created due to shrinkage. After the Bondo comes grinding and sanding to smooth the area. End result: extra hours of wasted labor that fail to add value and instead just shrink the bottom line.

At the Custom Products Division of Chief Industries, in Grand Island, NE, an aging multi-gun resistance-spot-welding (RSW) machine was causing just that scenario: huge power requirements for welding, and hours upon hours of post-weld finishing. The division manufactures hollow-metal prison doors, wall panels and other products for the correctional industry and, yes—appearance does count, even in prisons. Resistance-welding hat-section stiffeners to sheetmetal doors and wall panels on its 20+-yr.-old machine resulted in welds that “were so hot,” says Chief Industries maintenance supervisor Bill Peters, “that each weld caused a huge divot. We needed something better, to improve weld quality as well as increase speed and throughput.”

Something better came late in 2008 with the arrival of a new custom-designed and built RSW machine from T.J. Snow Co., Chattanooga, TN. Among its design enhancements is the use of push-pull circuitry rather than the series-style circuit previously employed, as well as automation features to improve throughput by as much as 20 percent.

Wall panels and doors comprise 12-gauge galvanneal panels 2 to 4 ft. wide. The machine joins a series of rolled hat-section stiffeners, of 16-gauge cold-rolled steel, to the panels in several rows spaced 6 to 12 in. apart. Resistance welds are placed every 3 in. along the stiffener flanges.

The new machine mounts 16 pneumatically operated weld cylinders and weld guns to a machined dovetail slide to the upper crown; guns can be independently positioned along the length of the crown to accommodate custom weld patterns. Lower tooling comprises 16 high-pressure platen-mounted electrode holders. A toggle table lowers the tooling to allow indexing of the panel assemblies, between weld sequences, to avoid dragging the material across the top of the electrodes.

“That’s just one advantage we gain from the new machine,” says Peters, noting that premature electrode wear from the previous machine led to excessive weld-tip dressing, and caused unplanned downtime. Now, once a set of 16 welds has been completed and the toggle table drops to move the electrodes a from the material, the assembly shifts by of two gauge bars, one on each side of the machine.

Since order size for each door can be as little as one or two, setups change frequently and automating the gauge-bar setup was a key machine specification, adds Peters, allowing speed and throughput to climb. To manufacture wall panels—which the firm hopes to move into in a big by virtue of the improved productivity and quality it’s enjoying with the new machine—typical order size is 12 panels/cell.

To run the machine, an operator loads a pre-tacked panel onto the machine and positions it against the left-hand gauge-bar assembly and underneath a series of laser-dot indicators. These indicators help the operator align the material to ensure proper weld placement along the stiffener flanges.

The operator then initiates the weld sequence. The right-hand gauge bar extends and forces the panel against the opposing gauge bar. With the panel locked into weld position, the toggle table extends to bring the 16 lower electrodes up. The upper welding guns

then extend downward and the first series of 16 welds are completed. The guns retract, the toggle table drops, the gauge bars shift the panel and the sequence repeats.

The setup uses 1.25-in.-dia. zirconium-copper electrodes (preferred for welding galvanneal and other coated materials, to avoid electrode sticking)—Tuffaloy TA-25CZ male caps on top and a flat-face lower electrode. Reduced weld heat and power, combined with the ability of the toggle table to prevent electrode marring during indexing of the assembly, have improved electrode life between dressings by 20 percent, says Peters.

Turn Down the Power

“We really had to crank up the power to pull the nuggets and form the spot welds,” says Peters. “This created quite a divot at each weld location. Now, the push-pull setup provides better weld control and nicer-looking nuggets, with much less heat input, so the resulting divots are barely visible.

“Yes, we have twice as many transformers as we used to, but the payback is definitely there,” Peters adds. “Weld quality is improved, overall power consumption is down, and we have practically eliminated the added, wasteful process of filling each weld divot with Bondo and then grinding and polishing each repair.” MF 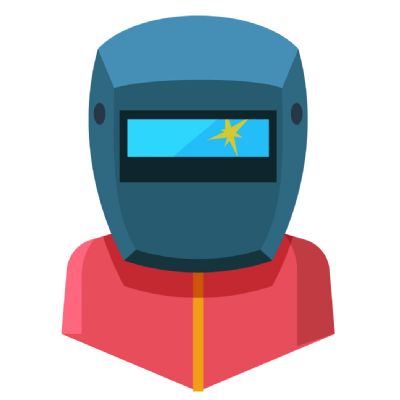 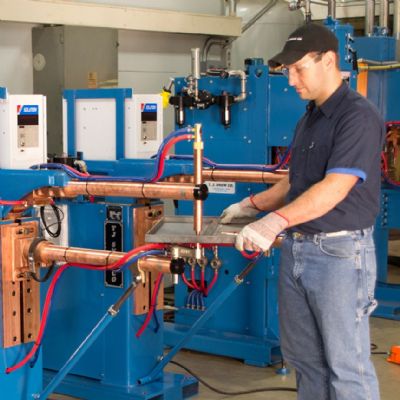