Chris Richards, director of engineering at Wellington Industries, Belleville, MI, calls the company a ‘go-to’ stamper for side sills, A and B pillars, reinforcements and more,” noting how much takeover work that has landed at the company in recent years. The shift began during the automotive downturn, and continues today through the industry’s recovery.

But more significant to the growth of the company—over the last few years and projected on for the next several years—is Wellington’s expansion beyond just, as Richards says, being a “hit-and-ship stamper,” and becoming a go-to source for welded automotive assemblies. To be more precise, it’s supplying welded front-end modules and bumper assemblies to OEMs as well as to Tier One suppliers. That move started in 2010-2011.

“They (the Tier One companies) brought the design intelligence to the table, and we developed the manufacturing IQ needed to engineer, stamp and assemble new front-end modules,” says Richards. We’re talking supporting production of the higher-volume models.

Wellington operates out of a pair of side-by-side facilities in Belleville—its original 150,000-sq.-ft. stamping plant outfitted with 15 big-bed mechanical presses, and a neighboring 100,000-sq.-ft. assembly facility the firm took over in 2010. This facility is home to eight robotic-welding cells. It’s this more recently inhabited assembly plant that “represents the new look of the company,” Richards says.

The firm’s foray into high-volume assembly dates back to 2010 when, responding to a request from a Tier One supplier, it took over front-end module assembly for a popular model. To meet the required just-in-time next-day delivery requirements, Wellington installed a robotic-welding cell within an e-coating facility.

“This reduced the number of containers required from 300 to 100,” says Richards, “allowing us to be extremely competitive on the project while expediting shipments and streamlining the production/delivery process.”

Next, late in 2011, came another burgeoning program for another Tier One supplier, a takeover job that proved a perfect fit for Wellington’s goal to become a prime source for front-end modules.

“When we gained that second front-end-module program,” says Richards, “we partnered with ABB Robotics to help us develop new robotic-welding cells rather than rely on the existing equipment used by the original supplier. We’d had previous experience with ABB on a robotic laser-trimming line working with hot-stamped roof side rails, and that gave us the confidence to use them for our first big inhouse robotic-welding project. And the rest, as they say, is history.”

A Stampede of Robotic-Welding Work

“We work to modify tolerances to best navigate process variances,” he says. “This means that in the pressroom, we have to learn to design the stamped parts to accommodate the distortion, or drift, we experience during arc welding.”

In addition to predicting (using simulation software) and adapting its metalforming processes to accommodate the heat input from arc welding, Wellington also has adopted the MIG-brazing process on certain assemblies. This process promises to deliver significantly less heat input than does traditional gas-metal-arc welding. MIG brazing, using power supplies from Fronius, employs a copper-based filler wire with a relatively low fusion temperature—typically 1600 to 2000 F—and weld current typically in the 40- to 130-A range. The relatively low process temperature—no fusion of the base material takes place—generates several benefits, including minimum distortion, less zinc vaporization and fume generation, and reduced or, in some cases, eliminated weld spatter.

At the entry end of the robotic-welding cell, a turntable positioner indexes 180 deg. to swing the fixtured components within reach of a pair of spot-welding robots. These perform what amount to tack welds to hold the parts within their tight dimensional tolerances for the remaining dozens of spot welds made throughout the cell. Following this quick blast of resistance tack welds, the assemblies move to idle stations where material-handling robots swing in, pick up the subassemblies and move them through a series of stationary weld stations. This finely tuned ballet of robotic motion yields completed bumpers at a rate of more than 100/hr.

Specified equipment for the newest of Wellington’s robotic-welding cells: ABB newest models of large robots, IRB 6700 models rated to 235-kg maximum payload and boasting a reach of 2.65 m. ABB describes the seventh-generation robots as offering a 15-percent decrease in power consumption compared to previous models, along with a 20-percent reduction in total cost of ownership, double the time between service intervals and an average increase in speed/shortened cycle times of 5 percent.

“When we put the cell in, it immediately went into production,” says Richards. “We had zero learning curve, and thanks to ABB’s offline process simulation we immediately took off at 60 completed assemblies/hr. Within a few weeks, by further optimizing robot motion paths and speed/acceleration parameters, we ramped up to 100/hr., or more.”

Contributing mightily to this dramatic productivity gain is the integration, via the ABB robotic controls, amongst the robots, weld stations and positioner. “There’s a great deal of integration and electronic communication throughout the cell,” Richards says, “that allow the robots to work extremely close to one another, and to move in and around and the cell with minimal hesitation or distance between cell components. This lets us confidently and safely run the robots more quickly and without hesitation.”

Part of the success of this safe yet speedy cell operation must be due to a couple of key features inherent to the robot controller (ABB’s IRC5): QuickMove and SafeMove. The QuickMove feature optimizes motion control based on the complete dynamic model of the robot that resides within the robot controller. QuickMove optimizes acceleration to enable the robot to reach its programmed positions in the shortest possible time, in turn optimizing cycle times beyond applications that depend solely on robot-axis speed.

In addition, the IRC5 robot controller features the ABB TrueMove function designed to ensure that the robot follows the prescribed motion path regardless of its speed.

Resistance welding galvanized steel, and certainly aluminized hot-stamped material, requires a high level of welding expertise, and Richards has two welding engineers on staff to ensure sound weld-procedure development. “And we use ABB as a resource as well,” Richards says. “For example, we’re working hard at perfecting our non-expulsion process parameters (including industry-recognized solutions such as pulsed welding and heat-energy slope control) in our resistance-welding operations, and ABB has helped a great deal here. As part of this process, we’re performing much more tip dressing than we used to. Along with perfecting our weld procedures, this has greatly reduced expulsion and resulted in reduced maintenance and cleanup costs, while extending tip life.”

Along with the emphasis on eliminating weld expulsion, Wellington has begun to focus on avoiding cold welds. Here, again with ABB’s help, it has been installing poka-yoke devices to check weld current after each tip dressing. The robots bring their weld tips over to these current-check stations where they send current through a puck, or blank, of steel.

“Before we implemented the poka-yoke current checks,” shares Richards, “periodically a cold weld or two during a shift would require us to inspect an entire shift’s worth of assemblies. On the welding cells where we’ve added the poka-yokes, we’ve completely eliminated cold welds. And, we’ve been able to, with the increased confidence in our process, reduce the frequency of weld testing by 15 to 20 percent.”

Yet another resistance-welding productivity boost came in 2010 when the firm began to switch from pneumatic welding guns to servo guns. “The servo guns are very accurate, and the welding process becomes much more repeatable,” Richards explains. “With pneumatic guns the list of process variables impacting weld quality and consistency is long, including ambient air temperature and humidity, and the quality of the air coming from the compressor. In many cases we would have to over-pressurize the pneumatic guns to make up for process variables. 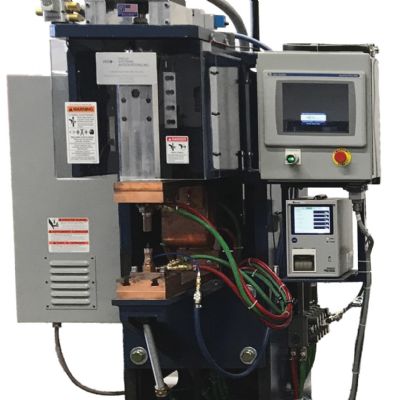 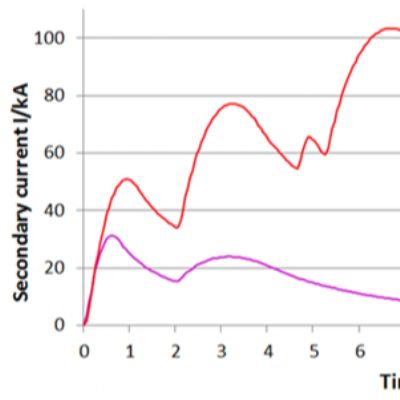