Get Ready for IMTS 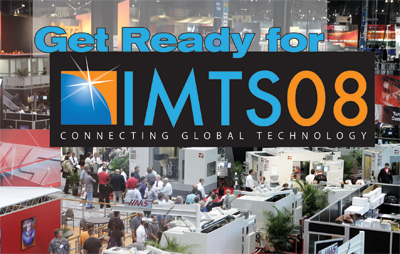 AMT-The Association For Manufacturing Technology takes over McCormick Place in Chicago September 8-13 for the 27th edition of the International Manufacturing Technology Show (IMTS). More than 1200 exhibitors will occupy 1.2 million sq. ft. of space for the six-day event, which is expected to attract more than 91,000 manufacturing industry professionals from 120 countries. Attendees can expect to find more than 15,000 new machine tools, controls, computers, software, components, systems and processes designed to improve manufacturing efficiency, and gain valuable ideas and insights from equipment producers.

Ramp Up for More Work

IMTS 2008 comes at a most interesting time for North American tool and die shops and other users of machine tools. Rising costs for fuel, labor, etc. have eaten considerably into the “China price advantage” and will “radically transform the people look at the geography of their manufacturing,” reports Richard Sinkin, a consultant quoted in an article, Can the U.S. Bring Jobs Back from China?, recently appearing at BusinessWeek.com.

As it stands, U.S. manufacturers, thanks to productivity improvements and a weak dollar as well as rapidly rising transportation costs, have narrowed the cost gap with overseas competitors and some work may be returning.

“If global shipping costs continue to rise, some businesses could eventually move their factories back to the United States,” reads the article. “For the past decade, U.S. manufacturing productivity growth has averaged 4.8 percent… impressive for an industrialized nation, and bodes well for U.S. industry when the economy recovers.”

Industry numbers back up the theory of work returning to the United States. In their latest survey, AMT and the American Machine Tool Distributors’ Association report that U.S. manufacturing technology consumption rose 29.2 percent in April 2008 as compared to April 2007, giving a year-to-date total of $1,587.3 million, up 19.9 percent over 2007.

Recognizing the opportunity, manufacturers are looking to update their shops and IMTS 2008 and its vast array of new products provides the ideal venue to do so. Easing IMTS navigation, the exhibit floor is arranged in the following pavilions: Metal Forming & Fabricating/Lasers; EDM; Abrasive Machining/Sawing/Finishing; Controls & CAD/CAM; Gear Generation; Machine Components/Cleaning/Environmental; Metal Cutting; Quality Assurance; and Tooling and Workholding Systems.

IMTS 2008 also presents the Manufacturing Business and Technology Forum, Where Technology and Business Connect. The forum brings together industry experts to provide useful and up-to-date technical information. Programs will be presented by five partners: AMT, the Society of Manufacturing Engineers, the Center for Automotive Research, the American Society for Precision Engineering, MTConnect, Tooling U and the National Tooling & Machining Association.

An IMTS staple, The Emerging Technology Center, in addition to having university and research laboratories exhibit research and development efforts in science-based manufacturing, will showcase MTConnect, a new communication protocol standard for passing data between devices, equipment and higher-level applications.