Designing a progressive die always involves cost pressure to produce the part with a minimal number of die stations. On the surface, this seems logical because a die with more stations requires a longer die set, more tool steel, more machining and additional assembly time. However, the costs associated with an additional die station can pale in comparison with unrelenting downtime, scrap and effort required to keep a marginally performing process running over its lifetime. 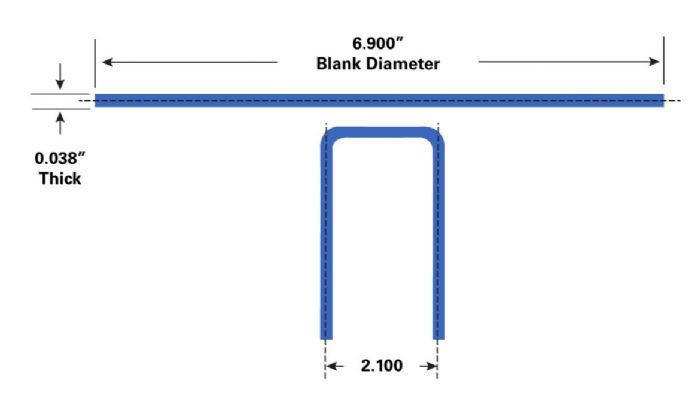 A primary cause for deep drawing failures in progressive dies: One or more draw reductions exceed the allowable percentage that the blank, or previously drawn shell, can be reduced without splitting. This allowable percentage varies with sheetmetal thickness. For example, for a deep-drawing-quality steel blank, the percentage of reduction for the first drawn-shell diameter varies from 32 percent for 0.015-in.-thick material to 48 percent for 0.125-in.-thick material.

Draw-reduction tables provide recommended maximums, assuming that ideal process conditions exist in regard to material properties, blankholder pressure, lubrication conditions, drawing speeds, etc. Larger reductions, though possible, may cost more money over the life of the die to control and manage the process variables than would the additional costs be for adding more die stations.

When an additional draw station is required, avoid very small reductions. Instead, balance the draw-reduction ratios through all of the die stations. The balanced reductions would be 41, 23, 21 and 15.3 percent for the process shown in Fig. 2.

This approach not only balances the reduction ratios, but also reduces draw severity in the first three stations, making the process less sensitive to input variables. This also illustrates an important point: Taking the maximum blank reduction does not reduce the number of intermediate draws. 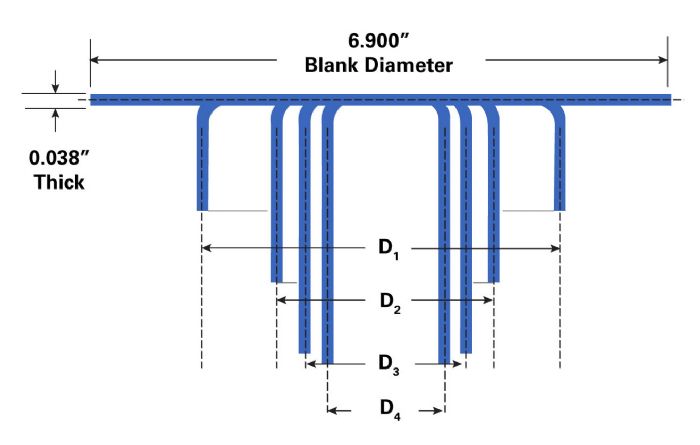 Another common problem involves the size of the punch-nose and die-entry radii. A tendency exists to make the radius too small, as making the radius larger during die tryout proves easier than trying to make it smaller. But doing so places needless stress into the cup, resulting in excessive thinning or fracturing. The problems associated with improper reduction percentage or improper die radius in the first draw station may not show up in that station, but in a later redraw station, leading to considerable time spent trying to fix the wrong station.

Stock carriers should be designed within the stock width and pitch required for the blank. Otherwise, additional material must be allocated for the coil-stock width or the progression to accommodate the carrier. For good cutting, a minimum carrier width should not measure less than two times the material thickness. A typical carrier width for medium-sized dies requiring carriers that must flex may measure 1⁄8 to 1⁄4 in. wide. Large dies may require wider carriers to push the coil stock through the die.

When using two carriers, keep their lengths as consistent as possible to balance any movement of the strip. Consistent carrier lengths help prevent twisting of parts and distortion of the carrier strip. Use a natural attachment point on the part that allows for easy cutoff at the end of the die.
If the action of the die requires the carriers to stretch or flex, design the carrier with loops that measure long enough to stretch or flex without breaking. The resulting carrier must be strong enough to feed all of the parts along their full progression. If two flex carriers prove too weak, consider designing the die with three. MF 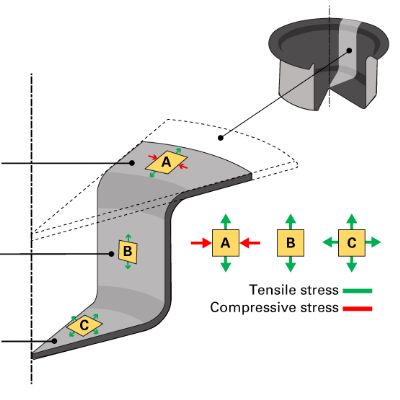