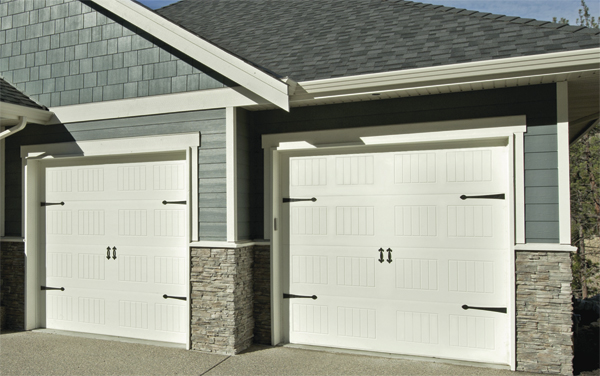 The 325,000-sq.-ft. production facility of Steel-Craft Door Products, in Edmonton, Alberta, Canada, fabricates overhead garage doors along a pair of 300-ft.-long coil-fed continuous-flow lines. The lines—one geared toward production of residential garage doors and the other for commercial buildings—simultaneously feed prepainted galvanized steel from a pair of 10,000-lb. coils as wide as 36 in. The stock from the two coils, 0.017 to 0.025 in. thick, feed parallel along the line and undergo forming operations, then come together near the end of the line where they’re clinched together sandwiching a layer of insulating polyurethane foam. The assembly then feeds through a curing tunnel and to a cutoff saw to be cut to length.

Among the forming operations used to add strength and style to the garage-door panels are roll embossing, rollforming and stamping. For several years Steel-Craft offered three basic styles of doors, requiring three different die sets for its in-line press—a hydromechanical model with 30- by 55-in. bed. In 2009, to meet market demand for more styles, the company introduced two new styles and built an additional two die sets to accommodate. At the same time, it faced increased pressure to shorten production runs and change out the die sets more frequently.

“Excessive changeover time on the presses as well as growth in orders suddenly meant we either had to add a third production line, run a lot of overtime or add a weekend shift,” recalls project and building manager James Van Domselaar, “none of which seemed appealing. And neither did turning a orders,” he adds.

Instead, the firm focused on reducing changeover times to increase production capacity from its existing lines. It found success by investing in quick-die-change systems that took die-change times from more than 2 hr. (from last part to first part) to less than 30 min.

In addition to the continuous panel lines, the plant also features 14 stamping presses in various sizes and styles to produce hardware components, spring mechanisms, track, etc. “But,” notes Van Domselaar, “the panel lines are the potential bottlenecks. Uptime is critical.”

Changing out the 7000-lb. die sets used to stamp decorative features on the outer door panel once required three or four operators. “We had an efficient process in place, albeit slow and tedious,” admits Van Domselaar, noting that it staged dies near the presses to streamline the process as much as possible.

Faced with changing out dies as often as three times per 12-hr. work day, 2-hr. die changes just didn’t cut it, so Van Domselaar and his crew sought a better . In mid-2010 it purchased a Power Pallet quick-die-change setup from Pacesetter Systems, Valencia, CA. The pallet attaches to a die and enables quick, easy attachment to a forklift. To set the die on the press, the pallet docks to the bolster and with a push of a button indexes the die into place on the press bed. A v-block mounts on the back of the die shoe and guides the die left-to-right and front-to-back around a 1-in.-dia. pin installed in the bolster to ensure accurate alignment.

In addition to the Power Pallet (which earned a Most Innovative Product Award at the METALFORM 2007 trade show in Chicago), Steel-Craft also invested in quarter-turn quick clamps from Pacesetter. All told, the investment paid for itself in 6 months, “since we can run the lines for an additional 90 min. per die change,” says Van Domselaar. In addition, changing dies with the Power Pallet reduces manpower required from three or four operators to just two.

“When we looked at engineering and building a racking system,” he says, “we calculated the costs as being similar to simply purchasing a Power Pallet for each die. So, we decided to purchase a total of five Power Pallets, one for each die. In addition, we standardized all of our die subplates.”

To enable the addition of the Power Pallets to its process, Steel-Craft positioned a stand in front of each press level with the bolster. Using a forklift, a die with the Power Pallet attached is positioned on the stand and then, with the turn of a key and press of a button, is indexed via a ballscrew-driven mechanism into the press. The die rides on a cushion of air. As the line runs and the press does its thing, the Power Pallet awaits its next assignment—removal of the die—until the production run ends.

At the end of the run the die exits the press back onto the Power Pallet, and the setup is moved via forklift back to the die storage area. The forklift driver then picks up the next required die and Power Pallet and repeats the process—in as little as 15 min. 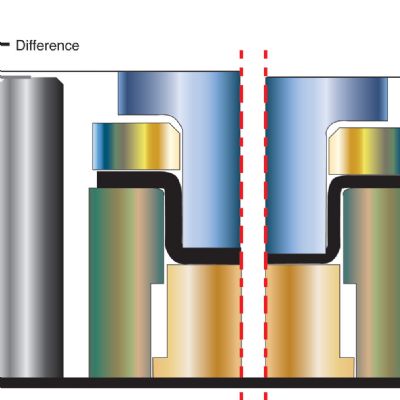 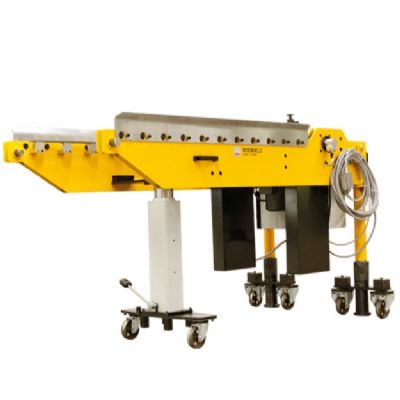 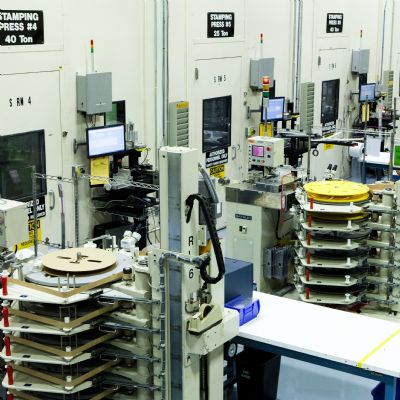 
QDC Squeezes Every Drop of Productivity