More than a decade after they debuted in North America, servo presses have entrenched themselves and have increasingly populated the metalforming landscape, owing to their unique capabilities and flexibility. There aren’t too many metalformers that are not actively looking for s to incorporate this technology on the pressroom floor, in various applications and in an economically prudent manner.

MetalForming surveyed manufacturers of servo presses to learn what’s out there, what’s new and where servo presses make the most sense. By offering various drive options, servo presses offer more flexibility than ever. With such flexibility, metalformers are tasked with determining exactly how the technology can provide benefits in specific applications. As the learning curve is flattened, the technology will open new doors to creating better parts more efficiently, using tooling made specifically to take advantage of what servo presses offer.

Flexibility is the calling card for servo presses. Press manufacturer Stamtec, Inc. takes that flexibility a step further with two types of drive systems: direct, rolled out by the company about 5 yr. ago and with a new generation coming online now; and link-assisted, on the market for the past 3 yr.

In general, any servo press replaces the standard motors, flywheels and clutch/brakes found in traditional mechanical presses with servo motors, providing full working energy at any speed. Although, like any mechanical press, which at heart, servo-driven presses still are, it won’t provide its full rated tonnage throughout the entire stroke length. The payoff is flexibility in slide-motion profiles and, consequently, flexibility in applications. Servo presses can perform primary operations such as blanking, drawing, restriking and even warm forming, as well as secondary processes such as drilling, tapping and staking.

Direct-drive presses provide a shorter stroke length if needed, in pendulum motion, according to Lee Ellard, Stamtec national sales manager. A 12-in.-stroke press with direct drive can run a 2-in. stroke if need be, making it effective for progressive-die applications, for example. Other advantages include a higher torque off bottom dead center (BDC) than a comparable link-assisted servo press.

An economical alternative to the direct-drive presses are Stamtec’s link-assisted servo presses, which employ standard servo motors. A link or toggle mechanism couples with the motors to provide servo advantages while conserving energy. Less costly and more readily available servo motors augment the mechanical link drive to provide servo capabilities such as slide-speed adjustment, dwelling and bumping and reversing, though once BDC is reached, a link-assisted drive must complete the full stroke length without reversing. So, link-assisted presses won’t provide varied stroke lengths/ pendulum motion, and provide less torque and energy at rating points as compared to direct-drive units.

“Many applications involve more exotic materials that are difficult to form and require dwelling or restriking,” says Ellard, citing an example where servo presses shine. “For a die with a form in it, a servo press can slow down the slide speed through that form and dwell so that the material flows more effectively and sets. With a traditional mechanical press, your slide-motion profile cannot be changed during the press cycle. So, a form that requires a slower slide velocity means that the press must run the entire cycle at that slower speed.

“Servo presses allow increased speed to the point of the form and after, with a slow speed and/or dwell through the form,” Ellard continues. “The result is improved forming and increased productivity.”

Drawing, high-tensile-strength stamping and blanking all offer opportunities for improvement via servo-press technology. But the decision is not so clear cut, according to Jim Schulte, general manager of sales and administration at Nidec Minster Corp., Minster, OH.

“Suppose that in a specific application the use of a servo press can minimize impact forces and the subsequent snapthrough forces, by slowing down the ram at the point where the punch contacts the material,” he explains. “That is a benefit. But the tradeoff might be that the time consumed during the working part of the stroke results in less net output, because a stamper can’t feed the part as quickly due to a slowdown in the ram speed.”

In these cases, an integrated servo solution may be the answer. Or, perhaps a traditional mechanical press is the safest and most economical route. There are other factors to consider as well.

“Servo-driven presses are more complex than mechanical presses,” Schulte says. “You have the servo motor and you have eliminated some of the mechanical components, but on the other hand you have a much more sophisticated electrical control system that routes more of your investment dollars into the controls and less into the mechanical systems. So you have to be prepared to support that.”

But as Nidec-Minster and others continue to offer updated servo technology, metalformers will continue seeking servo solutions.

With that in mind, Nidec Minster has been developing servo-press technology for several years. The company installed its first servo-driven press about three years ago, a P2H-FX model. That line offers capacities of 63, 100 and 160 tons and provides high speed —upwards of 250 strokes/min. One recent installation of this press points out the capabilities and potential benefits of servo technology and integrated systems in general.

“We installed a complete press system, with material feed intricately timed to slide position,” explains Schulte. “At a critical point in the operation, a form required the press to run at a speed of 80 strokes/min. Outside of that point, it accelerated to 250 strokes/min., providing a net speed of about 140 strokes/min. A mechanical press would have to run the entire cycle at 80 strokes/min. to correctly form the part. So, by using a servo press for this application, productivity has been nearly doubled. When you time all of the auxiliary equipment, such as a servo feed, servo transfer and other automation, the ability to manipulate slide position and ram speed provides opportunities for productivity increases.”

Since introducing the P2H-FX, Nidec Minster has come out with its FX2 line of servo-driven straightside models in capacities to 1200 tons, built on the Nidec Minster HeviStamper platform. Servo motors powering the twin end drives of these presses feature liquid cooling. Reported advantages of this technology, according to company officials, include cooler operating temperature and less heat transfer to the press, resulting in longer motor life and a more stable production environment. As a closed system, it reduces contaminant infiltration as compared to open and air-cooled systems. The motors tie to an energy-management system designed to optimize energy usage during production.

Other features include a hand-wheel setup mode, allowing users to precisely position the slide during setup and die tryout. Minster’s Production Management Control programming provides simplified integration with coil-line components, and a user-friendly operator interface consistent with mechanical-press offerings, increasing productivity by reducing training requirements. Innovations such as these in servo presses force metalformers to dig deep in examining applications for their use as compared to tradition mechanical presses, explains Schulte.

“The technology is application-specific and has great opportunity in unique applications,” he says. “Historically, stampers would label themselves as progressive- or transfer-die stampers, but servo-drive presses provide more flexibility. This increased flexibility provides opportunities to broaden markets or create optimized solutions in specific applications. Running a job at 140 strokes/min. versus 80 is a big deal. Overall, metalformers look at what they do uniquely, and search for a solution. Servo technology can be that solution.”

So Much More to Servo

Servo presses have huge untapped potential in North America. Metalformers are traveling the learning curve, as are die designers and builders as well as part designers, specifiers and OEMs.

“In North America, we are using servo in a limited ,” says Randy Kish, regional sales manager for Seyi America, Inc. “Popular uses include heavy blanking—often with advanced-high-strength and dual-phase steels—and essentially creating a high-performance link-motion profile and operating in a pendulum mode. This allows for slowing on the down stroke with a pendulum motion negating the need for a full-stroke cycle. The result is a 20 to 30 percent increase in productivity.”

Such gains are impressive, but so much more is possible with a servo press. Toward that end, Seyi has assembled a servo-forming team, including tooling expertise, to help metalformers tap the technology’s potential. The company can assess customer part drawings to determine efficiencies via better application of a servo press. The team also works with tool designers and builders.

Seyi conducts testing to demonstrate more sophisticated approaches to forming via servo presses. One operation obtained through this process creates a bevel-like edge on a female part that mates perfectly with the male part, with no secondary operations required.

Precision and productivity in forming via servo requires special attention to press design and build, according to Kish. With that in mind, Seyi has focused on the drive, electrical system and press construction in its offerings, which include unitized straightside units in capacities to 600 tons, and tie-rod straightside units to 1200 tons.


The company uses its own proprietary high-torque, low-rpm, air-cooled motor for direct-drive transmissions.

With many users hooking in accessories to form a press system for continuous automated stamping, the electrical system in general, and the encoder specifically, must mesh. The encoder should connect easily and connections should be accessible and convenient, according to Kish. And the controller should provide programmability in order to set parameters and motion to match the servo profile of the system. As a result of attention to these components, timing switches can be programmed precisely with peripheral equipment, ensuring optimal performance, says Kish. 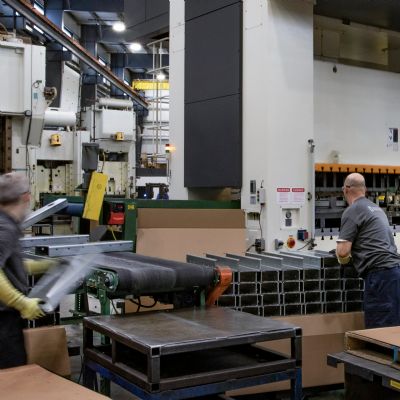