The Morality of Manufacturing


The passion and dedication that Gretchen Zierick, the Precision Metalforming Association’s (PMA) chair-elect for 2010, brings to her family-owned metalforming company now will be felt by the entire industry, as she takes the reins of PMA. She’s eager to share her ideas, wisdom and enthusiasm from the association’s seat at the head of the PMA table. Gretchen has served as president of electronics-industry supplier Zierick Manufacturing, Mount Kisco, NY, for the last 10 years; the company has been a PMA member since 1985.

“I love the metalforming processes work and making sure that they work correctly, knowing that we’re doing things correctly,” Zierick says when asked from where she gets her passion and drive that has kept her company at the front of the pack of electronics-components suppliers. “At Zierick Manufacturing, we have an R & D team that works to understand customer and industry problems and then develops unique patented products.” For the next year, Zierick will work o instill that philosophy at PMA, one of new ideas and new opportunities. All the while, she urges all who work in our industry to unite in support of her theme for the year: The Morality of Manufacturing.

Manufacturers March to a Moral Code

“There is a moral code among manufacturers in this country,” Zierick says, beginning to explain the thoughts behind her carefully crafted theme, “based on the honesty and integrity that permeates our industry. In manufacturing we can’t get a with the lying, stealing and cheating we’ve seen in the banking, financial services and other industries. Manufacturers take raw materials and convert them into finished products that customers can test, see and feel, to prove their worth. To develop these products, you need an idea and an understanding of how to make it work. This to me is a moral endeavor, yet our industry often gets treated like the ‘bad guy’ by the media and by our politicians.”

What is it that manufacturing companies do right? Zierick reminds us that those who work in manufacturing use their minds to create products from ideas, all in the context of earning enough profit to support their employees and drive the economy.

“America once stood for entrepreneurship, capitalism and freedom, but now we’re being punished for doing what’s right,” Zierick says. “Manufacturing is the most moral to make a living yet we’re treated as the greedy bad guy. Let’s eliminate some of the regulations and mandates that tie our hands and allow the free markets to decide the value of our services and products. We earn our wages and profits, while it seems that so many out there do not.”

Strengthening the Foothold in Washington, D.C.

Zierick’s theme dovetails well to PMA’s long-term commitment to lobbying our nation’s politicians, to make them understand the impact that their legislation has on our industry and its ability to compete in the global market. Manufacturing creates wealth and jobs, and PMA supports legislators that understand these principles as proven by their support of pro-manufacturing policies.

As part of her theme, Zierick urges all that work in manufacturing to follow PMA’s lead and support those politicians that support policies that encourage the growth of America’s small- to medium-sized manufacturing companies, by eliminating barriers to profitability.

“I want the leaders in our industry to think as individuals about their own philosophies and values and to start evaluating the system of beliefs of our politicians,” Zierick stresses. “Too many people react emotionally to the issues, rather than practically and morally, which can lead to a contradiction in beliefs. And, I see too many people tripping over these contradictions, which is why our system is falling apart. Politicians often act irrationally, but as an industry we can present rational arguments that give us a better chance of enlightening them to the importance of manufacturing to America’s future.”

Advocacy on behalf of pro-manufacturing legislation is near and dear to Zierick, whose own personal involvement in lobbying traces back to the early 1990s and an opportunity to testify before Congress on the Clean Air Act. “After that experience in Washington, I looked for opportunities to get more involved in advocacy, and volunteered to participate on the PMA Government Relations committee,” Zierick offers, “and have served on that committee ever since.”

During her term as PMA Chair and beyond, Zierick expects PMA’s advocacy efforts to help ensure that government actions do not put manufacturers at a further competitive disadvantage. Of immediate concern: burdensome tax hikes, labor-law reform and cap-and-trade legislation.

PMA, thanks to its ongoing and developing One Voice advocacy program in partnership with the National Tooling and Machining Association (NTMA), will continue to work tirelessly on Capitol Hill. One example of the two associations working together toward a common goal was the first annual One Voice Legislative Conference, attended by nearly 100 NTMA and PMA members (including Zierick) in Washington, D.C. on May 12-13, 2009. Participants heard presentations from several members of Congress, and then spent a full day on Capitol Hill lobbying more than 100 congressional offices on a variety of issues, including cap and trade, card check, taxes, health care, currency manipulation, the auto industry and workforce training.

In addition to advocacy, Zierick also believes PMA, through the PMA Educational Foundation (PMAEF) offers the industry a powerful platform from which it meets the continuing and evolving educational needs of our industry. A 7-yr. member of the PMAEF board of trustees and past chair, Zierick helped the foundation create PMA University in 2007, near the end of her 2-yr. term as chair. And, she testifies as to the value of some of the foundation’s training tools.

“Our favorite  training tool from PMAEF is the video-based series called Economics…Making Dollars & Sense,” Zierick says. This set of three lessons is designed for existing and new employees in metalforming plants to help them understand the economic choices involved in the operation of their company, and the role of the employees in making those choices.

PMA University started as a package of training and education resources and has grown larger with new Internet-based opportunities. This year, PMAEF rolled out a new Technical Training Library consisting of webinars and a series of PowerPoint presentations on traditional seminar topics.

“Our company participates in nearly every PMA webinar,” says Zierick, “and we typically have a group of people interested in each topic, so the programs have proved to be extremely cost-effective.

“We also participate in the Educational Foundation’s annual Best Practices Workshops,” Zierick continues. “These workshops feature PMA district leaders and their local educators coming together to share what they are doing locally to meet the training needs of metalforming companies.

“Looking ahead to 2010,” Zierick adds, “PMAEF will continue to develop curriculum and training tools for stamping and tool and die competency-based apprenticeships, following guidelines developed by the National Institute for Metalworking Skills (NIMS); provide extended learning opportunities through PMA’s educational conferences at its tradeshows in the United States and in Mexico, as well as through seminars and webinars; expand our Technical Training Library catalogue; hold a new Marketing and Sales Conference, scheduled for next fall; continue to build relationships with other like-minded organizations; and look for new opportunities to be the primary provider of metalforming-industry workforce-development solutions.”

Zierick credits the many supporters of the Educational Foundation that allow it to continue to serve the industry at such a high level. “All of the services and products developed by PMAEF result from the generosity and support it receives from the industry it serves,” she says. “Many individuals and companies have stepped up as endowment contributors, annual partners, grant-fund donors or fundraising-event sponsors. Continued industry support of the Educational Foundation will play a key role in preserving the future of our industry.” MF


Seyi Installs a Pair of Presses at PPE Manufacturer Paulson ...


Change of Management at Siempelkamp 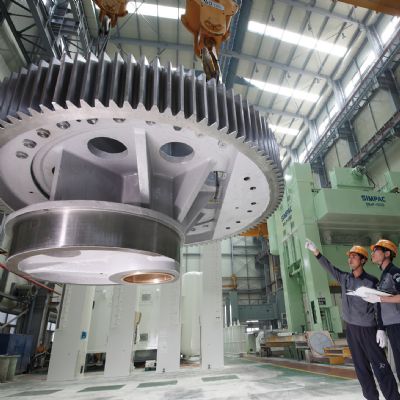