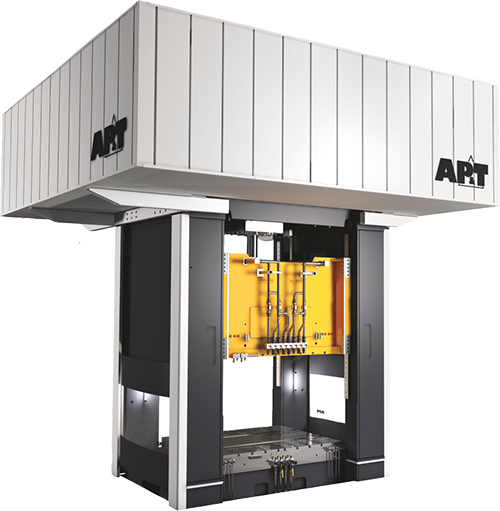 “The design has made it possible to limit the number of unique moving parts, cut down on oil volume, reduce pressure in the hydraulic system to a maximum of 250 bar, and eliminate the effects of any variations in oil temperature,” says Patrik Haglund, AP&T product manager-presses. “This lays the foundation for a very robust process with a high degree of availability and repeat accuracy, at the same time that the need for maintenance is substantially reduced.”

The servo-motor solution also reportedly has reduced energy consumption by 40 to 70 percent, depending on the application. Heat loss generated by pressure valves can be avoided, and some servo motors are used as generators during nonworking portions of the stroke. The press’ cushion cylinder also is operated by servo motors that work as generators. Braking energy distributes to motors used for acceleration and forming through a kinetic storage system and a central direct-current converter. Because energy stores within the press, electricity from the grid during peak loads is not required, resulting in a lower connection fee. Stored energy surpluses also can be restored to the grid.

“The acceleration and retardation speed is an impressive two to three times higher than that of a conventional hydraulic press, thus enabling extremely short cycle times,” Haglund says.