Data for the sake of data is not necessarily a winning proposition. We’ve all heard that measurement holds the key to improvement. But what should metal formers measure, what data are relevant, and what do we do with those measurements and that data to really derive benefit? Let’s explore that topic in regard to press-line part transfer and see what else is cooking with this technology. 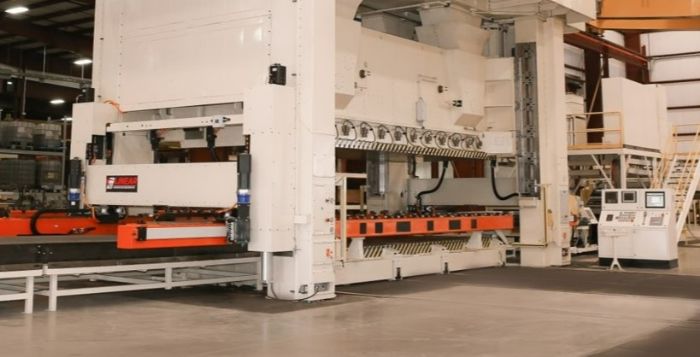 One common-sense area where data collection provides actionable intelligence is preventive maintenance of capital equipment, including press lines and their major components. More specifically, unexpected component failure on a press-transfer system turns an entire press line into an expensive paperweight. Hence the development by transfer-system providers of sensoring and reporting technology for monitoring of key wear components.
“This introduction by equipment manufacturers provides for effective equipment monitoring and preventive maintenance,” explains Paul Stirrett, vice president of sales and marketing for Linear Automation Inc. (a subsidiary of Linear Transfer Automation) and 22-yr. industry veteran, who provides a rundown of the latest industry part-transfer-technology developments for MetalForming.

Sensors in such a transfer-system product would include components involved in actual part transfer and material feeders.

“Specific to transfer systems,” explains Stirrett, “tracking would include bearing life, vibration, wear of components in linear rails, panel temperatures to determine overheating of drives—all sorts of enhanced diagnostics. We can identify, with usable data, any related process bottlenecks, or perhaps a drive not operating properly. Having all of this information at a metal former’s fingertips is pretty powerful stuff.” 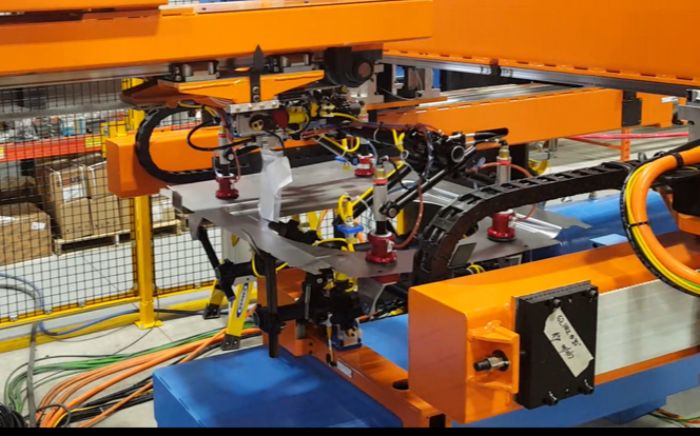 Such systems perform data collection via vibration, temperature, level and pressure sensors, strain gauges, accelerometers and other devices.
In some cases, such as with Linear Automation’s Iris Industry 4.0 product series, suppliers can incorporate the technology on new equipment or retrofit it, with data collection and analysis performed at device or plant level, or via the cloud. With Iris, for example, Linear Automation offers an option where the company’s cloud environment will host all data, and provide daily and weekly reports.

“Should a big OEM or Tier One shut down, hundreds or thousands of employees don’t go to work that day due to a preventable issue in a machine or line—preventing that issue shows the power of Industry 4.0,” Stirrett says. “Industry 4.0 represents the future for manufacturing, and it’s here today and evolving.”

Because transfer systems touch every other component and process in a press line, implementing Industry 4.0 technology ideally integrates with all of the other pieces. Recognizing this, seamless integration has become another developing trend. 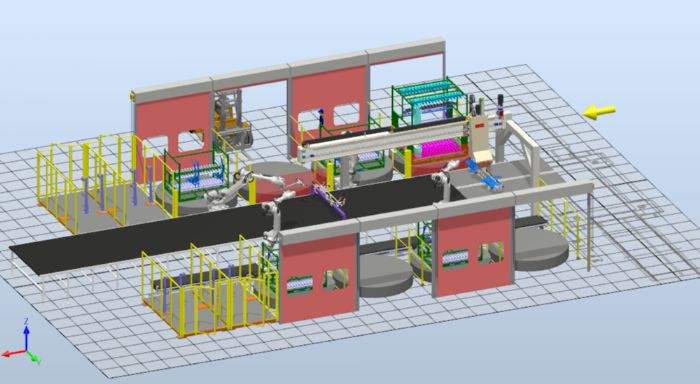 To ease the integration process, suppliers of key technology such as presses and transfer systems—including Linear Automation, which recently added a controls subsidiary—have themselves developed control technology to tie everything together. This includes packaging control of transfers, material feeds, lubrication and the presses themselves into a single system. This demands much from the provider, notes Stirrett, given the complexity of a line outfitted with transfer technology.

“A transfer system goes underneath perhaps a 3000-ton ram and exits just in the nick of time,” he says. “An out-of-sync process can crush $1-2 million worth of equipment. 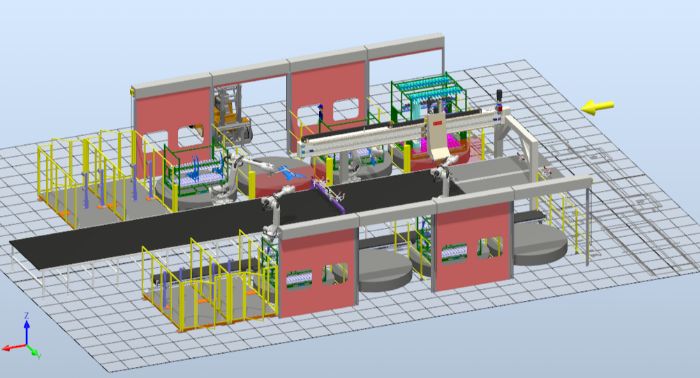 “In particular, synchronized controls provide a lot of flexibility when including coil feeding and destacking at the front of the line,” Stirrett continues, noting that while this capability has been around for a while, it recently has picked up steam. “A coil can be backed up and shifted over, allowing a destacker in for blank feeding—all automated on new equipment or as a retrofit. We see that more and more as metal formers adopt blank feeding to increase material utilization to cope with higher material costs and limited availability. And, overall, one-stop integration means only one purchase order and one vendor to deal with, which many metal formers see as a major plus.”

Retrofitting of transfer systems themselves along with controls is trending, according to Stirrett, as metal formers seek to return aging presses and their lines to productive form. 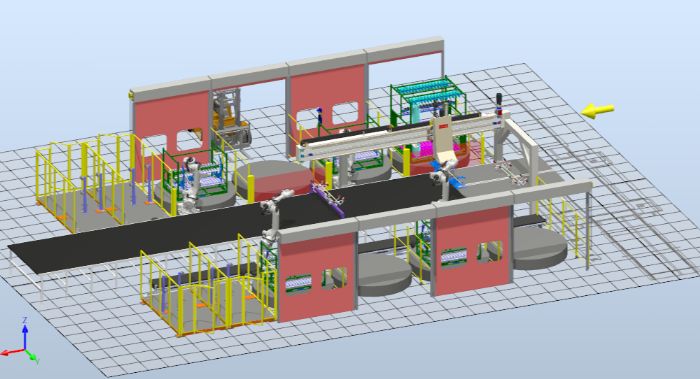 “Suppliers can breathe new life into these lines, where the press originally may have had 20-strokes/min. capability but ran at only 8 or 12 strokes/min. due to old controls and an outdated mechanical transfer system,” he offers. “Updated controls and newer transfer technology, such as servo-driven, can up press speed to the original 20 strokes/min. and perhaps even beyond.

“Resuscitating a press in such a way represents a major trend,” he continues. “The bigger the press the deeper it goes into the ground, so removal and replacement becomes quite the job. These great pieces of capital equipment may have reached only half of their shelf life, so it pays to retrofit. And, a one-stop integrator can perform all of this and even provide guarding and similar ancillary line pieces.”

The ability of part-transfer systems to fully integrate in press lines mean the ability of metal formers to leverage ever-evolving transfer capabilities.
“Many parts must be manipulated at high speed, meaning either flipped or rotated laterally,” Stirrett says. “These needs, plus the complexity of parts means that only a few years ago no one saw these applications as possible with transfer systems. That’s no longer true. We can simulate finger tooling and test out applications, and show that they’ll work.”

Also possible transfer systems that allow dies larger than the press bed to function without the need for a new press, thanks to the ability to manipulate pitch sequences forward and backward, or rotate parts quickly via servo motors. The takeaway here: Consult with your supplier to find out if an application can benefit from automated part transfer.

While a discussion of part transfer in metal forming operations typically centers on what goes through the press ram, perhaps the greatest efficiency gains come at the end of the line, and the industry has taken notice.

“Auto racking, or automatic placement of parts off of the press and onto racks, or into bins or shipping containers, represents what I see as the biggest trend and coming area of growth,” Stirrett says. “The industry often ignores end-of-line automation, making auto racking the final frontier of press-line automation.”

Expect in the coming years to see the entire pressroom automated to a significant degree, predicts Stirrett, with the greatest technology gains coming at the end of the line, thus removing a huge bottleneck. A monotonous and strength-sapping process that holds great potential for injury makes manual part handling off of a press and transporting or manipulating into containers a difficult position to fill—even more so given current labor shortages.
“Many manufacturers still manually rack parts due to challenges when dealing with old, bent and beat-up racks,” says Stirrett. “But today, with vision systems and high-speed robotics, suppliers increasingly are quoting for this type of automation. While a transfer line may be capable of 16 strokes/min., management limits speed to perhaps 7 strokes/min. due to the stress on manual labor at the end—we’ve seen it.”

Available to metal formers today: automation that removes the human element from even the most sophisticated end-of-line part-handling applications, freeing associates for other, safer tasks. Stirrett provides a real-life example.

“Large automotive body panels come off of a press without even touching a conveyer,” he explains. “Parts drop into a shuttle nest for transport via overhead high-speed, linear robotic units that stage the parts for placement by pick-and-place robots into racks located on rotary tables. A fork truck removes a fully loaded rack and the table rotates to provide a continuous supply of empty racks for the robots to fill. Automotive OEMs and Tier Ones are most interested in these full-blown auto-racking solutions, as well as appliance makers. Simpler yet efficient setups may include robots that bin-pick parts for placement into shipping containers—again, fully automatically.”

Simulations of auto-racking and bin-picking systems, without time-consuming and costly installation and trial-and-error debugging, add to the efficiency. (See such a simulation, for an automotive end-of-line application, in the video above.)

“We provide simulations to prove out this automation offline prior to any installation,” Stirrett offers. “Five years ago, technology for such simulation didn’t exist. Now, manufacturers can see exactly how the automation will operate, and the simulation provides deadly accurate run rates.” MF 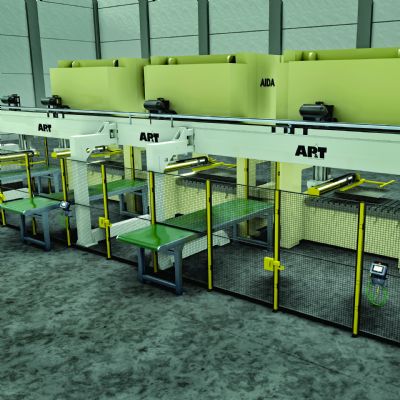 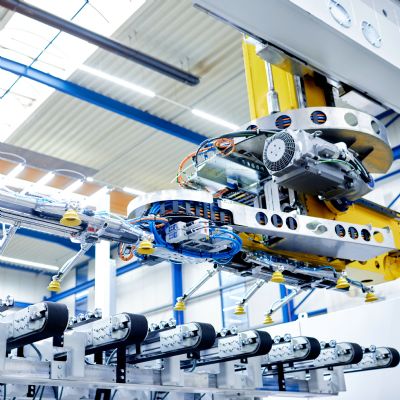