In 2008, engineers at the Whirlpool Corp. dishwasher plant in Findlay, OH, were tasked with developing a whole new of assembling stainless-steel tubs. And the new assembly process required a new approach to part design. Jay Hipsher, the plant’s lead process engineer for metal stamping, led the efforts to tackle that task. “Attempting to manufacture the new stainless-steel tub components through our three automated press lines,” he says, “it quickly became clear that the 1990s-vintage press-line automation would not stand up to the task at hand.”

“We looked at several styles of press-to-press automation systems to upgrade our lines,” Hipsher says, “and robotics clearly made the most sense, particularly when considering the accuracy of placing blanks in the first operation (draw forming). Also, our production runs have been shrinking to keep pace with lean initiatives throughout the plant. We’ve seen inventory levels drop from what used to be a week to just a day, which means we have to change dies much more often than we used to—typically twice a week or so. Thanks to our new robotic transfer setups, we can change over the stamping lines in 90 min. or less, whereas line changes used to take as long as an entire shift. And, now there’s no debugging needed—we call up the new robot program, change the dies and we’re good to go.”

Of the three press lines producing stainless-steel stampings—six SKUs in all—A line comprises six presses and stamps two styles of inner doors; B line employs six presses and stamps two styles of bottoms and one top; and D line houses four presses to make the tub wrappers and includes a conveying line with a pick-and-place robot to automate parts cleaning. Press capacity ranges from 200 to 600 tons. B and D lines hit the production floor in mid-2008; A line was delivered in February 2010 and was being installed during my visit to the plant in mid-March, with a scheduled startup date of April 10.

Stainless steel comes in the door in coils weighing as much as 20,000 lb, and route through the plant’s shear line, complete with straightening and leveling operations and the application of a dry lubricant—Chemform from PPG. The line then cuts and stacks blanks.

“The fact that we apply the lube inhouse,” says Hipsher, “creates a challenge for us. Rather than having the lube applied at a service center on a long line that allows the lube to cure before blanking and stacking, our relatively short line limits the curing time for the lubricant. This means that the lube has to finish curing in the stack (you can actually feel the heat coming from the stacks as the lube cures). This can cause the blanks to stick together, more so in the humid summer months.”

Blank adhesion from curing dry lube once caused headaches for the plant’s press-line operators, until ABB’s press-automation team took on the new automation project for Hipsher and his group. To ease robotic destacking at the front of the press lines, ABBdesigned and integrated air-knife fanning systems driven by a Bosch Rexroth/Indramat servo drive.

“Our operators used to spend a considerable amount of time dealing with destacking each of the lines—adjusting, moving, prying, etc.,” says Hipsher. “Now, while the robots have reduced cycle time through each line from 9 to 10 sec. to as little 7 sec., our OEE (overall equipment effectiveness) has soared because we’re not shutting down the lines to manually separate blanks to avoid hitting doubles. Net production through our three lines has nearly doubled.”

At the beginning of each destack cycle, an eddy-current sensor checks for double blanks; a positive result sends the robot back to the stack to release its load and try again. It makes three attempts to pick one blank before calling for operator intervention. Also, at the beginning and end of each stack, an ABB-engineered vision system kicks in to inspect blank position in space. An overhead camera snaps a photograph of the blank as it’s held by the robot end-of-arm vacuum-cup gripping tool and compares its position to the programmed position.

“The only time we see any variability,” says Whirlpool electrical controls engineer Mark Cosiano, “is the first and last inch or so of each 2-ft. stack of blanks. Any offset data immediately gets fed to the robot controller to adjust blank positioning in the press on the fly, with no noticeable increase in cycle time. And it’s that initial positioning in the first draw die that’s critical—that die sets the clinch-seam flange and creates the part features that ultimately fixture the stamping in the remaining presses in the line.” MF 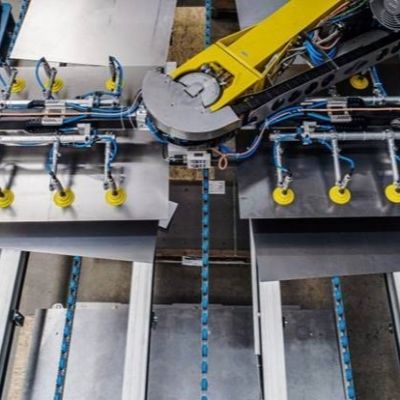