The application of advanced high-strength steel (AHSS) with ultimate tensile strengths of approximately 600 MPa (85 ksi) are well established within the automotive industry. Current trends indicate growth in applications requiring even higher strength grades up to 1000 MPa (140 ksi) and beyond. Stamping AHSS materials at these strength levels can affect the size, strength, power and overall configuration of every major piece of the press line, including coil-handling equipment, coil-feed systems, straighteners and stamping presses.

It is fairly well known that the tonnage rating of a press represents the maximum load that can be exerted, in continuous operation, without causing damage to its structure or drive system. Tonnage rating typically is determined at a slide position between 1⁄32 and ¼ in. above bottom-dead center (BDC), depending on press design and the manufacturer. 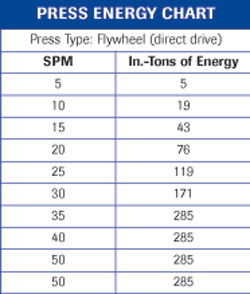 Die-process engineers understand that the available working force (available tonnage) of a mechanical press decreases as working distance above BDC increases. This occurs because the lever-arm angle—the relationship between crankshaft angle and the pitman—has reduced mechanical advantage higher in the stroke. Engineers must keep this relationship in mind when developing deep-drawing processes where drawing begins several inches above BDC.

Higher pressing forces (tonnage) obviously are required when stamping AHSS materials, but press energy is of prime concern. The energy rating of a press deals with the product of the applied press load and the distance through which the load must be applied. Unfortunately, many die engineers do not fully comprehend and apply press-energy data.

Press energy—often expressed as in.-tons of torque, expends with each press stroke. In combination, the flywheel stores and delivers the required work energy while the electrical motor restores depleted energy by maintaining flywheel speed and avoiding excessive slowdown. Forming and drawing processes can consume large amounts of press energy, due to their long working distances. For example, pushing 50 tons through 1 in. of forming (on mild steel) would require 50 in.-tons of energy; a 3-in. deep draw requires 150 in.-tons of energy. Changing the material to an AHSS grade might require 100 tons of force working through the same 3-in. distance, requiring a machine rated for at least 300 in.-tons of energy.

Simply matching the energy requirements of a stamping process to the rated energy capacity of a press may not be sufficient, particularly with AHSS materials. Stamping higher strength steels requires higher blankholding and punch forces, resulting in increased frictional forces and interface temperatures. When interface temperatures reach a critical point, lubrication may break down and other forming and die-related problems, such as galling, can occur. During a production run, it would not be uncommon to reduce the stroke rate of the press to reduce the process operating temperature and eliminate these thermal-related forming problems.


Consider, for example, the relationship of press speed and press energy for a 600-ton press (see table). This is summary data only; the press manufacturer’s table provides complete data from 0 to 60 strokes/min., in 1-SPM increments. Full energy for this particular machine is rated at 35 strokes/min. When press speeds are reduced below this point, the available energy diminishes rapidly. Slowing the press below this critical speed may eliminate thermal problems, but now there is not enough press energy to carry out the continuous stamping process.

One to address this “energy crisis” is to consider the benefits of a servo-driven mechanical press. In a servo-driven press, high-capacity servomotors replace the flywheel, motor and clutch/brake. A servo motor can provide energy and torque that remain constant even at a press speed of 1 stroke/min.

Other advantages of servo-drive presses include the ability to program stroke and slide velocity, to dwell anywhere in the stroke, and to dwell at BDC, all without energy loss. These machines can yield high productivity, low maintenance and low energy costs.

A servo-drive press can be programmed to make multiple hits on the workpiece at or near BDC, which has been shown to reduce springback in some cases. This can prove very beneficial when forming AHSS materials, due to their high propensity to spring back after forming.


Worthington Industries Named a 2021 Supplier of the Year by ...