Imagine a road with zero friction. A car could not use its tires to initiate motion and, once moving, the car would require wind resistance or some other external force to slow down and stop. Driving up or down slight inclines would be impossible.

In the metalforming world, many consider friction a nasty word. It causes so many problems that press shops would love to eliminate friction. Yet, the world of zero friction would make it very difficult to form most stampings due to lack of control.

Fortunately, press shops (both physical and virtual) can incorporate friction as one of their tooling design options. Friction would be great if the coefficient of friction (COF) was constant. However, the variability of COF caused by differences in lubricant thickness, tooling temperature, water/solids ratio, material parameters and other forming inputs is the culprit. Several decades ago, the ability to hold water (no tears) was the main goal of press shops. Compensation for variations in friction was possible by keeping the amount of sheetmetal stretching below the failure level (edge of the deformation cliff).

Today, the demand for product dimensional consistency means even the stampings that hold water and are safely removed from the edge of the cliff can be severely affected by changes in the COF. Control of process variables now must be improved by one or two orders of magnitude.

A major contribution to the COF is the surface topography (morphology) of the sheetmetal surface. For this reason, the surface peak height and peak count, measured by a profilometer, often is specified for painted surface appearance and COF. Certain topographies have a low COF, while others have a high COF. A graphic description of a low COF is a forest from a high flying airplane. Complete surface coverage of clumps of equal-height trees (rounded hemispheres of metal) creates a lower load per unit area. The valleys between the trees (groves) contain the lubricant.

In contrast, a high COF resembles the Garden of the Gods in Colorado. Tall, sharp pointed spears create high locally concentrated loads on the die. Flat mesas also rise above the lubricant level to present a dry, flat surface to the die.

Cold-rolled steel coils are given a temper pass as the last stage of processing. The temper pass eliminates yield-point elongation and imparts the specified standard surface topography necessary for identical painted appearance of different groups of stampings.

The study above was initiated when eight coils of electro-galvanized steel were received by a stamping plant. Four coils made good stampings, the other four caused breakage. Tracing the process history of these four coils showed that all eight base coils had been processed at the same time from the same heat of steel. Four coils were then electro-coated by the company that made the steel —which was the normal procedure and the one used for the final tryout steel. These four coils made satisfactory parts. Due to limited capacity at the company, the other four coils were sent to an outside coil-plating company. All four of those coils generated failed stampings. Again, scanning electron photomicrographs revealed a completely different zinc surface topography between the successful coils and the failure coils.

An electro-galvanized steel sample that had an unusual failure event was received by a product application center. One side of the stamping (coil left edge) had failures, while the other side of the stamping (coil right edge) had severe buckles. The COF values were determined across the width of the coil using the draw bead simulator. The COF for the left edge was 0.25, which restricted material flow into the die and caused the failure. The COF for the right edge was 0.15, which allowed excess material to slide into the die to create buckles. Again, the scanning electron photomicrographs showed a major difference across the width of the coil. Without data highlighting the differences in COF, major changes to the tooling (grinding and welding) probably would have taken place to make that coil run successfully. Unfortunately, if the next coil was normal, the whole die modification would have to be reversed. Getting a die back to its “sweet spot” is not easy after undocumented random changes.

In the old days it was nice to know something about the steel you were using. With the strict, new requirements on dimensional consistency, minimum thickness after forming, cosmetic appearance and other stamping specifications, maximum information about your steel type and processing history is mandatory for running a competitive press shop. MF 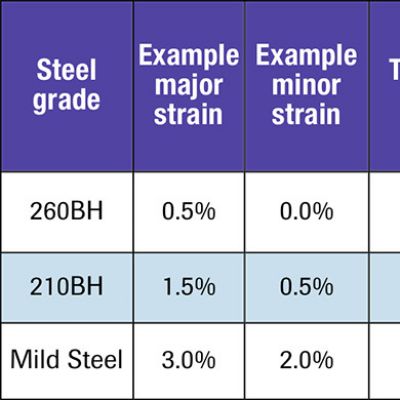 
AISI Presents the Steel Industry’s Highest Honor to its Past...