Evaluate The Results Before Taking Action

Haste makes waste. This operational rule should be applied to all aspects of business and private life. If we do things in a hurry without analyzing the probable outputs, things will go wrong. Let’s review some other operational rules that are more applicable to industry. Press shops offer a good starting point.

1) Averaging data loses information. Something happened to a production stamping, creating increased springback; an embossment does not contact the punch; and the part exhibits dimensional variation from the specifications. Six inputs to the stamping have been identified as possible causes and are labeled A, B, C, D, E and F. The die was removed from the press on Friday night. To save time all inputs were modified by a crew of diemakers on Saturday. The die was reinserted in the production press on Sunday and new measurements were made of the problem areas. Instead of correcting the problems, the magnitude of the problems increased. No additional corrections were obvious.

Simultaneously changing all six inputs (A to F) did not save time, but wasted time. If some of the six inputs can be changed with the die still in the press, only one input must be changed at a time. Change input B and run some stampings. Did the change to input B help correct the problem? If so, leave correction B in the die. If correction B made the problem worse, we have learned two useful pieces of information. First, input B is affecting the problem. Second, try reversing what was first done to input B to see if that helps correct the problem.

When changing the inputs that only can be modified by removal of the die, only one input change can be made and then the die must be replaced in the press to check the result. Mixing all six input changes before testing the individual result simply produces average data with lost information about which inputs are important and the direction in which the corrections must be made.

2) Opinions without data are simply guesses. Some attempt to attack a forming problem by assembling a brainstorming session. Possible problem solutions are contributed by attendees and recorded via a white board, paper pad or other method. When all contributions have been recorded, voting is conducted to select the top three or five candidates to be investigated. How many persons providing these suggestions have valid data to propose a viable cause? Has anyone bothered to ask the stamping for data relative to the problem?

A simple example: cracks of different lengths in the offal surrounding the final stamping. Often, combinations of long and short cracks are generated from the blanked edge. However, if production records show that the cracks never extend into the final stamping, then these cracks are not the cause of the forming problem. Unfortunately, that opinion does not include complete data. The sheetmetal surrounding the final stamping develops elastic stresses during forming just as the stamping does. Different crack lengths in the offal change the magnitude of these stresses, modifying the stress state and springback of the final stamping. When attempting to troubleshoot this problem, the evidence has disappeared down the scrap chute before it can be examined.

3) Solutions without data are really bad guesses. Enough problems fit this category to fill a huge book. For example, machined or welded draw beads are found in a large proportion of dies. These draw beads are placed in the die at build time. During die tryout, the height and shape of the draw beads usually are modified to better control material flow from the binder into the stamping. As production continues, the draw beads wear down and lose control of the blank. Bringing the die back to initial buyoff status often requires extensive repetition of initial die tryout. Why? Because the initial draw-bead configuration was not recorded. Data from a simple pin profile gauge would allow a set of templates to be created for restoring the initial draw-bead profiles during future rework.

Production of a box-shaped stamping has been running smoothly for three months. The customer has sent you a simple engineering change to place a dome-shaped embossment in the flat bottom of the box near one corner. The change looks feasible so the die is pulled Saturday morning for the modification. The modified die is placed back in the press Sunday afternoon in preparation for Monday production. Come Monday, the stamping no longer meets dimensional specifications. The required embossment completely changed the deformation of the nearby corner. Located closely enough to the corner, it pulled material from the corner but reduced material flow in other directions. Other problems also were generated. The die was modified without necessary data. It took several days to finally modify the die to produce acceptable stampings.

This and many other problems are being solved before a single change is made to the hard die. Virtual forming (computerized die tryout) provides important data. While not always perfect, the generated information proves much better than no data. In this case, the computer program can show the current die and the modified die incrementally forming the stampings as a video, with the tooling erased. Differences in deformation and input adjustments can be compared and modified with simple keyboard strokes.

4) A line of data points beats one data point. An important material property is the work-hardening exponent (n-value). This is best obtained through a series of tensile-test measurements between a strain of 10 percent and tensile strength that are plotted on a graph or computed by the tensile-test controller. The slope of the curve represents the n-value. From the n-value one can calculate the percentage of uniform elongation. The reverse can be accomplished, but the n-value and uniform elongation then would depend on one single data point taken at the maximum load. Given a stress-strain curve with a flat maximum-stress curve, which data point do you take? Working with the new advanced high-strength steels, as a major change in procedure, plotting the instantaneous n-values is required because their magnitudes change as the material deforms. MF 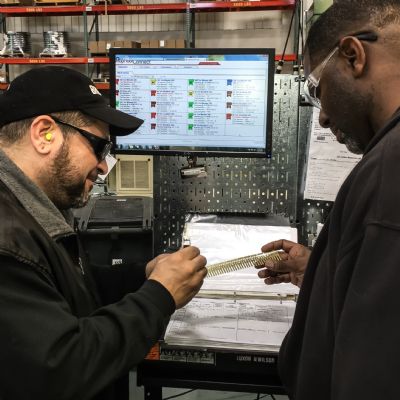 
Transparency: A New Age in Metalforming