During these miserable economic times, the volumes of stamped parts in several sectors have been drastically reduced. How can you justify a large progressive die and press combination when buyers cannot promise the same volumes as in years past? Is there an alternative to a progressive die or a series of small dies in conventional small presses operated by a small army of operators?

I am announcing a radical approach to the design of stamped metal parts, tooling and presses. One of my clients has refined and successfully implemented the concept of “Right Size Tooling and Presses” in its metalforming operations. A seminar on May 15 in Spokane, WA, will showcase this new approach to metalforming, followed by a tour of the plant that has mastered the technology.

Right sizing is basically the application of lean principles to the actual tooling and machinery. Right sizing in metalforming can be described as the reduction of, for example, a complex progressive die into its actual hard-working components. Imagine a 14-station progressive die. Now, eliminate the upper and lower die plates and continue to picture the 14 activities as separate and independent. Instead of a large die set, picture a set of 14 or fewer small dies. The dies are opened and closed with inexpensive pneumatic or hydraulic actuators, not conventional small presses, and hand-fed by sitting operators. Now picture the entire process operated with one person!

The process uses electronic sensors to eliminate bad-part production. The orientation of the small dies is at an angle—the person placing the blank into the first die, and then sequentially feeding the part through the various small dies, does so with the help of gravity. The part slides into the die and electronic sensors verify its proper position. A green light lets the operator know that all is okay. The actuators cycle the small die and the part is ejected, using gravity, into its receiving platform. The operator picks up the previously formed part and walks it to the next die and the process repeats until the part is fully formed. The initial blanks for this process can be made from coil stock fed into a conventional gap press with a small die. However, only the required number of blanks is made for the number of parts in the run. The entire process goes against the conventional grain of batch processing. Your imagination has to firmly wrap itself around the concept of single-part processing, and then you will be liberated to rethink everything.

At the end of the processes, you may incorporate welding stations, riveting, nut insertion and other secondary value-added steps, with no need for an enormous die and press combination and several operators. All of the stations are operated by one person.

The final process: dimensioning the part with an automated fixture, activated with a single pushbutton that captures and displays the actual dimensions to the operator and stores them locally or on the company’s server. To take it to the final step, imagine the little dies under the control of a centralized computer that can reconfigure them to make similar parts in different styles.

Go to www.mfgadvice.com to learn more about the above-mentioned seminar and plant tour. This is new, radical, exciting and possibly a company life-saving process in this era of low volumes and minimal tooling funding. MF 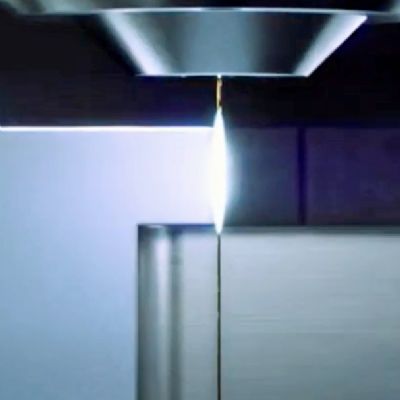