Debunking Reality: The Value of a Gut Check

Recently I met with an automotive-aftermarket service company, a rather large business with thousands of North American locations. I’m told that the near simultaneous closing of 2000 automotive dealerships and the recession—where penny-pinching drivers have held onto their vehicles longer—had a dramatic effect on this business segment. Nearly $7 billion in business opportunities have been shifted a from dealership parts and service bays to be grabbed up by independent parts and service aftermarket companies. These companies were challenged to quickly capitalize on this tremendous opportunity. Simply opening new franchise locations and throwing more workers into the fray could result in a revenue spike. However, considering the investment required, these aftermarket-service companies had to determine whether the initial revenue load could be sustained, and whether the deluge of new, first-time customers could be converted into loyal repeat customers. 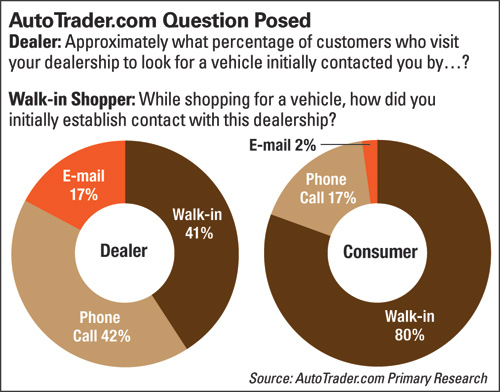 Given the sophistication of state-of-the-art database-management software, differentiating new from existing customers, and how various advertising activities impact new-customer acquisition should be a relatively simple task. But technology only goes so far; how well a company measures this has more to do with the business process surrounding how consistently your employees introduce customers into the database at the point of sale. The core issue becomes training—not just transferring knowledge, but also providing supportive reasoning that helps employees understand how their actions impact the business’s overall performance.

Here’s a simple example. We’ve all been asked for our phone number or zip code by various retail establishments. This data helps marketers identify potential locations for new stores. When customers decline to share this information, in some cases the cashier will enter the zip code for the store—a seemingly harmless data entry but one that over time can seriously skew the data from which key management decisions are made. This is why intuition can sometimes lead us down less-productive paths, and why it’s important to quantify gut feelings, gain factual insights and use this knowledge to better inform the organization.

Back to the automotive-parts and service aftermarket company previously mentioned. Its executive marketing and advertising team was convinced that store managers were not performing certain required tasks. It seems that a few sour experiences throughout the company’s thousands of stores had created a myth within the management team, which believed that its barriers to success were immovable.

Herein lies a challenge for business leaders: We must perform gut checks and continuously challenge our beliefs, to either confirm commonly held views or to debunk myth. In the July issue of Quirk’s, an article titled How AutoTrader.com Uses Primary Research to Clarify the Car-shopping Process, we learn the value of gut checks. The article summarizes the disparity between dealers’ perceptions and their consumers’ actual behavior (see the accompanying graphic above). A contrast between the dealer’s gut feeling of consumer behavior and the consumer’s actual behavior is highlighted using a simple consumer-intercept study. Consider how different a dealer’s approach to prioritizing first-contact interactions and advertising spending would be, given the stark contrast between perceptions and consumer-behavior reality.

How different would the plight be of the executive team from the automotive-aftermarket service company if it challenged its gut feelings and identified similar disparity?

Intuition and gut instinct are not only valuable, but their value rises as we gain experience. I support the occasional challenge to confirm that perception is reality, especially when the commonly held belief may be limited in scope and rooted in outdated points of reference. Conducting simple experiments that challenge long-held beliefs can debunk myths and form a foundation for paradigm shifts that can lead to better decision making and improved performance. MF
Industry-Related Terms: Checks, Core, Form, Point
View Glossary of Metalforming Terms