At Sun Microstamping Technologies, faced with aging lubricant applicators and a light fog in the workplace, vice president of operations Steve McKenzie recently tasked manufacturing manager Mike Erodenko and toolroom manager Mike Brennan with finding a more economical and reliable applicator, and a to reduce the associated costs. Brennan suggested applicators that he had previously utilized, and Erodenko started the project to accomplish this task.

Control—that’s what Erodenko sought when he set out to replace the aging pneumatic mist oilers used to lubricate dies running in the company’s 48 high-speed presses.

“We had several of the old-style oilers,” he says, “and while they were able to spray intermittently, we struggled to make them operate that . So, they stayed on all of the time, flooding our dies with atomized oil that ran all over the tools, presses and onto the floor. The pressroom looked and smelled bad, not to mention how much lubricant was being wasted and the time and costs associated with cleanup.”

“With the help of our local distributor, Randy Whiteside (Press Masters, Smyrna, GA),” Erodenko says, “we hooked up with Minster to help with the press repairs, and with Pax (Celina, OH) to upgrade our die-lube systems.”

Launching its collaboration with Pax, Erodenko sent the company samples of the die lubes it applies. He sought a recommendation on one lubricant-application setup he could use throughout the shop.

Sun uses three lubricants to cover its array of high-speed progressive-stamping work. While primarily a supplier of electrical components for the automotive industry, recent growth has come via the medical/dental market and in the stamping of components for lithium-battery cells. The lubricants on its shelf:

• A middle-grade slightly heavier lubricant used primarily to stamp silver-plated parts for relays, “which can be a little abrasive to our tooling,” says Erodenko; and

• A heavy 940-SUS viscosity oil for heavy-gauge stamping and for coining.

The Pax solution: An airless spray system (Pax model 2-2 pre-pressurized setup—two distribution pumps, a 2-gal. reservoir and two piston-style spray nozzles on magnetic mounts, that run from shop air at 30 to 125 PSI. The piston nozzles, say Pax officials, are specifically designed for vanishing oils, to prevent dripping, but also can spray thick lubricants. Since launching its new lubrication program, Sun has installed the system on 18 presses.


Webinar: How to Remain Safe Working with Metalworking Fluids During the COVID-19 Pandemic

The system’s design makes reservoir refills and changeover from one lubricant to another a snap. Erodenko explains that with its previous lubrication systems, it had to shut off the presses because the tanks were pressurized with air. “We had to depressurize the tanks, fill them with oil, repressurize and then restart,” he says.

“Now, the new systems have a little reservoir not pressurized with air,” continues Erodenko. “The operators can fill it up with oil while the press runs, so there is no downtime due to low or no oil. The units also are easier to maintain and clean out. To change lubes, there’s a drain plug on the bottom of the reservoir that makes it quick and easy to drain, clean and refill.”

“We’re getting much better control of where we’re applying the lubricant,” Erodenko continues, “and use several different nozzle designs based on whether we want a wide spray, pinpoint spray or something in between. While before we were flooding the tools, now we get the lube—without excess—in the right place at the right time.

“Sometimes we don’t need much lubricant at the front half of a die,” Erodenko adds, “while at the forming area you may need more lubricant.”

On some presses, Erodenko wired the system controls into a cam system on the press. In other cases, they’re wired to SmartPac units (on Bruderer presses), “so that we can set them up to spray after so many counts at a certain angle on the press,” he says. On units not wired directly to the press, Erodenko installed optional timers to set the time between sprays.

A benefit to using the timers rather than directly wiring the units to the press controls: “We can easily pick the system up and move it—pumps and nozzles—to a press that we have not yet retrofitted with the Pax system,” Erodenko adds.

Erodenko also notes the improvement in the shop environment—no more smoke or mist in the air. And, the distribution pump is adjustable, “so we can cut down on the amount of oil sprayed each cycle and the rate at which we spray—once every 10 press strokes, 50 strokes or 100 strokes,” he adds.

…pays off more than just by reducing consumption and eliminating oil cleanup. “In some cases, it allows us to perform more work in the dies, streamlining process design for stamping complex parts,” Erodenko says. “With more control over lubrication—where and when—we avoid a lot of headaches and redesign time to make something work.”

Erodenko describes one recent case where his crew relied on the Pax lubrication system to eliminate a pesky slug-pulling problem.

“On one of our particularly challenging tools, used to stamp the lead frame for telecommunications connectors at 300 strokes/min., we had been spraying the oil directly into the tool from the side, our common practice. The tool stamps very thin material (0.007 in.) and features extremely tight tolerances on the punch-die clearance (5 percent). We were pulling slugs and experiencing misfeeds.

“We moved the spray nozzles to the bottom side of the strip,” Erodenko continues, “to only lubricate the bottom of the strip. This prevented oil from saturating the punches and sucking the slugs up out of the die. This job does not run often enough to justify spending a lot of time and money on engineering, so this is a perfect example of how the flexibility and precision of the lube system pays off.” MF
Industry-Related Terms: Forming, Model, Run, Viscosity, Abrasive, Cam, Case, Die
View Glossary of Metalforming Terms 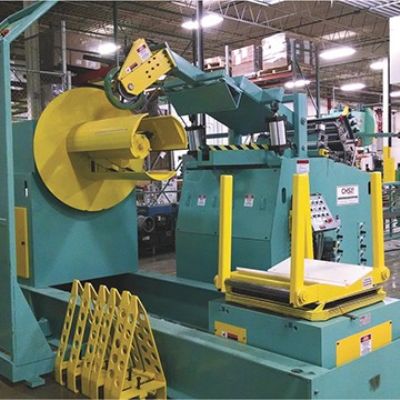 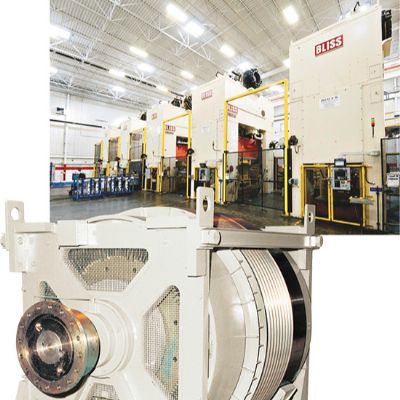 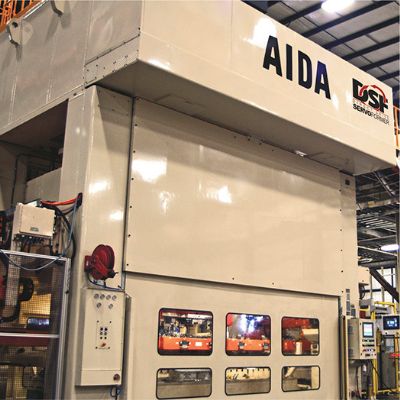 
Webinar: How to Remain Safe Working with Metalworking Fluids During the COVID-19 Pandemic