As a manufacturer of precision gaskets and packings, AP Services processes more than 50 rush orders each day to meet the rigorous 24/7 demands of the power-generation, chemical-processing and wastewater-treatment industries.

Since its founding in 1991 in Freeport, PA, owners Jeff and Kenny Hemphill have taken the business global, expanded its production facility to two plants totaling 48,000 sq. ft., and overseen a plethora of changes.

For example, until 2002 AP Services used clicker presses, circle cutters and knives to hand-cut gaskets from hundreds of paper templates kept on file for repeat customers, with a single cut gasket taking 3 to 4 hr. As global demand for its products skyrocketed, the company struggled to maintain its inventory.

“We needed to increase our productivity exponentially,” says Mike Ehrlich, AP Services plant manager. “After researching our options, we decided that waterjet cutting was the way to go.”

Ehrlich says that he selected the Jet Edge system for its high-rail design, which preserves drive components by keeping ballscrews and drives up and out of the way of airborne particulates, while providing easy access to the cutting surface from all four sides. Moreover, the addition of cutting heads on the high-rail-gantry design extends the overall reach.

Also impressive to Ehrlich: Intensifier pumps, rather than direct-drive pumps, power the system. He notes that the intensifier pumps can produce high pressure more consistently and with less maintenance than direct-drive pumps. He also says that this reliability is important to a service-oriented business, which absolutely must meet the demands of the power-generation industry during its high cycles.

“Our business revolves around service—24/7, 365 days a year,” Ehrlich says. “When a rush order arrives in the morning, we often have to have it shipped that afternoon.”

“With the waterjet, gaskets that once took hours to cut are now cut in 10 to 15 min.,” Ehrlich says. “In fact, we had to transfer our five-clicker press operators to the shipping department just to keep up with the stacks of parts coming off of the waterjet.”

AP Services added a second 6 by 10-ft. high-rail gantry in 2003 and began offering abrasive waterjet-cutting services for machine and fabrication shops as well as mold and die shops. It equipped the second machine with three cutting heads and powered it with a 50-hp Jet Edge intensifier pump. This proved to be such a lucrative investment that, in 2006, the company bought a third—and much larger—12 by 10-ft. high-rail gantry system. Powered by a 100-hp intensifier pump and equipped with six cutting heads, this system’s unique high-rail gantry features a 6-ft. spreader bar, providing AP Services with a 12 by 16-ft. total reach. This is critical for some of the large parts produced for some customers.

With its waterjet systems, AP Services has taken on numerous challenging projects. In one application, the company cut a mammoth 12-ft-dia. circle out of 1-in.-thick stainless steel. The circle featured round holes throughout its interior. With a special fixture, the company utilized the machine’s first cutting head to start around the perimeter and then picked up where the first head left off with a second cutting head to finish out the perimeter. They used both heads to cut out all the holes in the interior.

Another project saw fourteen 21⁄8-in. squares cut from each side of a 6-in.-dia. by 10-ft.-long Type 304 stainless-steel pipe with a 5⁄8-in.-thick wall. It cut the squares 180 deg. apart to a ±0.010-in. positional accuracy. To accomplish this, it used special fixtures, also cut on the waterjet. In addition, it utilized two cutting heads to produce the product in half the time, to tolerance.

The waterjet systems continue to impress Ehrlich, who says he gets thousands of hours out of the diamond orifices in Jet Edge’s cutting heads, and has experienced, on average, an 800 to 1000-hr. interval between seal changes on the intensifier pumps.

He adds that the systems are easy to learn and operate, so much so that he originally trained two operators and they, in turn, have trained six more. MF 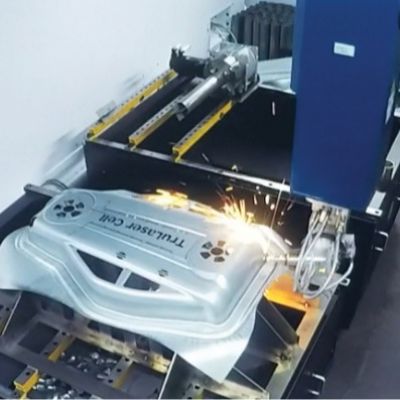