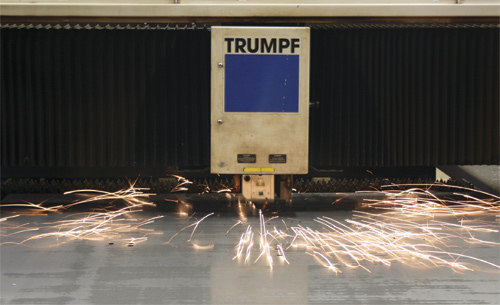 Brilliant solid-state lasers, regardless of whether they use a disk, fiber or rod, have been widely discussed in recent months. Throughout, one thing that has remained clear: The CO2 laser is defending its enviable position as the all-purpose cutting machine.

“This workhorse, available with up to 7 kW of output power, can cut steel from 0.02 to 1.25 in. thick,” says Stefan Fickenscher, product manager, 2D laser machines, Trumpf Inc. “So while a solid-state laser may prove perfect for delicate work and in some cases can cut through thicker steel plate, it simply cannot attain comparable capability throughout the entire range of sheet and plate thickness as its CO2 counterpart. One reason is a simple lack of experience—20 yr. of knowledge accumulated in CO2 laser cutting provide a clear advantage over a modest body of experience and many unanswered questions for newer laser types such as the fiber laser.”

For most fabricators, ever-changing cutting patterns and short runs typify the everyday work. While the CO2 laser delivers superb results when fusion cutting thick and thin materials, the solid-state version looses its advantages of speed and cutting capacity even at modest sheetmetal gauges—0.2 in. and thicker.

However, solid-state lasers are becoming the technology of choice in certain segments, such as thin-sheet processing or for cutting highly reflective materials such as copper and brass.

“Introduced to the market as early as 1995,” says Fickenscher, “more than 100 solid-state-laser cutting systems have been installed to date, including Trumpf’s recently introduced models using disk-laser technology. Users typically are shops specializing in long production runs for thin sheetmetal, or companies already operating CO2-laser machines in their daily business looking to diversify.”

Whether CO2 or solid state, laser-cutting machines run on information provided by an NC job order. “These programs,” adds Fickenscher, “called up with just a few mouse clicks, ensure high cut quality because they automatically deliver the most suitable processing parameters based on the material type and thickness, workpiece geometry, lens focal length and nozzle diameter. Stored in these programs are the appropriate laser output, cutting speed, nozzle spacing and focal length, as well as the required gas pressure for a given type of gas.”

Among the latest capabilities present in state-of-the-art laser-cutting systems, according to Fickenscher:

As a result of these and other innovations, here’s where fabricators are enjoying quality improvements:

• Surface roughness: 10 micrometers for sheetmetal 0.15 in. thick is the target for eliminating refinishing at visible edges.

• Perpendicularity: With proper adjustment, the deviation from a right angle can be limited to 0.004 in. in sheet 0.4 in. thick.

• Kerf width: While the width of the cut inevitably rises with increasing sheet thickness, it is a scant 0.006 in. for sheet about 0.10 in. thick.

• Pitting: Just like erosion, pitting interrupts the regular cutting surface and can be avoided with the appropriate parameters.

Eric Schleich, president of metal-fabrication shop E.S. Metal, Terryville, CT, and a devoted user of CO2-laser cutting technology, is the kind of guy who defies all odds. He received top honors in school for industrial arts, but had a reputation as a renegade in spite of this academic success. School officials enrolled him at E.C. Goodwin Technical High School in New Britain, CT, where the plan was for Eric to learn to be a plumber. But it was machine tools that caught his eye.

“The machine shop blew me a,” he says. “I immediately knew that this is what I wanted to do.” You won’t find Eric, now in his early 50s, crawling under kitchen sinks nor snaking drains. Instead, he’s running a successful precision sheetmetal-fabrication business that he founded in 1985. He runs the 20-person 30,000-sq-.ft. facility alongside his brother Russell (vice president) and his son Kyle, the company’s lead programmer.

The U.S. military frequently taps the company for rapid-prototype development, including recovery trailers and protective turrets that sit on top of Humvees as shields for soldiers who serve as gunners. And Schleich notes that the speed and flexibility of its laser-cutting machines play a significant roll in attracting this business.

The shop over the years has run several generations of CO2-laser-cutting machines, the latest of which are a pair of 4000-W machines. Both models are Trumpf TruLaser 4030 models that feature 80- by 160-in. worktables, and which, says Schleich, “cut 1-in. steel beautifully.”

Some 80 percent of the material processed through E.S. Metal is cut on its laser-cutting machines. “All of our customers request the edge quality that only lasers can provide,” Schleich says. “At one point we were laser cutting stainless steel about 90 percent of the time, when our customer base included numerous companies serving the plating industry. When a lot of that work went to Mexico, we reinvented ourselves. Now, a significant percentage of our work is cutting mild steel for customers in a variety of industries, including automotive and green-energy applications. We don’t try to steer the boat, we just follow the current.”

E.S. Metal’s active customer base numbers around 50. Sixty percent of those customers are big repeaters, the remainder small one-off work. “We have a lot of people from the community stop in and ask us to make a single part for them,” says Eric. And while those types of requests certainly aren’t profitable, E.S. Metal’s founder says he tries his best to honor them. 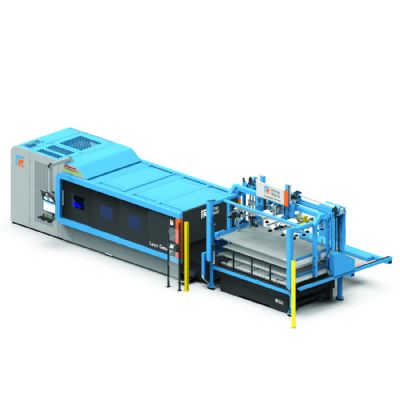 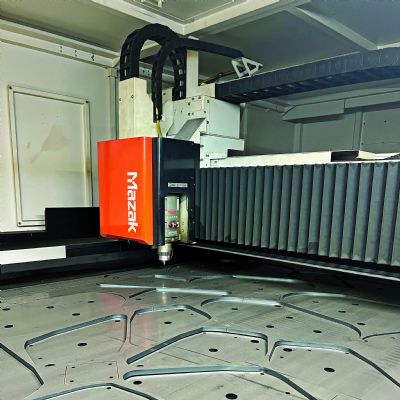