A thorough inspection of a progressive-die strip can disclose much about what has occurred during the metal-stamping process. A die strip is the equivalent of a law-enforcement eyewitness, and there is much one can learn from interrogating the die strip, provided we ask the right questions.

When stamping with a progressive die, part quality and consistency depend on the distance between each die station (referred to as stock pitch or die progression) remaining constant during the stamping process. Each time the press cycles, an automatic feeding system pushes or pulls the material from a coil through all of die stations. After the strip feeds a predetermined distance, pilots or locators ensure it is located precisely in the next station. A close look at the strip will provide visual evidence of a failure to properly control or maintain the progression—the strip will exhibit distorted pilot holes, misaligned match-cuts, out-of-position formed features, out-of-tolerance hole locations, partial or missing cuts or any number of other defects.

During draw forming in a progressive die, the blank edge must be free to flow inward toward the die cavity. Some draw-forming processes can produce parts having different heights. The free flow of material and resulting product geometry can combine to alter the relationship between the station-to-station centerline of the die and the part-to-part centerline in the strip. This causes the die strip to move sides and/or flex vertically during forming. In such cases, the stamper should use a flexible loop in the carrier to allow flexing and movement of the blank without pulling the adjacent parts out of position (Fig. 1).

Another concern is parts moving vertically up and down in the die during the press stroke. For example, vertical movement can occur between the draw stations when forming parts that require more than one draw (Fig. 2). When die operations cause the carrier to move, correcting the problem requires use of a flex or stretch carrier.

Closely inspect the die strip for signs of vertical movement whenever a flange is formed upward in a progressive-die station adjacent to stations that use upper pressure pads to hold the connecting parts down. With strips having stretch carriers, inspect the strip to ensure the radii in stretch loops are as large as practical. Sharp corners or small radii will concentrate bending stresses here, making it the first point to fail when the carrier flexes. Also, check the edges of carrier strip for steps, burrs or nicks and eliminate their causes.

If you discover the strip carrier has stretched permanently, the parts may be progressing too far off progression to fit properly onto the next die station. In cases where the strip has two carrier webs, one carrier may be stretched while the other carrier is not. This condition induces camber in the strip, causing it to veer to one side. This type of camber is different from edge camber imparted by the coil-slitting process. If your carrier strip has a permanently stretched carrier web, it can be shortened to its correct length by forming a small rib or dimple in the carrier. If a center or one-sided carrier develops camber, the strip can be straightened by dimpling or scoring one side of the carrier. Design the dimple and scoring features so that they are easily adjusted in two directions: sides for position and vertically for depth.

Edge camber as-received from the coil can cause the strip to bind in the guide rails that guide the material during feeding. This binding can cause the carriers to bend, distort or buckle, resulting in short feeds. If rubbing is evident on the slit edge of the strip, it might help to relieve the guide rails positioned in between the working stations, and maintain tighter control at the work stations. Another option to eliminate camber: Trim both sides of the coil at the beginning of the die. These notches also can double as pitch-control notches, to prevent overfeeding. MF
Industry-Related Terms: Draw, Edge, Flange, Forming, Point, Bending, Blank, Camber, Center, Die, Strips, Stroke, Webs
View Glossary of Metalforming Terms 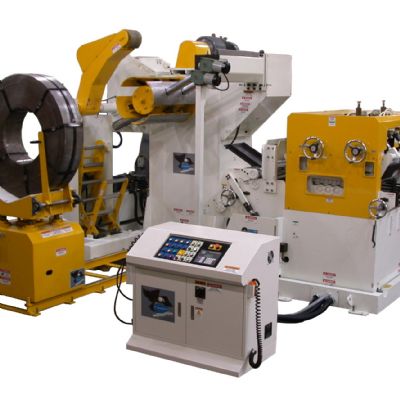