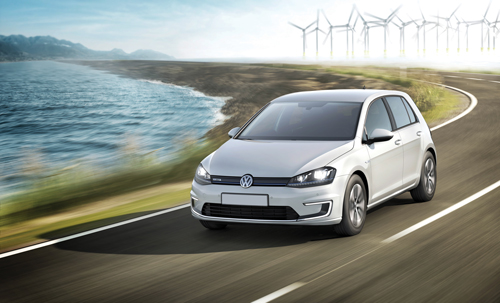 From oilfields to outer space, metal formers and fabricators have provided crucial components and assemblies for energy creation, storage and use. The cyclical industry remains strong, with plenty of areas where metal shapers can, and do, participate.

Let’s survey the energy landscape to ascertain the current and future economics, and explore some applications and opportunities.

The robust U.S. economy owes much to substantial success of the energy sector in recent years, reports Scott Segal, a partner in the Policy Resolution Group at Bracewell LLP, the strategic communications firm for MetalForming’s publisher, the Precision Metalforming Association. Here, Segal, having advised clients in the energy sector for three decades, provides expert insight exclusively to MetalForming readers on the energy sector and its future movement.

“The technological advances enabling access to natural gas in shale formations have stimulated major investment increases in upstream production, pipeline and compression infrastructure, and power-generating construction,” he explains. “In 2018, 90 percent of all natural gas used in the United States was produced domestically, and for the first time in more than 50 years, U.S. natural-gas production exceeded consumption.”

This bounty likely will continue for the foreseeable future, Segal says, because even if the country adopts meaningful carbon restrictions, natural gas has 50 percent of the carbon content than the coal it replaces. As a result, “metal formers and fabricators likely will face strong market conditions for upstream production, pipelines, compressor stations and gas-distribution systems,” he says.

And, despite less-expensive natural gas, the sector has seen a substantial increase in investment and construction of renewable power sources such as solar and wind.

“Due to innovations enhancing the cost-effectiveness of renewables, consumer demand and a favorable tax climate, the U.S. Energy Information Administration has found that non-hydroelectric renewable energy resources such as solar and wind will be the fastest growing source of U.S. electricity generation for at least the next two years,” Segal says. “And as technology improves, the future will be even brighter.”

For those supplying engineering to coal-fired power, he offers, the future is less clear.

“However, the most endangered coal plants have either closed or are phasing out,” says Segal. “The remaining coal plants play important roles in maintaining the reliability of the grid. Therefore, maintenance projects necessitating metal forming and fabricating can be expected to continue for those facilities. If the U.S. Environmental Protection Agency clarifies its position on New Source Review enforcement, the climate for maintenance projects at coal facilities may even improve.”

Seemingly without end, metal formers and fabricators have taken advantage of the energy uptick. As the world gravitates toward conservation and sustainability, industries have responded, enabling numerous opportunities that result in countless application successes. Here’s a rundown of energy subsectors, including applications.

Like the energy sector as a whole, the subsector of electric vehicles (EVs) is gaining traction with no slowdown in sight, according to the Electric Vehicle Outlook 2019, from BloombergNEF. The outlook reports 2018 worldwide sales of EVs surpassing 2 million, an increase from only a few thousand in 2010. The report forecasts annual passenger EV sales to rise to 10 million in 2025, 28 million in 2030 and 56 million by 2040, when EVs will account for 57 percent of all passenger-vehicle sales, and more than 30 percent of the global passenger-vehicle fleet will be electric.

Tighter emission regulations and worldwide environmental concerns help spur this growth, according to the outlook, with significant reductions in battery prices helping EVs to reach price parity with internal combustion vehicles by the mid-2020s in most vehicle segments.

The alternative-fuel and electric-vehicle markets deliver opportunities to metalformers and fabricators, with applications and volumes growing as these technologies take hold. Material development also provides a push.

“The automotive industry’s move away from traditional transportation to new mobility has accelerated over the past few years,” says Dr. Jody Hall, vice president-automotive market for the Steel Market Development Institute. “It’s important that the material used for autonomous and electric vehicles is strong, durable and cost-effective—making advanced high-strength steel (AHSS) the best choice for automakers, suppliers and consumers.”

Battery packaging represents one area ripe for AHSS use.

“Designing with AHSS offers a number of efficiencies over designing with other materials,” says Hall. “AHSS enables smaller section sizes, and smaller sections allow packaging of more batteries. Think of A-pillars and how skinny the pillars are on the sides of windshields, thanks to AHSS. Achieving the same roof-crush and rollover performance with traditional steels would require wider pillar geometry and thicker sheet metal. The same holds true for battery compartments. Less packaging material results in more room for batteries.

“All in all,” she continues, “AHSS is the lowest-cost material for these structural components, allowing more money for automakers to spend on sensors or other components required in the electric and autonomous vehicles of the future.”

The EV future is now for vehicle producers large and small. For example, on the small-scale side, EVS Metal, headquartered in Riverdale, NJ, has teamed up with Columbia University students to assist in fabricating precision metal parts for their student race car club. The club, Columbia FSAE or Knickerbocker Motorsports, has been tasked with accelerating a 600-lb. EV to high velocities and deliver a raceday-capable vehicle.

This year, EVS Metal, with an arsenal of laser cutting, CNC punching and welding machines, laser cut and welded an accumulator for the EV, while also fabricating a fuel tank and tabs for another non-EV club racer.

EVS Metal, profiled by MetalForming in our June 2016 issue, also operates plants in New Hampshire, Pennsylvania and Texas, employing a stacked lineup of CNC turret presses, press brakes and laser cutters. Adding to its roster, this past February the company took delivery of an Amada AE 2510NT single AC servo-drive turret punch press in New Hampshire. More compact than traditional hydraulic-driven punching machines, according to EVS Metal officials, this unit also has provided the fabricator with quicker turnaround on punching processes while saving on energy costs.

Wind Power a Winner for Fab and Forming

Thousands of components make up the modern wind turbine, with forming and fabricating providing a significant portion of the manufacturing muscle, from foundations to nacelle components. The operating environment of wind turbines reportedly greatly exceed those of automobiles, and even though production volumes are lower, as wind power projects increase, the automotive mindset of many formers and fabricators transfer well to this technology.

With a federal tax credit ending at the close of 2019, wind power enters a critical stage, but, “unlike in previous years, when wind development ground to a halt when subsidies dried up, industry representatives are predicting only a modest slowdown,” according to an article in Scientific American.

U.S. wind-farm development activity rose to a new high point in the second quarter of 2019, cites an August 2019 report from the American Wind Energy Association (AWEA). Pushing development: strong consumer demand from Fortune 500 businesses and utilities as well as calls from multiple states for offshore projects. In addition, according to AWEA, wind-turbine manufacturers saw an increasing number of factory orders for more powerful turbines capable of powering almost twice the number of homes as an average turbine installed in the past few years.

AWEA goes on to mention that the wind industry also “supports a record number of U.S. jobs, more than 114,000, with substantial room to grow as the industry continues to scale up in the heartland and offshore. Roughly a quarter of those careers are found at more than 500 U.S. factories manufacturing or assembling wind-turbine components.”

As described above, regulations and government mandates drive a large share of opportunities in the energy and transportation sectors. Positive Train Control (PTC), designed to maintain safeguards along U.S. railroad infrastructure, represents another example.

Described most basically, PTC senses train movement and, if need be, slows or stops trains in a controlled manner to prevent collisions, provide for railway worker and passenger safety, enforce line speeds and manage track congestion. The federal government requires full PTC implementation by the end of 2020, with more than 85 percent of required routes currently in compliance.

PTC demands communication infrastructure as well as energy-controlling technology, with metal formers and fabricators helping supply needed components and enclosures. One company, Fabricated Metals, headquartered in Louisville, KY, constructs aluminum and steel trackside signaling-equipment enclosures for PTC systems. In 2015, the ramp up toward mandatory PTC saw a 50 percent increase in orders at Fabricated Metals for these enclosures—somewhat similar to previous enclosures the company has built for traditional signaling equipment, according to information provided by the company. Keeping pace, Fabricated Metals has supplied the all-welded enclosures, from aluminum or a variety of steel grades, in various sizes and door arrangements. The walls are constructed of interlocking modular insulated panel sections with sealed seams. Inside walls have vertical channels with keyholes for mounting shelves, mounting boards, wire chases and tag boards.

Conventional wisdom, and the history of the process, suggests hot stamping as an automotive application. But as the technology takes hold worldwide, it’s getting a look for other weight-saving applications, including those in the energy sector. For example, a Chinese research paper explores hot stamping as an option to produce electrical transmission-line fittings. Citing expansion of electric power systems and an increase in line voltage levels, researchers at Huazhong University of Science and Technology see lightweight but strong components—in the wheelhouse for ultra high strength steel—as filling a need for such fittings.

The researchers point out that the cast or forged fittings, manufactured from thick metal slabs, possess the disadvantage of heavy weight as well as inhomogeneous distribution of mechanical properties. In their study, a new type of electrical-connection fitting, a clevis-clevis (intertwined U-shaped brackets) component made of hot stamped high-strength steel reduces weight by 60 percent as compared to previous fittings. In the study, two layers of boron steel are hot stamped, which delivers a full martensitic grain structure and 1500-MPa yield strength, to produce the component.

As R&D continues, look for hot stamping to make some gains in the energy arena. To help keep metal formers current on hot stamping, MetalForming presents the Hot Stamping Experience and Tech Tour, September 17 at Urgent Design & Manufacturing in Lapeer, MI. Along with presentations updating attendees on the latest technology developments related to hot stamping, Urgent Design & Manufacturing representatives will provide guided tours of their 165,000-sq.-ft. facility, which features a robot-tended two-press hot-stamping cell, as well as support processes and equipment including five-axis laser-cutting machines and robotic resistance-welding cells. Details and to register.

Solar concentrator dishes track the sun, collecting and focusing the energy from sunlight into a receiver that converts it to usable power. Summit Steel & Manufacturing, Reading, PA, using its design and fabrication expertise, successfully optimized manufacturing to produce prototype and testing dishes for a solar-energy customer. Originally slated for hydroforming from a single aluminum sheet, this approach entailed high startup costs that would make short runs impractical. Instead, Summit developed a forming-jig process that enables welding of aluminum pieces to construct the dish. Summit reports one-tenth of the projected manufacturing cost without a loss in production time. In addition, instead of having to monitor multiple manufacturing suppliers, Summit handled the entire project inhouse. This example, according to Summit officials, shows how renewable-energy companies can focus on their system-design and marketing expertise while relying on forming and fabricating professionals to problem-solve and produce in the manufacturing process. MF 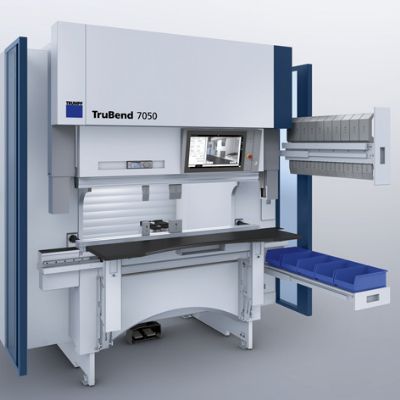 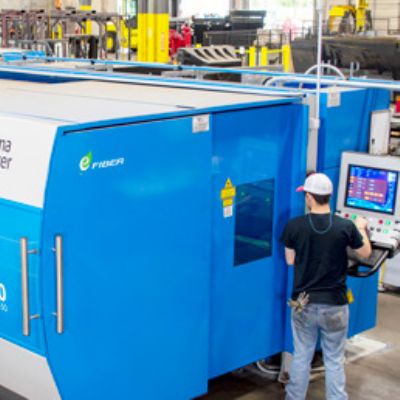 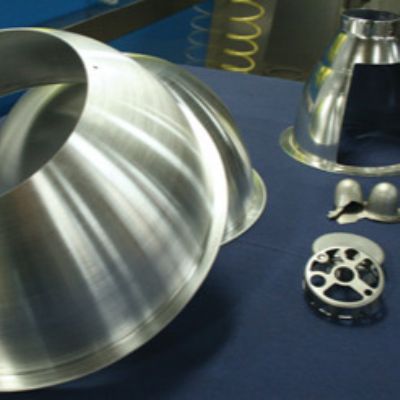