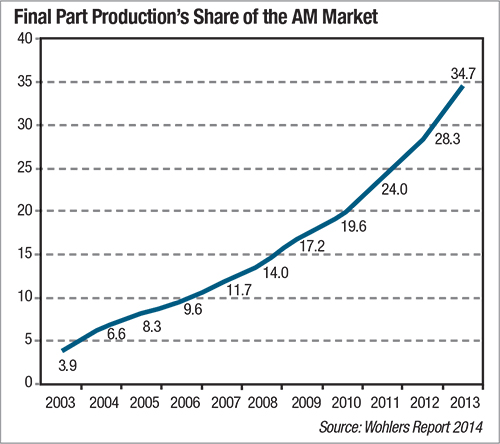 In its research for Wohlers Report 2015, Wohlers Associates, Inc., Fort Collins, CO, finds that the market for additive manufacturing (AM), consisting of all AM products and services worldwide, grew at a compound annual growth rate (CAGR) of 35.2 percent to $4.1 billion in 2014. This means that the industry grew by $1 billion in 2014. The CAGR over the past three years (2012–2014) was 33.8 percent.

Forty-nine manufacturers now are producing and selling industrial-grade AM machines. Since 2003, the final-part-production market segment has grown from less than four percent to more than one-third of total revenues from AM products and services worldwide (according to the Wohlers Report 2014). In capturing this share of the market, the use of AM for final-part production grew by 65.4 percent in 2013.

“We are seeing companies push the limits of additive manufacturing to new levels and apply the technology in entirely new ways,” says Terry Wohlers, president of Wohlers Associates. “Given the vast interest and opportunities that lie ahead, Wohlers Associates believes strongly that the use of AM for series production will grow to become the largest application, by far.”