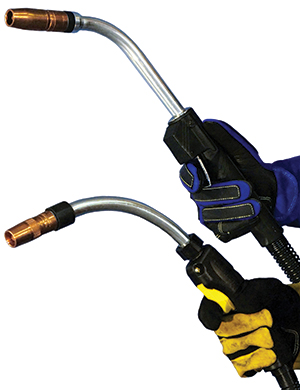 Bernard’s new line of Best of the Best (BTB) Platform guns allows users to build their ultimate GMAW gun by choosing from an expanded list of the best features from the former Bernard Q-Gun, S-Gun and T-Gun lineup. The top features from each legacy gun line have been consolidated into a single gun with a single online configurator.

Also on display will be the Bernard Clean Air fume-extraction gun, newly redesigned to allow welders a more comfortable option for reducing harmful weld fume and smoke in their work area. With a small and lightweight design, this new Clean Air gun has nearly the same dimensions as a regular Bernard semiautomatic gun and is ideal for most medium- to heavy-duty solid or flux-cored wire welding applications. www.bernardwelds.com; www.tregaskiss.com