A 2600-ton Verson transfer press has new life at the New Standard Corp. (NSC) manufacturing facility in Hellam, PA (just outside of York), thanks to the recent retrofit of a new full-servo transfer system brought in to replace an aging servo-mechanical unit.

“We rode that pony for a long time,” says NSC program manager Greg Eisenbach, describing the previous transfer system installed on the press some 12 years ago. In mid-2013 the firm replaced the unit with an HMS Series 900 HD transfer system, to address reliability and repeatability issues.

“And,” explains Eisenbach, “the new transfer system, commissioned in September 2013, also addresses our need for more configurable assets. We’re striving to learn to use our equipment in very flexible s, and that 2600-ton press is a perfect example.”

Hand-Fed as Well as Transfer Dies

The press variety at NSC-Hellam (NSC also operates a plant in Rocky Mount, NC) runs the gamut, from a 45-ton 28- by 18-in. Clearing to the monstrous 2600-ton Verson—262 by 72 in. bed size. More than 100 NSC associates tend to the 180,000-sq.-ft. plant’s pressroom. The customer mix: 25-percent HVAC—compressors, heat-exchange bundles, etc., 25-percent agricultural, 20-percent heavy truck and bus, 15-percent appliance and five-percent automotive. Much of the work runs in hand-fed single-hit dies, which greatly impacted the design of the new transfer system, explains NSC planning engineer Graham Zifferer.

“To enable the press to run hand-fed work, we had HMS design and build the unit to lift up and out of the . On a press that large, this was no easy task. While the standard lift axis on this transfer system is 96 in., we needed 130 in.—the largest lift system HMS has ever built. This allows us to move a tow motor in to change dies, since the standard lift proved insufficient.”

“We needed the parking brackets to be removable,” says Zifferer, “to provide optimum access to the dies and enable hand-fed operations.” The press runs 75-percent transfer work, 25-percent hand-fed work—typically large stampings such as truck fenders run in batches of 1000 or so. To ensure that the crossmember can’t be released without the parking brackets in place, HMS included an interlock system. Sensors in the brackets signal that they’re in place before the crossmember is allowed to disengage and park on the brackets.

Increases in Press Speed and OEE, with Reduced Changeover Times

Also, press uptime has increased by 50 percent, “which helps contribute to the relatively quick return on investment,” continues Eisenbach. “And we’ve also seen setup time on that press (last part off to first part on) cut in half. The tooling-bar packages are simpler to mount. Since we’re mounting dies using a tow motor, we no longer have to roll out the bolster.”

It’s als nice when retrofit technology allows old dies to run better and more quickly. It’s icing on the cake when added capacity attracts new work that previously could not run on a press. Such is the case at NSC, thanks to the enlarged work envelope resulting from the HMS transfer system.

“The original servo-mechanical transfer system had a 60-in. pitch, a fixed 12 in. of clamp stroke and 12 in. of lift,” says Zifferer. “We specified the new transfer with the same amount of pitch, but with 30 in. of adjustable clamp stroke and 48 in. of lift. That added capacity allowed us to recently take on stamping of a large 48- by 48-in. base pan for intermediate bulk containers. The physical constraints of the previous transfer system prohibited transfer stamping of parts that large.” MF
Industry-Related Terms: Bed, Case, Run, Stroke, Transfer
View Glossary of Metalforming Terms 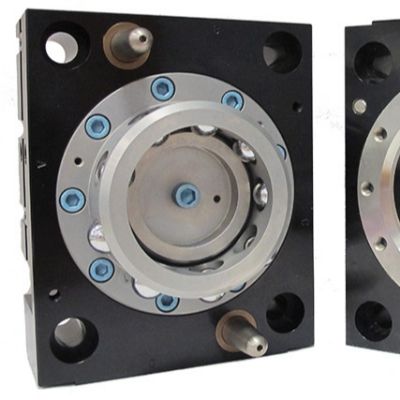