Meggitt Safety Systems, Simi Valley, CA, manufactures extreme-environment fire-protection and safety apparatus—fire and overheat detectors and other types of sensors—for aircraft, spacecraft, boats, trains, missiles and other industrial and energy platforms. Over the years, the firm’s product lines have grown, and along with that new-product development has come the need to upgrade its 1963-vintage hydraulic press. On the firm’s new-press wish list:

• The ability to program and achieve precise cycle parameters, including main ram, knockout cylinder and draw-cushion force and position.

• Recipe functionality, to create and store proven recipes and avoid relying excessively on the skill of individual operators. With its aging press, each time a new tool was loaded operators had to manually make adjustments, identified as a potential source of process variations.

Meggitt found a solution with Beckwood Press Co., St. Louis, MO, which provided a custom 500-ton, 36- by 36-in. draw press featuring 56 in. of daylight, 40-in.-stroke cylinders and a programmable bed cushion. The cushion offers dynamic control through four different travel zones. And, through the press’s human-machine interface (HMI), the manufacturing engineer can specify the desired cushion force for a desired amount of cushion travel.

For example, Meggitt’s press includes an onboard press-health monitoring system (Beckwood dubs it Heartbeat). The setup actively monitors the hydraulic fluid in the press to help ensure optimum operating efficiency. The ability to continuously monitor fluid health against acceptable fluid standards limits or eliminates a major cause of unplanned hydraulic-press downtime: contaminated oil.

Using the Heartbeat system, the press HMI displays actual measured ISO codes, the channel size (µ) and the system’s moisture-sensor reading (percent relative humidity) related to the hydraulic fluid inside the system. Also displayed are limits to these variables, as defined by Meggitt engineers. When these limits are surpassed, the Heartbeat sensors trigger warning indicators, also displayed on the press HMI. This notice, in advance of any component failure or decreased press performance due to contaminated oil, allows Meggitt’s maintenance team to schedule necessary maintenance, such as replacing standard filter elements, in a timely manner. This avoids any unexpected component failure and downtime due to unchecked contamination.

“WebPort connectivity creates game-changing capabilities with regard to troubleshooting and on-the-fly enhancements,” says Harrelson. “For example, a manufacturer operating a WebPort-enabled press can conceive of an HMI or program change in the morning and be operating with the desired change before lunch—all via the remote connection.”

For additional reliability, the hydraulic circuit of the press was simplified by offering separate individual circuits for the main ram, bed cushion and knockout cylinder. Each has its own dedicated pump and motor combination, easing troubleshooting and allowing Meggitt’s maintenance personnel to more quickly zero-in on any potential issues which might arise.

Another item on Meggitt’s wish list, increased energy efficiency, came to fruition thanks to the inclusion of a unique variable-frequency drive (VFD) system, supplied by Parker Hannifin. In a traditional hydraulic press, the ram is powered by a hydraulic cylinder pressurized by a pump or hydraulic power unit, and the hydraulic pump runs at full speed throughout the entire process—approach, pressing and retract. Output is regulated by valves. Meggitt’s 500-ton draw press employs a VFD-controlled pump.

“Traditional constant-speed pumps tend to waste energy and fail to provide the required flexibility,” says Harrelson. “Servo-driven systems can work well, but too often are associated with prohibitive cost and complexity, especially at the power rating required for larger presses. Finally, a typical off-the-shelf VFD often lacks the ‘smarts’ needed to control and regulate a hydraulic system to the degree that press applications demand. Parker, however, recommended a drive that included the functionality needed to power our hydraulic system with the efficiency and capability required.”

The drive (Parker Hannifin’s AC890 drive) installed on the hydraulic pump of Meggitt’s new press allows the pump to operate at its optimum speed for each portion of the press cycle. The drive controls the pump’s electric motor, adjusting and regulating speed and torque to provide the necessary flow rate and pressure for the machine’s operation—and no more. The drive includes function-block programming and state machine logic, so with minimal development the press can be programmed for actual press sequences such as “return on pressure” or “return on position.”

Energy savings are verified by examining the press’s power usage over several operating cycles. By lowering the speed of the pump, less power is consumed versus traditional methods of hydraulic speed control. “And, by lowering energy cost, the effective cost of each drawn part drops proportionally,” confirms Krochmal. Finally, when only the power needed to perform the work is expended, the pressure drop throughout the entire hydraulic system is minimized, in turn reducing the cooling requirements needed to keep the press at optimal operating temperature.

Meggitt’s operators also benefit from a dramatic reduction in audible press noise, since pump speed is reduced for much of each press cycle. And, in addition to the pre-preventive maintenance features described above, a dramatic reduction in system pressure, facilitated by the drive, contributes to greatly extended component life.

“For example, forming a part required 1500 PSI during ram approach with a non-VFD-equpped press, while the actual value measured was only 90 PSI using the new press,” says Harrelson. “And where 1800 PSI was expected for a standard-system ram retraction, 380 PSI was witnessed within the VFD-controlled hydraulic press circuit.”

Finally, Beckwood’s system offered something of great importance to Meggitt, as it transitioned from its 1963 technology: Ultimate control over the press cycle. With a VFD that includes I/O and programmability, machine operating parameters such as ram-approach speed, force, hold time and ram-retract speed can accurately be set and maintained for repeatability. “Cycle times have been improved by over-speeding the pump during unloaded portions of the operating sequence,” says Krochmal. “And by improving cycle time, throughput increases.”

In addition to the baseline offerings, a ram safety catcher system (RSCS) provides secondary load holding of the ram at any position throughout the stroke. The RSCS is powered to the open position, allowing free travel of the ram in either direction. Upon a sudden loss of power, the ‘held-open’ RSCS immediately closes, preventing further movement of the ram at any point in the stroke.

The RSCS is managed by a Jokab Safety PLC, which monitors the performance of all safety valves, in addition to the RSCS. And for perimeter guarding, light curtains protect the front and rear openings of the press and expanded metal guards protect side openings.

“This is not just a piece of equipment; it’s a complete forming solution.” MF 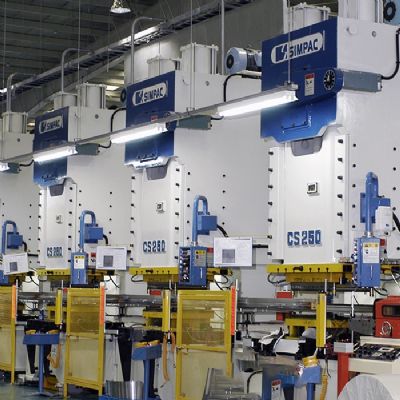 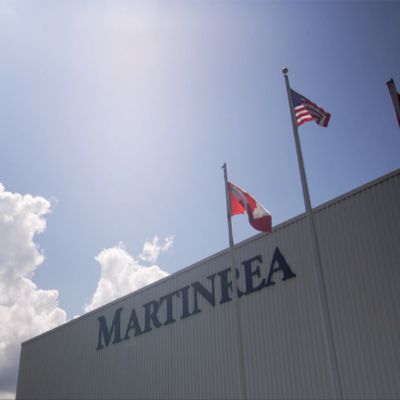