With the gettin’ good, the automotive industry has no time for downtime. Even running at full tilt, automotive OEMs have to maximize press performance. That’s Ford’s thinking, and with worn press-line components slowing production and requiring more and more maintenance, a change was in order. That’s why the Dearborn, MI-based automaker decided to embark on a program to switch out its aging mechanical transfer systems with state-of-the art servo-driven systems on its 2000-ton Komatsu presses at Flat Rock (MI) Assembly. Half a decade in, five lines have undergone retrofits, leading to a big boost in big-part production.

Churning out Ford Fusions and Mustangs, the 3,000-plus employees at Flat Rock hustle and bustle throughout the nearly 3-million-sq.-ft. plant. The problem: original transfer systems on the quarter-century-old presses, the mainstays in producing body panels, had seen better days.

“Most of the presses that we have are 20 to 25 years old, so after 15 to 20 years, the mechanical transfers were wearing out,” says Steve Sparkes, project manager-press equipment engineering in the stamping business unit at Ford. “Joints start to wear out, and you start to get a little slop, which can cause interference conditions. Once that happens, maintenance time and costs start to rise. We regularly fix and maintain the transfers with performed maintenance, but at the end of the day they were tiring out.”

The old transfers at Ford Flat Rock, dating from the late-1980s, utilized large shafts driving down from top portions of single- and dual-ram presses to mechanical cam boxes. Over time, Ford would rebuild the cams and other mechanical components, but downtime became more and more of an issue. And even with the rebuilds, speed eventually suffered.

The transfer challenges were such that in 2009, Ford embarked on a replacement program, swapping out the old with new floor-mounted electronic transfer feeds (ETFs). Linear Transfer Automation, Barrie, Ontario, Canada, replaced all five, beginning in 2010, with the latest ETF entering production this past July.

As was the plan, the new transfers have brought greater speed and increased flexibility to the press lines at Ford Flat Rock.

Critical to upping transfer speed with the ETFs is the ability to add motion range profiles.

“For example, at Flat Rock, the old transfers performed big, square moves …basic motions,” explains Paul Stirrett, vice president of sales for Linear Transfer Automation. “On one of the lines, the old transfer only could provide 350 mm of lift, and Ford asked for 400 mm. We added that, which proved essential for new dies coming in for Mustang production.”

Such an increase in range assists as Ford adjusts motion profiles.

“Instead of the big, square moves required with the old mechanical transfers, the ETFs can round out curves,” Stirrett says. “With electronic servo-operated movement, we can round out the lift, grip and pitch motions to allow a smoother motion profile when transferring parts, which adds speed.” Sparkes agrees.

“With electronic transfer, we can start to change profiles to increase jobs per minute,” he says. “The mechanical transfers limited us to in-out and up-down motions. With electronics, we can look for transfer shortcuts. For example, as the transfer rises, instead of performing a complete rise before any other movement, it can begin to advance at the same time. We are looking for ways on each job to make the transfer stroke more efficient.

“As it is, electronic transfer is a little faster,” Sparkes continues, “and it takes some of the load off of the press. Where mechanical parts of the transfer had been driven from the same press motors that power everything else, we now can release some of that press energy for use only on the press and at the same time quicken the transfer motion.”

The ETFs also enable Ford, if it chooses, to add efficient pick-and-place motion to presses that never used such movement.

Retrofits in Buffalo and Mexico, Too

Ford’s transfer upgrades are not limited to Flat Rock. The company’s Buffalo stamping plant recently has gone through a press-controls upgrade—replacing 20 to 25-year-old control technology—across eight presses, with one also receiving a Linear ETF. Ford opted to maintain its current press-control setup at Flat Rock, as those systems are much newer, according to Sparkes.

The press line at Buffalo boasting the new ETF runs new aluminum-part dies for the F-150. 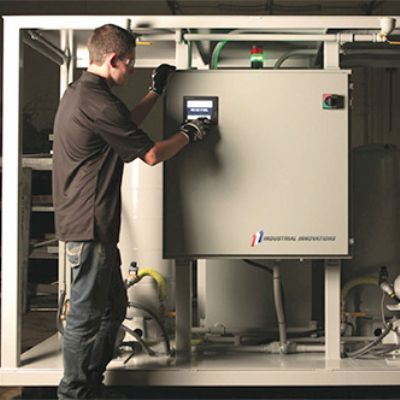