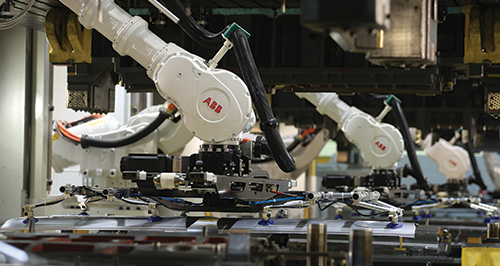 Long the purview of automotive OEMs and Tier Ones, robotic press tending has filtered to lower-tier suppliers not only in automotive, but across sectors including appliance and general industrial. Why? As Toni Roda, global product manager-press automation for ABB points out, the flexible robots of today better interact with presses and other machinery, offer reliability in harsh environments, and can be designed, integrated, programmed and operated more quickly and at lower cost. We’ll detail all of that, but deciding when and where to incorporate robots for tending presses and workcells deserves an initial look.

The following cases, according to Roda, call for consideration of robotic machine tending:

“Incorporating robots into new a press line represents the best possibility for optimal productivity, as the line layout can be optimized for output,” according to Roda. “Compared to hard automation and linear feeding machines, robots adapt easily to different layouts and functionalities, thanks to the technology’s inherent flexibility.”

“In such cases, the use of external linear or rotational additional-axis robots, such as ABB’s IRB7600FX or IRB7600RX models, and the selection of the right end-of-arm tooling play key roles in obtaining top performance of installed press-line assets,” he says. “Robots can adapt easily to a range of production variations such as double, triple or quadruple picks-and-drops, increased distance between parts during press-to-press transfer, or the extraction of semifinished parts prior to the last press in a line.”

Robots also provide an ideal solution for handling of smaller parts―traditionally not associated with press automation.

“Applications include back covers for flat-panel televisions, air-conditioner components and other parts often produced on smaller press lines,” says Roda. “Instead of larger automotive panels produced at line speeds of 10 to 14 strokes/min., these parts move at 18 to 20 strokes/min. or faster, and robots readily handle those types of parts and line speeds.”

“In some cases, such as in a press cell, the same robot performs perhaps three different tasks,” Roda explains. “A robot may be responsible for internal transfer of parts between the stages inside of the press, and later on must transfer these part to a polishing center or welding operation. Such nonlinear applications point to the flexibility of robotic automation. The robotic-handling possibilities here are endless.”

Beyond the robots themselves, metal formers also may consider inclusion of related part-handling components when automating operations. Where part-transfer equipment once employed “spiders,” as Roda calls them, referring to perhaps 2 by 3-m frames with suction cups to transport panels, today, robots make use of short “antennae,” or arms with suction cups on the ends. These structures also may be constructed of carbon fiber rather than aluminum. Overall, these developments reduce space and weight while providing the same holding capacity, enabling more flexibility in transfer position and speed.

While adding robots to a press line or workcell always will require physical installation of equipment, mechanicals and cabling, the advent of integration software and simulation, along with offline programming, has reduced integration from weeks for small and medium-sized projects to only a couple of days in many cases.

Advances in computing power bring the ability to offer sophisticated software that trials robot integration into press lines and workcells without causing downtime and necessitating time-consuming onsite work, with all of the associated costs. Roda cites ABB’s RobotStudio as an example. The computer-based programming system, showcased by ABB at FABTECH 2019, allows programming to be performed on a computer without disturbing existing production. Integrators can communicate with customers and involve them closely through all phases of robot integration, from design through commissioning, according to ABB officials, resulting in more quickly designed systems and higher productivity. Built on the ABB Virtual Controller, an exact copy of the real software that runs robots in production, RobotStudio reportedly ensures that everything in the virtual world works exactly how it will in the real world, by using real robot programs and configuration files identical to those used on the shop floor. Realistic graphics display tooling, movements and throughput, enabling users to verify tooling, cycle times, work envelopes and product throughput before any construction begins.

Such software affords the opportunity to test multiple configurations on a PC, according to ABB officials, and new products can be added to existing lines in the virtual programming environment without disturbing existing production.

“Years ago, robot integration meant physically being at the press and in front of the robots at a stamper’s facility to determine the correct location and to conduct robot programming,” Roda says. “We needed to be connected to the real robot and the actual manufacturing equipment. Today, in advance, we prepare PLC and robot programs as well as safety features, and test everything via simulation tools. Then, it’s only a matter of loading the new programs into the robot onsite.


To ensure that robots operate effectively in press lines, communication and synchronization are key.


“At the end of the day, every second matters and the closer the relation between robot kinematics and those of the press, the more productive the process becomes, perhaps bringing a second or millisecond of difference, which adds up greatly over a job run,” Roda says. “As slaves to the presses, robots can work with them in a coordinated manner. While not difficult with stroke-by-stroke presses (mechanical or servo-driven), timing robots with presses running in continuous mode demands a different type of coordination, which, for example, ABB is integrating in some new lines.”

Ultimately, successful integration of robotic automation in press and related workcell operations depends on much more than speed.

“I always say that automation is about much more than speed,” Roda says. “Not only must a part quickly move from point A to point B, but it must do so reliably, which relates to line uptime. Then, the part must exhibit the required quality. Quick production of parts with high uptime but low quality is not good. Proper automation delivers a balance of speed, reliability and quality.”

Inclusion of robots for press tending offers numerous advantages as detailed above, and also provides a solution to the shortage of skilled labor.―“Not only the skilled-labor shortage, but the fact that employees constantly rotate out of press lines make robotic press tending an ideal solution,” Roda says. “Easing the inclusion is the availability of software that simplifies robot programming and operation.”

An example: RobotWare StampApp, part of ABB’s StampPack software for facilitating automation of stamping cells. StampApp allows users to integrate, program and operate robotic stamping cells, features a graphical assistant that enables users to perform robot teaching without specific programming knowledge. Cell operation becomes intuitive thanks to a graphical human-machine interface (HMI) that provides clear process information, according to company officials. And, both HMI and programming can be adapted, through the StampApp configuration tool, to varying cell setups and production processes.


With so many developments in robotic press and workcell tending, the technology deserves a new look from metal formers, who would do well to keep total cost of ownership in mind during assessments.


“From the engineering and commissioning phases to line operation and maintenance,” Roda concludes, “robotic press lines cost considerably less than dedicated machinery such as linear part feeders and other hard automation.” MF 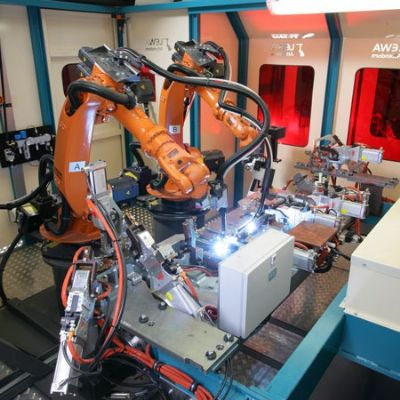 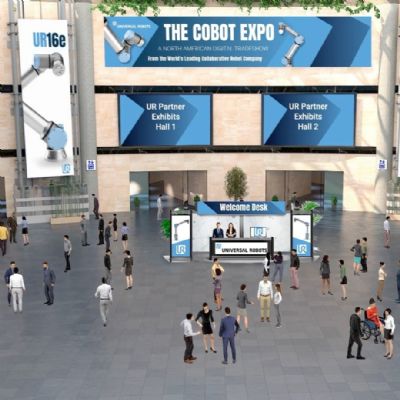