Good, stable pricing of agricultural commodities such as grains over the past few years has meant steady demand for grain-storage and-handling systems and equipment. That’s good news for suppliers in this sector, including Sukup Manufacturing Co. However, rising steel prices and a dearth of skilled labor have proved challenging—a common refrain in the metal forming and fabricating world. Helping to meet such challenges, and specifically to fulfill increasing customer demand, have driven the company to increasingly explore and implement automation. One of the latest automation additions at the Sheffield, IA-based manufacturer, to meet said demand: a Yaskawa Motoman robot that destacks blanks and tends two stamping presses to produce flooring supports for use in grain-storage operations. 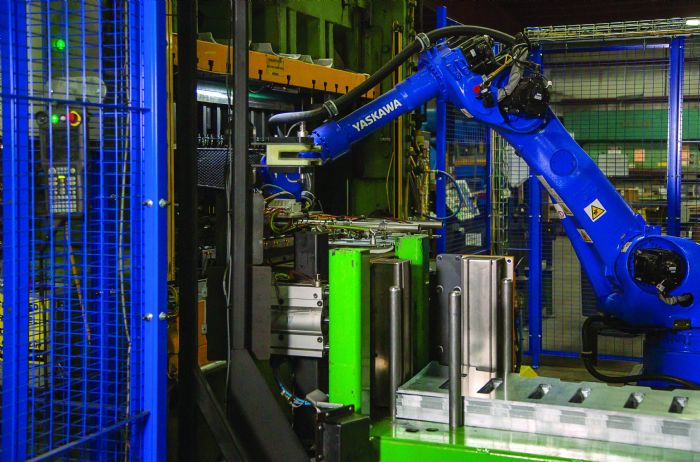 “Here’s a fun stat,” Steve Sukup, company president and chief executive officer, tells MetalForming: “Since we brought in our first robot in the 1990s, we've more than tripled our employment. It’s not a case where robots take jobs away, they just allow people to better utilize their skills.”

Employees at Sukup Manufacturing now number 750, across 1 million sq. ft. of operations space at locations in North America and Europe. That’s a far cry from 1961, when Eugene Sukup, Steve’s father, bought his first grain bin to dry and store shelled corn for his small farm. But heating the grain to dry it was hit and miss back then—a bottom-located heat source dried grain at the bottom but grain at the top would crust and spoil.

“Dad always compared it to a kettle of beans on the stove…when you turn the heater up, the bottom would burn and the top would still be cold if you didn’t stir it,” Steve Sukup recalls. “So he developed an auger stirring machine that mixed the grain to dry it faster and more evenly.”

Building on this idea, Eugene modified a stoker auger from a coal furnace, powered it with an electric drill and hung it from the top of the bin to loosen the hot spots and prevent spoilage. He continued tinkering, and hit on the idea of automating the setup by adding a horizontal auger through the handle of the drill to make it automatic. Eugene patented it as the Stirway stirring machine and, with his wife Mary, founded Sukup Manufacturing Co. in 1963 as a small weld shop. In 1970, the company moved across town, occupying 30,000 sq. ft. of manufacturing space at its current headquarters site in Sheffield.

“I was raised on a farm, have been involved with 4H, and climbed a grain bin for 50 yr.,” Sukup says, noting that he still enjoys these things, but has developed a real passion for metal working. “By sixth grade I could weld and operate a torch. I’ve always enjoyed making things and seeing what I’ve made. That’s what metal forming is all about—you take a piece of metal and transform it into something that's useful or something that you like to look at.”

In 2020, in the midst of a two-decade run of growth, Steve Sukup ascended to his current position. 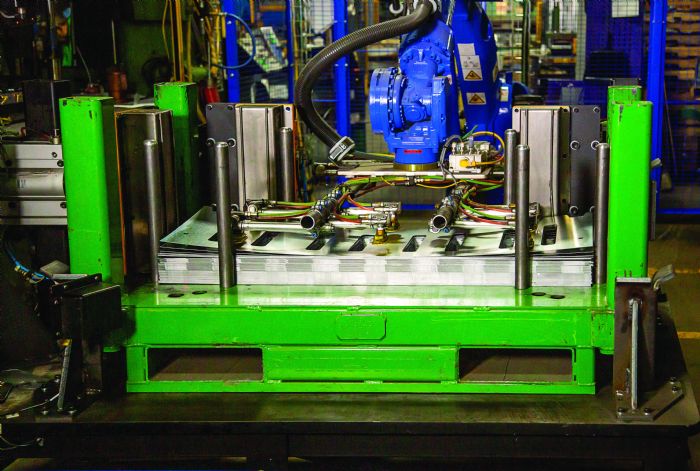 “Our company has grown 10 times larger in the last 20 years, with this growth driven by the realization of four new product lines that we developed, engineered and incorporated into our manufacturing processes,” Steve Sukup says.

What spurred this growth: realizing that doing the same thing over and over is not ideal, aided by a quest to seek out  new methods of manufacturing.

Steve remembers years ago attending equipment auctions with his dad and buying a used punching machine and a few milling machines—effectively introducing the business to NC technology.

“From that, we’ve grown to running CNC vertical and horizontal machining centers, and CNC lathes,” he says. “We use lathes to make all the shafts, from 1- to 6-in. dia., for our bucket elevators. And, we now have 12 laser cutting machines onsite as well as equipment for coil processing.”

Also, the company’s inhouse tool and die department, with a staff of eight, handles 90 percent of Sukup Manufacturing’s tool build and repair needs. And, the company routes its finished products via its own distribution operations and truck fleet.

Sukup Manufacturing began its relationship with Yaskawa Motoman through booth visits at FABTECH and other trade shows more than two decades ago, and today boasts 20 of the supplier’s robotic welding systems, augmenting the company’s capable and experienced welding personnel, according to Sukup.
In the spring of 2021, needing high-quantity production of an inhouse patented sheet metal flooring support, Sukup Manufacturing again reached out to Yaskawa Motoman to help with a manufacturing solution.

The result: A Yaskawa Model GP180 robot for automated press tending (the company also boasts metal stamping proficiency), replacing manual blank and part loading and unloading. Specifically, the robot destacks 20-guage steel blanks, using an embedded thickness gauge to confirm single-piece pickup, and places a blank in a 300-ton mechanical press housing a forming die. Following the press stroke, the robot removes the workpiece, now a tube section, and places it in a hydraulic press to produce a 12-in. bend. The 13.25-in.-long finished part is manually unloaded and pallet-stacked while the robot begins the cycle anew with blank destacking.

“This automates what had been three manual operations,” Sukup says, noting again that such automation frees personnel for other duties. “Cycle time saw a 30-percent improvement, but the real payback was going from three operators to one, allowing us to use the other two operators in other departments.”
The six-axis GP180 robot handles payloads to 180 kg, and offers a horizontal reach surpassing 2700 mm with a vertical reach of nearly 3400 mm. A streamlined robot upper arm eases access to parts in confined spaces, according to Yaskawa Motoman, while a wide wrist-motion range reduces interference with fixtures—this reduced interference design enables placement of the GP180 in close proximity of work zones, meaning less floorspace required in cell operations.

Dual-part specialty handling was designed through coordination with Motoman, with end-of-arm tooling developed to first handle blank placement, then rotate to place the formed piece for the final forming process.

This robotic press-tending application has worked so well that Sukup Manufacturing is duplicating the setup at another company location. And, Sukup reports bringing Yaskawa Motoman back in to tap its expertise to assess further automation opportunities to gain uptime on the 300-ton press.
“That’s the fun part,” he offers. “We know that the system works great, but how can we do it better and faster? We have good people inhouse and we can design and build a lot of things, but Yaskawa Motoman really closed the loop on this particular application to make it a production-worthy system.” MF


Fab-Shop Automation, Other Exciting Technology on Display in... 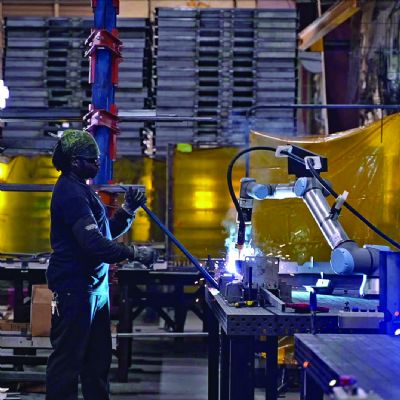 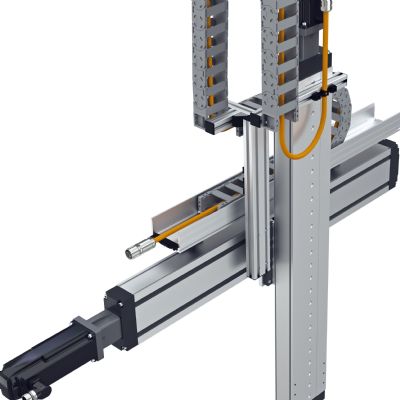