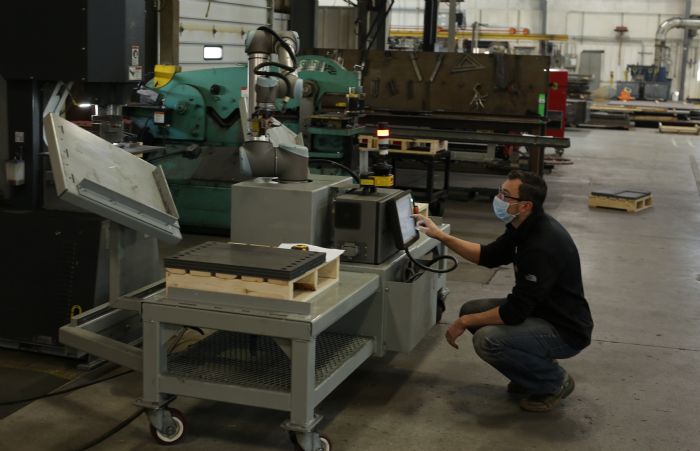 “Welding has become one of our bottlenecks,” he says. “We need that skill here, and it always seems like we’re short of welders.”
One option to address the welding-skills shortage, traditional welding robots, proved, based on experience, a no-go at Siouxland Fabricating.

“Traditional welding robots require a lot of fixturing and programming, and a lot of tweaking between our robotic programmer and our welding machine,” Boogerd says, adding that investment in a traditional welding robot can run into the hundreds of thousands of dollars. “And, the robots take up a lot of floor space. We were looking for something simple that we could integrate quickly in the shop and start making parts.”

Siouxland Fabricating management wanted its welders to spend more time fabricating and putting parts together and less time laying beads.
“We really wanted the robot to mimic what a manual welder was capable of doing, from circular welds to butt joints,” says Boogerd. 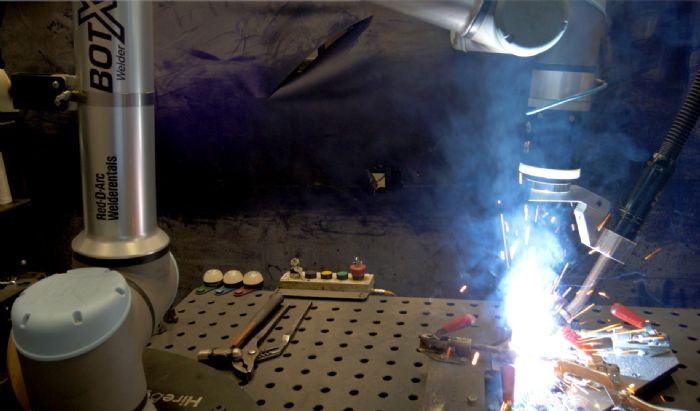 Successful deployment of a Universal Robots (UR) UR10 collaborative robot (cobot) in a stamping application gave Siouxland Fabricating familiarity with the performance, usability and flexibility of cobot-powered automation.

“Stamping proved a perfect application to introduce a robot, but we didn’t want to use traditional robots with a really big cell and all of the extra expense of safety guarding,” Boogerd says, “so we tried a UR cobot. Today, that cobot helps stamp parts all day long.” For stamping, the cobot inserts a blank into the press, actuates the machine to stamp it, and then palletizes the part.

“We use the built-in palletizing wizard on both sides of the cobot,” reports Boogerd. “Once we go through the cobot movement one time, the graphical wizard simplifies programming. As a high-mix low-volume shop, we may run 500 of the same part through, or we may run 20 pallets of different parts through, and the beautiful thing is, once we program the job, it’s done—the operator only must pull up the program, change out the die and hit go.” 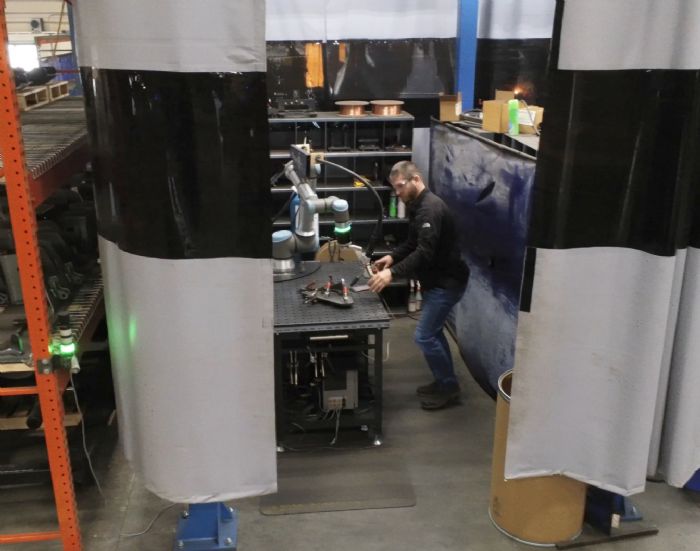 Following this positive cobot experience with stamping, it was a small step for Siouxland Fabricating management to ask, “Can we stick a welding arm on the end of our UR cobot and make it weld?”

Boogerd’s research of cobot-powered welding solutions led him to the BotX-Welder, developed by Hirebotics, Red-D-Arc, Airgas and Air Liquide.
“I instantly liked its mobility, ease of use and programming features,” he says.

BotX comes with a UR10e cobot, a Miller Electric XMT welding machine (350 or 450 amps) and various table configurations, along with the Hirebotics software application that enables simple and intuitive programming by welders.

Quick setup allowed Siouxland Fabricating to program production welds on the BotX-Welder in next to no time, Boogerd reports.

“We took our typical weld parameters for our Miller welding machines and were ecstatic to be producing parts within half a day,” he says. “We had a manual welder along with our traditional robot programmer both learning and using this new welding system.”

Welders at Siouxland Fabricating soon were programming complicated welds using a combination of hand-guiding and the Hirebotics smartphone application.

“We use iPhones to program the cobot—very structured and step-by-step,” explains Boogerd. “When we move the cobot arm, we hit a button on the cobot and it saves that location. Traditional programming would require pendants and movements, and understanding of coordinates. This takes all of that away.” 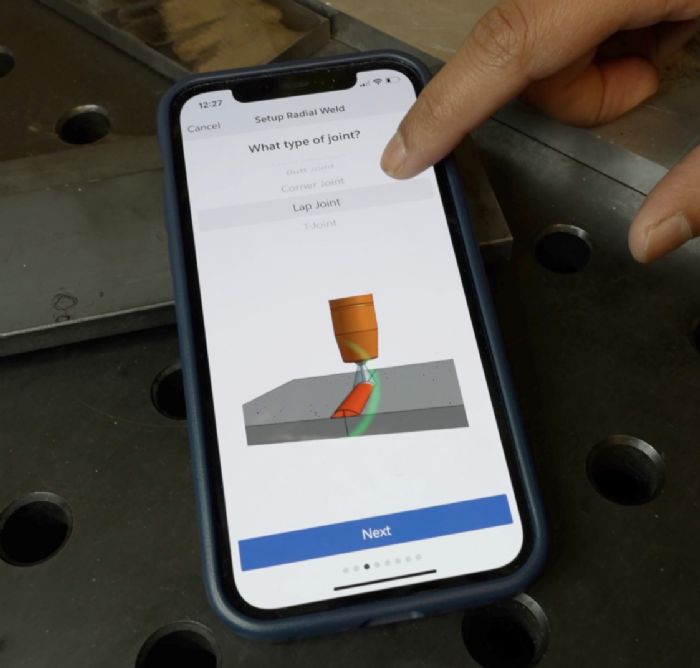 When programming its traditional welding robot, Siouxland Fabricating had to assign a robot programmer and a welder to the task. Conversely, the cobot-welding setup can be operated by a welder alone.

“BotX enables us to let the welder move the cobot and create the program on the fly,” Boogerd says. “We always had hoped for this, and we found the solution. I can weld on this system, too, even though I can’t hand-weld.”

Corrective positioning on the cobot-welding system takes care of positioning and the weld angle, “which is everything in welding,” says Matt Van DeKamp, Siouxland Fabricating weld robot supervisor and programmer. “I no longer need the help of the manual welders, or their opinions of how they would hold the torch. That’s a big deal, and I feel a lot more like a welder.”

The usability of the cobot-welding application also removed nervousness around automation, according to Dan DeMeester, maintenance and welding supervisor.

“The BotX literally has three buttons that we have to know,” he says. “Our traditional robots take much longer to program. BotX takes 15 min. to program for a part versus a couple of hours on a traditional robotic welding setup. I can program it, set the schedules, run it myself and make sure that the part’s good. This turned me into a programmer.”

Hirebotics chose the UR10e to power the BotX, according to Mitch Dupon, director of business development at Hirebotics, by offering “the best balance of reach, mobility and portability. The UR10e has force torque sensing built into the six axes, which we use for various features in our cobot, and its open architecture allowed us to build the software out how we wanted. And, UR constantly updates its products, as do we. For example, UR rolled out path offset, and we used that to develop a high-quality weaving feature for our customers.”

In addition to traditional welds, the BotX cobot-welding system performs more complicated welds, such as weaving, as mentioned by Dupon, and pulsed welding.

“Traditionally, we performed only two or three weld passes because we didn’t understand how to use some of those more advanced features,” explains Boogerd. “But this system allows us to use the weaving feature, which cuts cycle time in half. It also saves on consumables, as we’re not laying extra gas and bead.”

The ability to program the cobot-welding system to weave on a double pass enabled Siouxland Fabricating to reduce cycle time on one part from 5.5 min. to less than 2.5 min., according to Van DeKamp.

“I now pulse and weave on probably seven different programs,” he says, which enables reduced cycle times on those programs as well. “I also have taken the advanced welds learned on the cobot and placed them on our traditional robots.”

Ease of use and reduced cycle times via cobot welding also has freed Siouxland Fabricating associates to focus on more ergonomic, higher-value tasks.
“Welders do not like to perform some of the welds—perhaps a circular weld that becomes very tedious on the wrist and joints, or welds that involve a lot of bead-laying and keeping hands steady,” Boogerd says. “Following the BotX deployment, welders can focus on fabricating and tacking, while the robot lays the bead. This transfer of labor to the cobot system improves cycle times, as the system stays busy while an operator works on something else. In the end, we see more production going out of the door because I have the cobot-welding system working without an operator having to babysit.”

Given the success of its cobot-welding deployment, Siouxland Fabricating plans to add another welding cobot to its fleet.

“We’ve seen the advantages and production just keeps increasing,” Boogerd concludes. “And, instead of having to seek out scarce welding talent, we can utilize that time with the cobots.”

The company also plans to test its stamping cobot on machine-tending tasks involving CNC machines, mills and lathes, with a view toward adding more cobots to that side of its business. MF 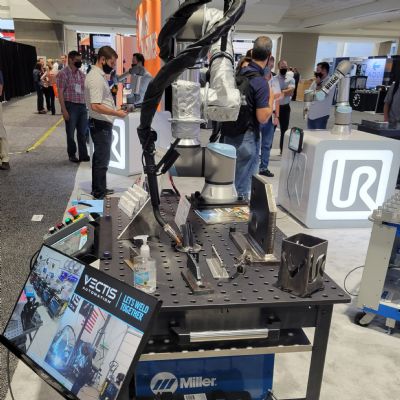 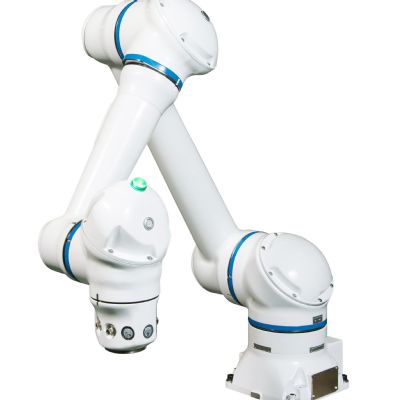